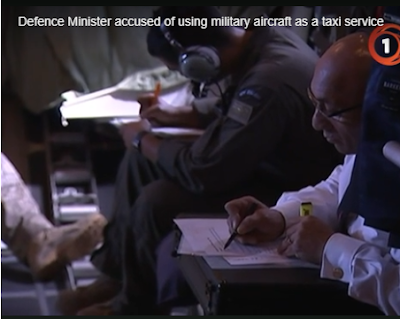 Good grief. The National Party’s attempted attack on Ron Mark would be farcical if it weren’t so downright facile. They’re claiming Defence Force aircraft were illegitimately used to transport Ron to official commitments in his capacity as Defence Minister from “Mark’s hometown, Masterton”.

That’s ridiculous for a start. I thought *everybody* knew that Ron hails from Carterton (where he was the incredibly popular local mayor before his re-entry into national politics). Although given that National only seems to discover the Regions – and the Wairarapa in particular – once they’re relegated to Opposition, we can perhaps forgive them for confusing two different towns in their breathless rush to seem relevant due to a lack of familiarity.

But leaving aside the Member for Rodney’s evident difficulty with toponyms, political history, and basic New Zealand geography … as soon as we take a look at the facts of the allegation against Ron Mark, it quite rapidly becomes apparent that Ron doesn’t appear to have done anything wrong.

The list of flights at-issue which appeared in the NZ Herald’s coverage of this tawdry not-scandal confirms this (as does an official statement indicating it’s cheaper for the Minister to travel by air rather than car for the sorts of events which have been cited).

I mean, seriously. It is bizarre in the extreme to take issue with a Defence Minister being on board a regularly scheduled flight to Antarctica which departed from and then returned to Christchurch (unless, perhaps, Mitchell’s understanding of New Zealand cartography is so ill-fitting that he thinks that too is somewhere near Carterton and Masterton .. on account of its rather famous inhabitant, “Anderton“). And with deference to Mitchell’s repeated commentary about how Ron ought apparently to have used Crown cars instead of helicopters – I can only ponder whether Mitchell knows something I don’t about the amphibious capacity of the former.

After all, how else to attempt to explain Mark Mitchell seemingly prescribing them as a means to get from the South Island to the HMNZS Canterbury – and thence, yes, to Masterton. Or, for that matter, to and from the Chatham Islands in the company of a number of other Ministers, Media, and Defence Force personnel for a Maori Battalion funeral. Are these Crown cars actually airlift-capable extra-capacity busses or something?

Meanwhile, I do not seem to recall Mr Mitchell raising issue with John Key using a Defence Force Iroquois helicopter to transport himself from a V8 car-racing event to a golf club dinner; or to be ferried from Blenheim to Kaikoura to launch a whale-watching boat, or any of the rest of it.

In fact, I’d perhaps go so far as to speculate that one of the reasons why Defence Force transport aircraft seemed to be breaking down so frequently during the tenure of the previous National-led Government … was precisely because John Key seemed to be using them curiously often, rather than going with commercial airlines.

Although one of the most peculiar uses of a helicopter here in recent times is unquestionably former National Party President Michelle Boag having the Westpac Rescue Helicopter make a rather expensive trip to Waiheke Island to pick up her passport so she could make an international flight after she left it behind.

I rather suspect that Mark Mitchell is still smarting over his failure to win the National Party’s leadership contest, and is therefore seeking to take out his ire at Mark in lieu of doing something useful.

In any case, as this is apparently such an extraordinarily pressing issue for Ron’s predecessor as Defence Minister, Mark Mitchell, I look forward to the results of Ron’s upcoming audit of previous use of Defence Force aircraft by prior Defence Ministers. It will be interesting indeed to see in greater detail how the National Party’s highly placed functionaries have been making use of military assets during the past nine years.

Perhaps we shall find out that Mitchell’s absurd accusations against Ron are merely what psychiatrists would term “an exercise in projection“.