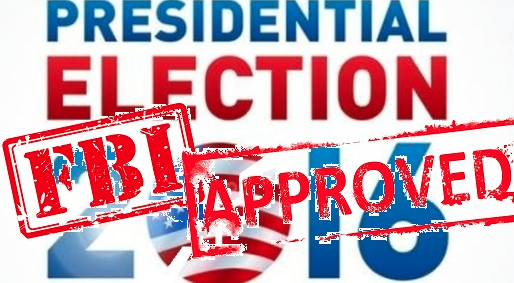 Two days ago (28 October), FBI Director, James B. Comey, sent a letter to the US Congress disclosing that  the Bureau was investigating newly-discovered emails from disgraced former US Congressman, Anthony Weiner.

The new  material  “appeared relevant” to the Hillary Clinton private-server/email case, according to Comey. In an explanatory email to FBI employees, Comey wrote;

“This morning I sent a letter to Congress in connection with the Secretary Clinton email investigation.  Yesterday, the investigative team briefed me on their recommendation with respect to seeking access to emails that have recently been found in an unrelated case.  Because those emails appear to be pertinent to our investigation, I agreed that we should take appropriate steps to obtain and review them.

Of course, we don’t ordinarily tell Congress about ongoing investigations, but here I feel an obligation to do so given that I testified repeatedly in recent months that our investigation was completed. I also think it would be misleading to the American people were we not to supplement the record.  At the same time, however, given that we don’t know the significance of this newly discovered collection of emails, I don’t want to create a misleading impression.  In trying to strike that balance, in a brief letter and in the middle of an election season, there is significant risk of being misunderstood, but I wanted you to hear directly from me about it.”

The political version of an atomic-bombshell came eleven days before the US Presidential Election (early voting in several states notwithstanding) on 8 November.

“Of course, we don’t ordinarily tell Congress about ongoing investigations…”

Comey tried to justify his disclosure to Congress;

But in his rambling note, he then revealed;

“…however, given that we don’t know the significance of this newly discovered collection of emails…”

And then pointed out the blindingly obvious;

“I don’t want to create a misleading impression…”

Director Comey had already created “a misleading impression“. By publicly announcing the “re-opening” of the investigation and referencing a “connection with the Secretary Clinton email investigation“, irreparable damage had been done to Clinton’s campaign and Trump’s presidential chances suddenly took on new life.

“Justice Department officials are instructed to refrain from commenting publicly on the existence, let alone the substance, of pending investigative matters, except in exceptional circumstances and with explicit approval from the Department of Justice officials responsible for ultimate supervision of the matter,” the letter says.

They are also instructed to exercise heightened restraint near the time of a primary or general election because, as official guidance from the Department instructs, public comment on a pending investigative matter may affect the electoral process and create the appearance of political interference in the fair administration of justice.”

Lynch expressed her preference that Comey follow the department’s longstanding practice of not commenting on ongoing investigations, and not taking any action that could influence the outcome of an election, but he said that he felt compelled to do otherwise.

The response from both Republicans and Democrats has been unrestrained anger. Senate minority leader Harry Reid  was unequivocal in condemning Comey’s behaviour;

“Your actions in recent months have demonstrated a disturbing double standard for the treatment of sensitive information, with what appears to be a clear intent to aid one political party over another.

My office has determined that these actions may violate the Hatch Act, which bars FBI officials from using their official authority to influence an election. Through your partisan action, you may have broken the law.”

What is even more startling is that at the time that Comey made his disclosure to Congress (28 October), it was not until two days later that the FBI  obtained a warrant to actually look at the emails on Weiner’s computer.

So on what basis did Comey feel the need to advise Congress?

When Comey sent that letter, he had no way of knowing what the emails contained. For all he knew, they could have been recipes for apple pie.

In which case, Comey has single-handedly interfered in an election process by using the power of his position.

Which would be an abuse of power.

Which would be a situation that we here in New Zealand would be intimately familiar with;

As the NBR reported over this incident in November 2014;

Security Intelligence Service director Rebecca Kitteridge has made a formal apology to former Labour leader Phil Goff for the way in which the SIS released “incomplete, misleading and inaccurate information” in response to an OIA request from Whale Oil Blogger Cameron Slater.

In 2011 Mr Goff said he hadn’t been briefed about alleged Israel spies being caught in the Christchurch earthquake earlier that year, a contention Prime Minister John Key and then-SIS director Warren Tucker disputed.

Dr Tucker’s briefing notes were declassified, then swiftly released to Mr Slater after he requested them under the Official Information Act.

The notes appeared to confirm Mr Goff had been briefed on the matter but Ms Gwyn’s investigation has established this was not the case.

The apology to Mr Goff is one of the recommendations in the report of inspector-general of intelligence and security Cheryl Gwyn, which stated “These errors resulted in the misplaced criticism of the then leader of the Opposition, Phil Goff. Phil Goff is owed a formal apology by the Service.”

Although Ms Gwyn found no evidence of political partisanship by the SIS, its actions did have a politically partisan effect and she found the agency had failed to take adequate steps to maintain political neutrality.

Prime Minister John Key is “in denial” over a report which backs Dirty Politics allegations his staff used information from the SIS to orchestrate a smear campaign against former Labour leader Phil Goff, the Opposition says.

Inspector General of Security Intelligence Cheryl Gwyn’s report yesterday found primarily that former SIS director Warren Tucker was at fault for supplying “misleading” information about Mr Goff to the Prime Minister during a 2011 war of words between the pair.

Mr Goff claimed he had not been briefed by Dr Tucker about suspected Israeli agents in Christchurch at the time of the earthquakes earlier that year. However, based on the information supplied by Dr Tucker, Mr Key said he had been briefed.

Ms Gwyn’s report said the information supplied by Dr Tucker about the briefing was “incomplete, inaccurate and misleading” and “resulted in misplaced criticism” of Mr Goff. It also found that after learning of the information, Mr Key’s deputy chief of staff and primary point of contact with the SIS, Phil de Joux, suggested to Mr Ede the information “might prompt an OIA request”.

Mr Ede then gave that information to Slater, discussed how an Official Information Act request should be worded, and provided Slater with draft blog posts attacking Mr Goff.

Ms Gwyn’s inquiry found Mr Ede was on the phone to Slater when Slater emailed his OIA request to the SIS.

Patrick Gower from TV3 was his usual ‘delicate’ self when he expressed his assessment of the politicisation of the NZSIS  by the National government;

3 News understands the spy agency and Prime Minister John Key’s office were found to be in cahoots with Slater to get the information out.

It was sensitive information that embarrassed Mr Goff, pertaining to the issue of supposed Israeli spies Mr Goff said he didn’t know about, though he had been briefed about it.

The report deals with how the information got out, and that is through former SIS director Warren Tucker. Mr Tucker is found have been unfair and politically partisan in the way he dealt with the Prime Minister’s office to get it out, according to 3 News’ understanding of the report.

Then-head of the SIS, Warren Tucker, used his position to embarrass the Leader of the  the Labour Party, just months out from the 2011 General Election. It was done with the full knowledge of members of John Key’s staff. Our esteemed Dear Leader was probably fully aware of the plot.

No wonder the Comey Affair seemed so hauntingly familiar when news of it broke.

Because FBI Director Comey has his own political affiliations;

Even though he has been a registered Republican for most of his adult life, FBI Director James Comey testified Thursday that he is no longer a registered member of the GOP.

“Although our politics are different — I gather you’re a Republican — that correct?” Rep. Gerry Connolly (D-Va.) asked Comey in prefacing his remarks.

Comey responded, “I have been a registered Republican for most of my adult life, not registered any longer.”

The FBI director, who previously served as deputy attorney general in George W. Bush’s administration before President Barack Obama appointed him to his current position, donated to the presidential campaigns of John McCain in 2008 and Mitt Romney in 2012.

You two would appear to have a bit in common.

The Guardian: Clinton emails inquiry – FBI gets warrant as Comey told he may have broken law

The Pundit: John Key – The buck doesn’t stop with me