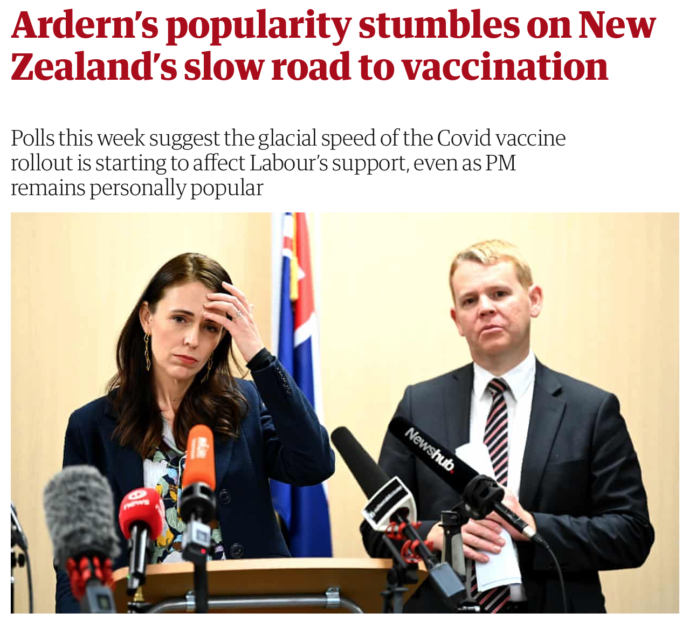 According to The Guardian, Labour’s collapse in vote is all because the vaccine roll out has been slow????
What?
The vaccine roll out is coming up to its crunch time now, but it hasn’t been the main issue and even if it was, National would have benefited, but it didn’t!
The alienating woke Hate Speech issue that is being compounded by a millennial trigger level threshold for outrage is pushing Labour male voters into the arms of ACT who are seen as championing free speech – this isn’t mentioned once in the column.
That shouldn’t surprise anyone,  The Guardian we’re caught flat footed like this over Brexit as well. They refused to see that their own woke position on Brexit blinded them from how their own activism/journalism contributed to that result.
Brexit happened Woke young online Labour UK activists savaged Northern Labour voters for being too stupid to understand why remain was better, those older Labour voters became alienated by those woke younger activists and voted Brexit out of nationalism and spite for the younger activists.
It was the first case of ‘proxification’ where activists alienate voters away from progressive parties because their online activism is simply too abusive.
The Right look for recruits, the Left look for traitors. Labour in NZ just lost 18% of their support in 1 month, if you can’t comprehend the magnitude of that, you probably shouldn’t be commenting on NZ politics!