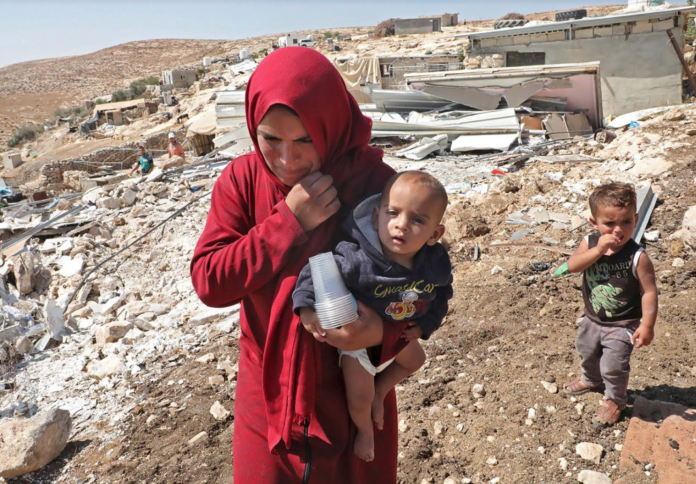 Last month, in answer to a Parliamentary question in the UK, the Conservative MP James Cleverly replied, on behalf of the Secretary of State for Foreign, Commonwealth and Development Affairs, that the “UK regularly raises the issue of demolitions and forced evictions of Palestinians from their homes with the Government of Israel” and noted further that such “demolitions and evictions are contrary to International Humanitarian Law. This recognition that Israel regularly violates international humanitarian law raises a further obvious question: So why doesn‘t the UK Government and its allies take action to call Israel to account?

At 3pm on 28 July, Israeli soldiers shot Mohammad Mo’ayyad Bahjat Abu Sara, aged 11, as he sat inside his father‘s car, near the entrance to Beit Ummar, Hebron. Five hours later in hospital, Mohammad died from chest wounds and bleeding in his lungs. An eyewitness testified that the soldiers had fired on the vehicle at least 13 times at a distance of approximately 50 metres. A B’Tselem video shows the vehicle was fired upon after it had backed up. Mohammad is the eleventh Palestinian child to be shot and killed by Israeli forces in the Occupied West Bank since the beginning of this year.

Defence for Children International Palestine (DCIP) reported the attack, much to the fury of the Israeli Occupation forces, who broke into the DCIP office at 5am the next morning. During the raid, more than a dozen Israeli soldiers seized possession of six computers, two laptops, hard drives and the files on Palestinian child prisoners that DCIP represents in Israeli military courts.  Of course, the Israeli forces left no indication as to reason for the raid nor did they leave any receipts for the seized documents and equipment.

At Mohammad‘s funeral the following day, one the mourners, Shaukat Awad, was shot in the head and abdomen by Israeli forces and died later in hospital. According to the Palestinian Red Crescent, at least 12 people were wounded by live ammunition at the funeral and there were several casualties from rubber-coated bullets and tear gas grenades.

On 2 August, Israel’s Supreme Court avoided handing down a ruling on a case in which Palestinian families, from six homes in the Jerusalem neighbourhood of Sheikh Jarrah, were threatened with eviction. Israel‘s Attorney General, Avichai Mendelblit, had already refused to submit a legal opinion to the Supreme Court on the case, arguing that “the Palestinian families’ case was too weak to prevent the pending evictions.” This was in spite of the fact that the Sheikh Jarrah families have documents that prove Palestinian ownership of the land on which their homes are built.

One of the Supreme Court judges is a settler and the case against the Palestinian families is on behalf of Nahalat Shimon, a settler organisation which claims ownership over Sheikh Jarrah. The Israeli Occupation is also threatening to forcibly expel a further 24 families, numbering around 550 people. But now, following months of protests and mounting international pressure, Israel is looking to delay a hard-and-fast ruling until public attention can be sufficiently diverted. To gain time, the Supreme Court proposes that, for now, the residents remain in their homes as ‘protected residents’ while, however, being forced to pay rent to Nahalat Shimon. This proposal, on behalf of the settlers, would keep alive the ability to forcibly evict the residents at a later stage and they firmly reject that proposal. One resident, Mohammad El-Kurd affirmed on Twitter that “no decision or agreement has been reached.” How can Palestinians hope for justice from a discriminatory ‘legal‘ system, militarily-imposed beyond Israel’s internationally-recognised borders, that is itself a gross violation of international law?

In 1997, Dr Nurit Peled-Elhanan‘s 13-year-old daughter, Smadar, was killed by a Palestinian suicide bomber in Jerusalem. Nurit’s insistence that the tragedy was caused by the Israeli Occupation inspired her brother, Miko Peled, to re-examine the Zionist assumptions he had grown up with. The process transformed him into becoming an activist for human rights. Miko was born and brought up in a prominent Zionist family and his grandfather, Avraham Katsnelson, a signatory to Israel’s Declaration of Independence, fought as a general in the 1967 Six-Day War. For Miko Peled, the war was a “cynical campaign of territorial expansion”.

Nurit, an Israeli professor of language and education at Hebrew University, when invited to speak at the European Parliament in Strasbourg on International Women’s Day, 2010, told her listeners: “I believe you should have invited a Palestinian woman in my stead, because the women who suffer most from violence in my county are the Palestinian women.” She went on to dedicate her speech to: “Miriam R`aban and her husband, Kamal, from Beit Lahiya in the Gaza Strip, whose five small children were killed by Israeli soldiers while picking strawberries at the family’s strawberry field. No one will ever stand trial for this murder.”

As an Israeli woman, Nurit felt herself favoured and protected:

“I have never experienced the suffering Palestinian women undergo every day, every hour, I don’t know the kind of violence that turns a woman’s life into constant hell. This daily physical and mental torture of women who are deprived of their basic human rights and needs of privacy and dignity, women whose homes are broken into at any moment of day and night . . .”

It is this daily toll that our politicians and mainstream news media fail so utterly to recognise. Nevertheless, Nurit inevitably shares in the horror, as she explains:

“I am a victim of violence against women insofar as violence against children is actually violence against mothers. Palestinian, Iraqi, Afghan women are my sisters because we are all at the grip of the same unscrupulous criminals who call themselves leaders of the free enlightened world and in the name of this freedom and enlightenment rob us of our children.”

Speaking as an Israeli, Nurit declared:

“My natural and civil rights as a mother have been violated and are violated because I have to fear the day my son would reach his eighteenth birthday and be taken away from me to be the game tool of criminals such as Sharon, Bush, Blair and their clan of blood-thirsty, oil-thirsty, land-thirsty generals.”

And so it goes on . . . and on: Since 21 July – 4 August, inclusive, Israel has carried out 16 Gaza ceasefire violations, including five waste-laying incursions into the territory and air strikes. Five people (three of them minors) have been killed by Israeli forces, with 290 wounded. There were 44 Israeli Army home invasion raids in Palestinian towns and villages, many of them at dead of night.