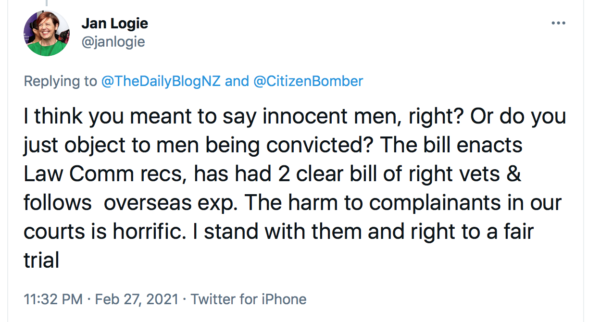 …seeing as Jan has taken the time to respond, it would be churlish not to reciprocate.

Let me start by stating very clearly I admire Jan and believe she is a very important voice inside Parliament. Her championing of those who have been failed by the justice system is exemplary and she has made a real difference inside politics.

I respect her and if my previous  description of her performance on Q+A, “as driven as a Qanon anti-vaxxer in her self righteousness” was a tad too far, then I apologise because I was saying it half in jest and half in deadly seriousness.

While I admire Jan, she is drunk on power with these law changes and it will erode legal protections while purposefully manipulating the legal process to get guilty convictions.

Sweet Jesus Christ people, if National or ACT had set out claiming ‘not enough people are being convicted of this crime, let’s cancel legal rights, remove any defence and then get conviction rates up’ there would be mass rioting, but because the goals of this are supposedly so lofty and unassailable, we can’t dare criticise the measures???

Let’s respond line by line to Jan’s defence of this process.

I think you meant to say innocent men, right? Or do you just object to men being convicted?

I’m going to skip the passive aggressive insinuation that my criticism means I support rapists because it’s irresponsible of a Politician to stoop to such insults, but I will come back to it at the end because it kinda perfectly sums up the real problem here with Jan.

Cooking up a result you want inside the bloody Law Commission doesn’t justify anything Jan and you know it!

has had 2 clear bill of rights vets

Do you mean the letter to Minister Little from a government lawyer in Crown Law as the BORA Vetting? That’s hardly the great rubber stamp you are claiming it is because the Criminal Procedure Bill of 2011 also got a “clear BORA vet”, which was nonsense because as Dr Kennedy Graham pointed out at the time…

There are cases, there is argumentation, that if we raise it beyond 3 months we are prejudicing the inherent right to a fair trial of certain people. The Minister might wish to dispute that, but that is the position we take. We take it in full responsibility for them and in full recognition of the thrust of the bill. It is sufficiently important for us to oppose this bill on that point alone, with great sorrow, because we know the amount of work that has gone into it, we know the complexity, and we know the well-intentioned effort. We will not compromise on that point, and I hope that that is respected.”

… and the Greens rightly stood firm for fair trials back then.

Not so much now. Jan continues…

…you know and I know there is huge criticism of you attempting to use overseas examples as proof positive this is best practise law here. Criticism is that you are comparing apples with oranges and that the examples don’t support your conclusions.

Also, there is no acknowledgement that the pre-recording aspect of this isn’t going to create an enormous traffic jam of cases, as one Defence lawyer recently explained to me…

The fact remains that experienced criminal lawyers and academics have expressed real concerns about how this will play in practice. They know that the real life practice of this will be a nightmare and will not, in fact, change the experience for the complainants at all. It will also be extremely expensive in terms of infrastructure costs for prerecording, longer trial/court time being required, more pretrial matters being required and potential ensuing appeals. Has she done a cost benefit analysis? Can we see it?

…so the claims that this desire to gerrymander the legal system to create more guilty convictions has been crafted by independent legal advice that has been Bill of Rights vetted and follows International best practise are incredibly hollow and disingenuous.

The harm to complainants in our courts is horrific. I stand with them and right to fair trial

I think you meant to say innocent men, right? Or do you just object to men being convicted?

…see, she means that. She sees any criticism against her wide eyed crusade to save all the victims as part of the enemy, and that’s the exact same saviour mentality that helped build Oranga Tamariki.

National waved dead brown baby after dead brown baby in our faces screaming, ‘something must be done’ and so Oranga Tamariki watered down legal rights of parents, they streamlined the process to up lift and they removed due process.

That is what the Greens are doing here with sexual assault court rules.

Purposely manipulating the process to ensure more guilty verdicts is not a fair trial no matter how lofty the intentions.

Why bother having a trial if the Greens have already found all accused guilty?

I can’t tell the difference between a Woke Lynch mob or a Sensible Sentencing Lynch mob these days.

Meanwhile the planet is burning.

It would be great if the Greens could put as much energy in climate change as they do building kangaroo courts.