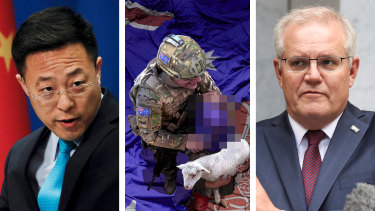 Nothing profound about this statement of fact – to they who read history and absorb what they read.

From Rome to Recent.   No Power, however great thou art, lasts forever. Empires Die.

In our time (you and me and other current readers); Dunkirk and Singapore saw the beginning of a rapid end to the British Empire.

And, in spite of the, New Napoleon’s delusional self-promotion as a decision make for the World, (Macron is worse than President Trump in my view), Nazi Germany, Dien Bien Phu in Vietnam and Algeria, spelt the end of France.

Like it or not, America too is on the way out.

Like it or not, China is on the way in.

Bomber appears to have made it clear that he thinks China are on a loser.

“Glug, glug, glug” – that’s the sound a sinking battleship makes, according to Paul Keating, who deployed the sound effect to devastating effect on Wednesday to underline his argument that the United States could not expect to dominate China in the South China Sea.

With Russia recently demonstrating  a  quantum leap ahead of American military, with their hypersonic missile,   potentially their preferred means of maintaining their position on the ladder, China has demonstrated to Australia  in recent weeks, that rather than the barrel of a gun, they prefer – trade as a weapon.

China v Australia is the current focus of this, ‘trade war’.

There are heaps of stuff out there which we can all devour, but the bottom line for all but the most addlepated, is that Australia are in deep crap.  From wine exports to crayfish: grain and minerals.

Put aside the bullshit and jellybeans about South China Sea expansion.

America has been serving up the same dish of bullshit – all my life: From the Korean War to Vietnam.  Throughout South America and the Middle East.  America has sought to expand its control over every corner of the globe.   Delivering democracy has been the clarion call – but those who read history and absorb what they read, recognise that the motive for creating chaos around the globe, was always – OIL and LOANS which subjugated devastated states to American banks.

OK Uncle Sam did not invade ANZAC.   But guess who got suckered into America’s war in Korea and then Vietnam and now Afghanistan – none of which America won – and leaving its allies with the adverse outcomes. i.e. war crimes in each and every one of these crusades to deliver democracy.

Don’t get side tracked over outrage about a caricature.  The issue is war crimes by Aussie SAS and in my view, whether NZ SAS activities should be revisited in light of these determinations of war crimes.

So, why all the paranoia about China coming in with a cheque book?

“But China will control out country?”

Who controls it now?    Who owns “our” banks?       And who is real piper calling the tune for NZ to take a position against China in the current dispute?

QUESTION FOR US ALL

Is it really a good idea to kick sand in the face of a country which we desperately need as an export destination to sustain our primary sector and as a source of students to sustain or education sector?

Feel free to kick the shit out of me in comments below.  But I’ve made up my mind which Emperor is best for NZ to pay respects.