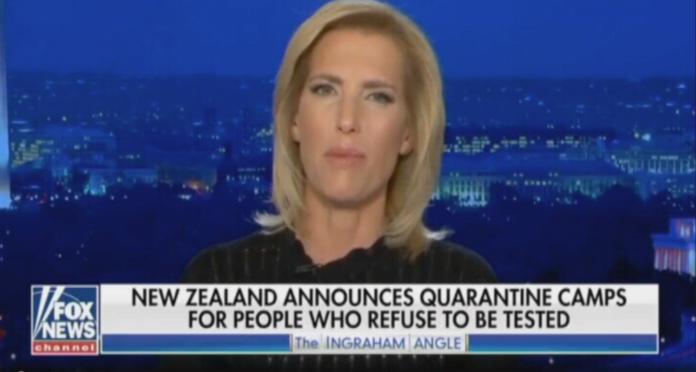 Why is New Zealand’s pandemic response (as of a few months ago, might I add) being blasted across Fox News in the US and presented as some sort of dystopian totalitarian FEMA internment camp ridden nightmare?

Because there’s an Election on. The people backing one of the candidates therein, or even merely ‘fellow travelling’ with his brand of politics overseas – know that Covid-19 isn’t going away, is an incredibly salient political issue; and that against their expectations, the escalating prevalency of both virus and frustration with their not taking it seriously … hasn’t actually been diminished by railing against lockdowns, masks, quarantines. Instead just causing ever-larger numbers of previously pliant people to ask the obvious question: “Why is this happening? Why don’t we have a good response?”

It would be simple enough to attempt to claim that that’s because it’s a “tricky virus” and that nowhere has it good – therefore absolving the responsibility of leaders who have done little, by suggesting that there was nothing to be done other than what was.

Except this is the Internet Age – and the truth of the matter, that some places have done drastically better than others, is now a matter of public record for anybody with a smartphone. Which is everybody.

So the question changes. It becomes “Why are some countries doing better than others? Why didn’t WE do some of those things?” And the answer … the answer is “we COULD have, but there would be such ‘costs’ associated with doing so – to your freedom, to your income and our economy, that ‘the cure would be worse than the disease'”.

I somehow doubt that this rings true to many – especially as there’s an ongoing demonstration that having an ‘open’ economy which is nevertheless also open to the transmission of the virus, doesn’t actually lead to sustained positive growth outcomes. And especially, further, as people either fall victim to the virus itself (and its lingering, still poorly understood impacts) or hear of others in their community or perhaps even their own family who have.

So if the evidence suggests that there WAS an alternative, if people can read with their own eyes the statistics and the stories coming out of little old New Zealand showing that what a mighty global superpower was unable to accomplish via bloviating bluster, a small chain of islands at the fringe of the world could do via pragmatic and principled methods … where does that leave the naysayer?

Frantically endeavouring to obscurate reality itself with those well-worn tools of the recent political experience: fake news and alternative facts. All in a bid to present one of the international success stories – in this case, New Zealand – as being somehow ‘undesirable’ to attempt to replicate at home.

By making it seem like we’re operating … well … that aforementioned “dystopian totalitarian FEMA internment camp ridden nightmare”. A sort of Second Coming of Stalinist Russia – with Gulags for dissidents plucked up off the street under the pretext of potentially having the virus.

And the constant implicit repetition that therefore, the ONLY WAY to actually have a competent response to Covid-19 is … by , well, that.

It’s literally Orwellian. Both in terms of presenting our country as Oceania amidst the South Seas with repression aplenty ; and also, more pointedly, in terms of making active utilization of media to change and distort reality so as to make domestic dissent, domestic questioning of governance in their own countries a non-starter. Encouraging and facilitating the adherent of the politics, policy, and politician in question (I hardly think we need to name names by this point) to mentally shut down their own critical faculties; and to spray-repeat these lines to anybody else in their immediate orbit who may themselves be experiencing some subconscious doubts.

So 4 and 5 star hotels housing people coming into the country for mandatory 14 day quarantine , or close contacts of confirmed cases in the community .. get turned into internment camps where not-actually-ill New Zealanders are snatched up into from off the street ; and remarks explaining the Kiwi policy dating from months ago are branded as a “terrifying new response”.

They’re trying DESPERATELY to distract from their own blustering incompetence – and therefore transforming via the magic of the camera lens and the biased media talking-head, a situation wherein we are all pretty much living normally here in Kiwiland, one of the most free societies on the planet right now ..

.. into , as I (or rather, as they) say – a dystopian hellscape of socialist / fascist (mis-)rule dotted with camps for dissidents under a tyrannical pseudo-monarch with an adoring cult of personality sufficient to drown out the apparently repressed domestic opposition and “moderate rebels” .

Funny thing, I didn’t think the Trump Administration and its supporters had any problem with putting people coming into their country into camps.

At the rate we are going, I would almost be semi-seriously expecting some form of international sanctions to be discussed in ‘retaliation’ for Jacinda “rigging the election” to produce her unprecedented electoral result or something.

Also, lest I be misinterpreted as suggesting this is somehow a uniquely American problem … it isn’t. We’ve already seen a British politician push all of this, and this morning we had some guy apparently affiliated with anti-PRC activism around Hong Kong and Taiwan start making similar claims.

There is a Buddhist maxim I am quite fond of :

That there are three things that cannot permanently remain hidden:

The Sun, The Moon, and The Truth.

Leaving aside the Murdoch publication by the name of one of these, and the Cameron Slater edited rag which bore the last of these three names and operated in imitation of the first one …

The international reputation of New Zealand as something other than a “Hellhole”, and somehow less democratic (or, for that matter, free) than the modern United States – shall surely remain similarly resplendent. So bright in fact, that these benighted morons desperately clinging to the rather literal fake news broadcast about this by Fox et co, cannot bear to look upon us.

No wonder they are letting their lurid imaginations ‘fill in the blanks’ instead.

Unfortunate, yet unsurprising, that we are being made spurious mis-use of as a political prodding-stick for other countries’ political brawling . Because we cannot be allowed to be presented as having succeeded where the ‘big boys’ have stumbled and failed.

New Zealand in the 1950s was declared prominently to be the little country who had lead the world in developing and implementing the humane state and humane society of the Post-War Economic Consensus era.