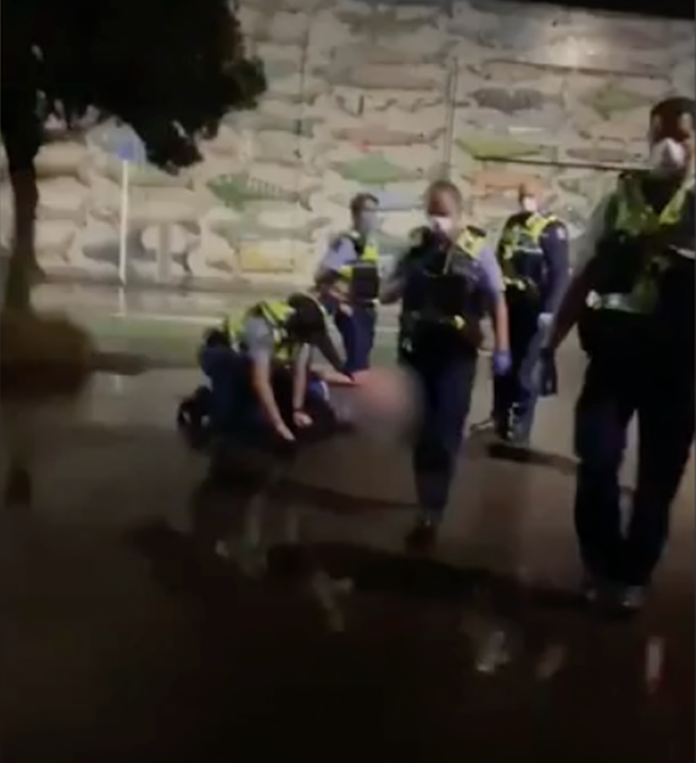 Former Green Party candidate and climate change activist Luke Wijohn has filmed police threatening him with arrest after he came across a group of officers pinning a man to the ground in Wellington.

Wijohn was heading to pick up his girlfriend from work at the supermarket on Friday night when he heard a man scream in pain, he said on Twitter Saturday morning.

The first video Wijohn posted showed a group of seven policemen, two of them pinning a man face down on the ground.

What can we say about this?

There are many good things to say about this

We are liveing in extraordinary times.

It is good that Wijohn stood his ground.

It is good that Wijohn was not arrested.

It was good that Wijohn was observing the level 4 protocols.

It was good that the police listened to Wijohn’s reasoning. (It all could have ended very differently.)

It is good that we still live in a democracy, where the state forces are not prepared to step over the line to abuse their new emergency powers, given to them under this health emergency.

The police have a difficult and often dangerous job to do. A job that often results in confrontations that lead to heightened emotions and feelings of aggression. Despite the temptations to give into to these emotions, professionalism in dealing with the public by the police must be maintained.

We all need to be mindful, including the police, that we are living in extraordinary times. And that there is a very real fear among some members of the public that the state may tip into over-reach in trying to contain the virus.

My thought is that Wijohn, through his lawyers. needs to offer his footage to the police for training purposes. To see, what could be improved here?

It is good that we live in an age that gives us all the technology to capture things that once would have been hidden from the general public.

It is good that in our democracy, recording the police going about their lawful duties is an absolute right for every citizen,

It is good that we have many decent police officers who are not prepared to step over their bouandaries.