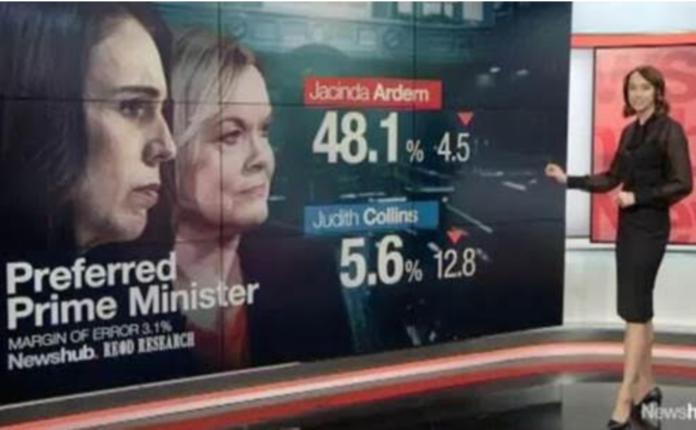 TV3’s PRESENTATION of the poll results delivered to them by Reid Research Ltd tells us a lot. The most important message to draw from the way it handled this “news” is how rapidly propaganda is replacing journalism in the mainstream news media. The data supplied by the pollsters confirms that there has been no major shift in political opinion since the general election of 17 October 2020. Given the decisiveness of the 2020 result, and the want of any developments of sufficient magnitude to cause Labour voters to change their minds, this stand-steady result should have come as no surprise. “Voters still happy with Jacinda” is not, however, a headline likely to stop viewers in their tracks. “Support for Judith Collins plummets”, on the other hand, just might.

Had TV3 been polling regularly since the election, with five or six sets of results accurately tracking the public’s feelings about the Leader of the Opposition; and had the latest results confirmed or confounded a rising or falling trendline; then such a headline might have been justified. But, TV3 has not been polling regularly. Indeed, the last poll it conducted was back in October 2020. Yes, that’s right, in the middle of last year’s election campaign. Naturally, the Leader of the Opposition was then polling around 18 percent. More than six months after losing the election by an historic margin, she is polling around 6 percent as New Zealand’s preferred prime minister. Well, gosh! What a surprise! Clearly, Collins’ days are numbered.

But wait, there’s more. Tova O’Brien, TV3’s political editor, would have known that Collins’ numbers were bound to drop back over a period of six months. The temptation would have been strong, therefore, to attach her predictably “plummeting” numbers to her recent campaign to elicit a coherent government response to the He Puapua Report, and whether or not it is guiding government policy.

Any failure to reproduce the extraordinary 17 percentage point surge in National’s numbers generated by Collins’ predecessor’s, Don Brash’s, in/famous “Orewa Speech”, would allow O’Brien and her colleagues to paint Collins’ He Puapua campaign as a flop. Even better, it would allow them to present the poll data as proof that New Zealanders have grown up and grown out of racial politics.

Just to be sure, however, O’Brien inserted a couple of questions to drive that message home. Were the Government’s policies separatist? she had Reid Research ask. And: Were the Opposition’s criticisms divisive? Entirely unsurprisingly, between 40 percent and half of respondents thought the government wasn’t being separatist, and that the Opposition was being divisive. For good measure, the viewers were further informed that roughly a quarter of National voters thought their party was being divisive and about the same number of Labour voters saw their party as separatist. All of which added up to? Almost nothing at all that was helpful.

Of much more use to TV3’s viewers would have been a carefully worded series of questions aimed at discovering just how much people knew about the He Puapua Report, and seeking their reaction to some of its recommendations. Ah, yes, but that would have cost TV3 an arm and a leg. It would also, almost certainly, have shown that most Kiwis know next-to-nothing about He Puapua, or its recommendations; and, when appraised of some of the report’s more radical proposals, their responses tend to be less than favourable.

Of course, the responsibility for the public’s general ignorance about He Puapua, and the general direction of travel favoured by its authors, rests squarely with the likes of Ms O’Brien. Realistically-speaking, however, expecting the mainstream media to acknowledge its own deficiencies as the supposed protector and facilitator of democratic discussion and debate would be foolish. The mainstream media no longer sees its role in such terms. Its responsibility, now, is to impart the truth – as officially defined – to the population, while doing everything within its power to ensure that this official version of reality is not effectively challenged by anyone – up to and including the Leader of the Opposition.

This is how it works now. If a potentially damaging report like He Puapua makes it into the public arena, do not under any circumstances attempt to inform the public accurately and dispassionately about its contents. Instead, brand any publicly voiced misgivings about the report’s recommendations as “racist”. Give maximum coverage to accusations and recriminations arising from politicians’ responses to the report, and highlight the alleged divisiveness of their attempts to question or challenge its findings. Then, commission a poll, the entirely predictable results of which can be used to discredit the report’s critics: most particularly the leader of the political party most heavily invested in challenging its officially sanctioned version of reality.

It’s a game played out every day in Moscow and Beijing. The only serious distinction between the players there, and the players here, being that ‘there’ they know the name of the game is “Propaganda”; while ‘here’ they still think it’s called “Journalism”.