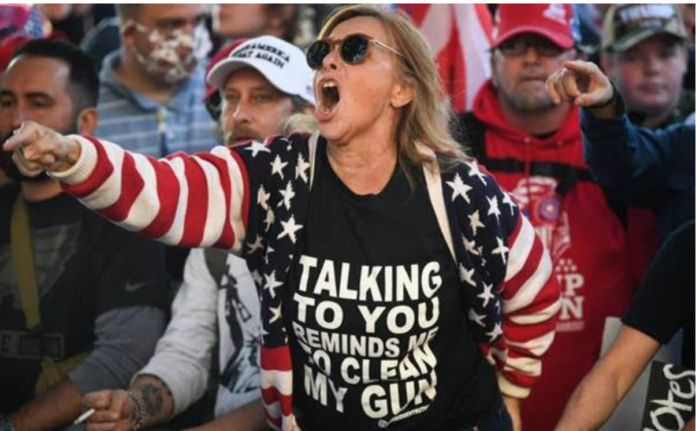 THE NATIONAL PARTY is to be pitied. Those within its ranks whose personal political philosophies match the zeitgeist are inadequate to the task of expressing it. While the handful of genuinely talented National politicians have convinced themselves that power can only be reclaimed by competing fiercely with Labour for the right to implement the same policies. This anything-she-can-do-we-can-do-better strategy is unlikely to succeed. If New Zealanders are happy with a cautious liberal party, committed to incremental reform, then why would they exchange Jacinda Ardern for Judith Collins, or Chris Bishop, for that matter?

If National wishes to remove Labour from office it must be willing to embrace the anger and vengefulness of all those who have not found a physical and/or spiritual place to call ‘home’ in 2020s New Zealand. This will require the party to cease pretending that the policies of the 1980s and 90s can somehow be rehabilitated and set to work with the slightest prospect of success. They can’t. Like the rest of the world, New Zealand is fast becoming ripe for retributive populism. Not so much “New Zealand the way YOU want it” as “New Zealand the way THEY deserve it”.

This is the populism of Victor Orban’s Fidenz Party, Poland’s Law & Justice Party and, less successfully, of Donald Trump’s Republican Party. It is founded on the principle that the past was better than the present: and that unless there is a strong and unapologetic reassertion of the values and policies that dignified the past, then the nation’s steady decline will persist into the future. The truth or otherwise of this core populist assertion is irrelevant since the voters most likely to respond positively to it are aggressively unwilling to entertain anything in the way of counter-arguments. Evidence is for snobs. Real people are guided by their emotions.

All over the Western World there has been an explosion of what the German dissident philosopher, Rudolf Bahro, called “surplus consciousness”. In essence, advanced industrial societies have a tendency to impart more knowledge than they can usefully exploit. Increasingly, those who have passed through all the stages of education: primary, secondary and tertiary; are left knowing much more than they can sell.

In the former socialist states of Eastern Europe, this surplus consciousness manifested itself in movements determined to open up political, social and economic space for the highly educated. In late-capitalist societies, the possessors of surplus consciousness are used to manage and police those poorly educated citizens for whom the globalised economy is, increasingly, reserving only intermittent and poorly-paid employment. According to sociologist Beverly Burris, the role of this new Professional Managerial Class (PMC) is “objectively antagonistic to the working-class”, and that its “most essential and general function is … the reproduction of capitalist culture and capitalist class relations.”

In the past, political parties dedicated to the smooth functioning of the capitalist system would have looked upon the emerging PMC as an important ally. The unceasing expansion of the PMC in both the public and private sectors of the economy, however, has given right-wing political thinkers cause to question the long-term political trajectory of the PMC. In the process of reproducing capitalist culture and class relations, these highly-educated servants of the system are also radically changing it. Capitalism, itself, is fast developing its own surplus consciousness. Far from integrating workers ever more closely into the capitalist system, the changes demanded by the PMC are alienating them from it.

A globalised capitalist system may derive no benefit from racist, sexist and anti-LGBTQI prejudice: indeed these thought systems constitute a barrier to its smooth functioning. At the level of the nation sate, however, the rational altruism of the PMC runs counter to just about every single one of the social traditions that have shaped its history.

New Zealand, for instance, is a nation state founded upon the deliberate subjugation and dispossession of the indigenous Maori. Racism is in its bones. New Zealand’s emphatically British cultural traditions constitute the bedrock of its Pakeha citizens’ identity. The country’s deeply-ingrained settler consciousness: sternly individualistic; aggressively heterosexual;  proudly egalitarian; is not even remotely sympathetic to the politics of identity out of which a new multicultural “Aotearoa” is being fashioned. Well below the official radar, an ethno-nationalist backlash is, almost certainly, gathering force.

Labour’s current grip on the electoral loyalty of a plurality of the Pakeha working-class, as well as comfortable majorities of the Brown working-class and New Zealand’s own PMC, gives the party a huge advantage over National. Its ideological commitment to feminism, anti-racism and gender equality is perfectly congruent with its broader role as the principal facilitator of globalised capitalism within the New Zealand political system. If National is entertaining hopes of supplanting Labour in that role, then “tell them they’re dreaming!”

The National Party’s only real hope of shattering the fast-setting concrete of Labour’s electoral hegemony is to take to it with the jackhammer of right-wing populism. What Labour and its media allies in the PMC will instantly decry as racism, sexism, homophobia, but which National will characterise as the bedrock values upon which New Zealand was founded, will announce to all those who feel put-upon by the PMC and its “woke” avant-gardethat the National Party has their back.

To make this realignment work, National politicians will have to surrender their disdain for the nation’s underachievers. Like Donald Trump, they are going to have to learn to “love the poorly educated”. They are also going to have to learn how to disengage from rational discussion with “mainstream” journalists. Aggressive repetition of a few key slogans – and a few key falsehoods – is all that’s required of right-wing populist politicians. And if they can master the art of representing leading journalists as purveyors of “fake news” as well as dangerously biased “enemies of the people”, then so much the better.

The other habit National will have to lose is its habit of mouthing neoliberal platitudes. If the workers want their jobs protected by tariffs, then tariffs they must have. If the underclass needs bigger benefits, then implement the WEAG Report in full. If the housing crisis requires an all-out effort by the state to build more homes, then resurrect the Ministry of Works and start building them. If red-blooded Kiwi blokes are worried that climate change will require them to give up their SUVs and utes, then proclaim the whole global warming thing a hoax. Tell conservative Kiwis what Dick Cheney told conservative Americans: that their way of life is “non-negotiable”.

It won’t be pretty: right-wing populism seldom is. It won’t bring New Zealanders together: but that’s not the point. To win back power, National must make itself the champion of every person who feels the old certainties crumbling beneath their feet. Every Baby Boomer who feels too old to change. Every Millennial who despairs of ever owning their own home. Every Maori sick of being looked down on because she can’t speak Te Reo, and who just wants a fair crack at the sort of life the Pakehas live for herself and her kids. Every factory worker resentful of the salaries his union pays middle-class kids fresh out of university to tell him he needs to work on his “white male privilege”.

The zeitgeist of the 2020s is rage: suppressed, inchoate, stomach-churning and tongue-tying rage at the loss of, well, you name it. And that’s the trick, National, to name it. But, before you try, you need to get mad. Really, really mad.