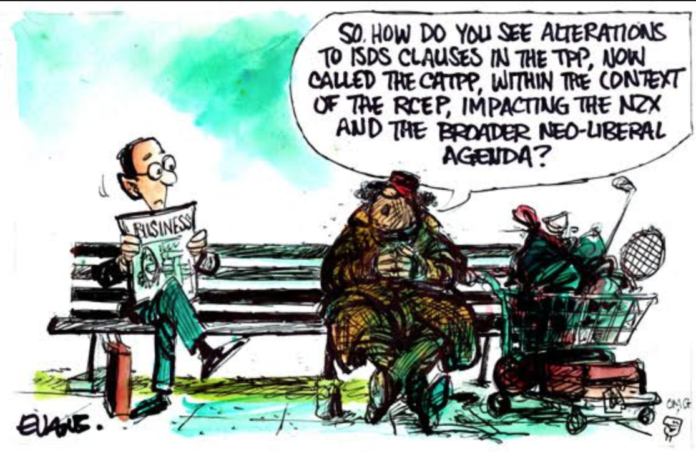 The Regional Comprehensive Economic Partnership (RCEP) that was signed virtually yesterday is a wake up call for the cheerleaders of hyperglobalisation: countries and their peoples have become wary and weary of these mega-free trade deals , …

“The Regional Comprehensive Economic Partnership (RCEP) that was signed virtually yesterday is a wake up call for the cheerleaders of hyperglobalisation: countries and their peoples have become wary and weary of these mega-free trade deals ”, says University of Auckland law professor Jane Kelsey, who closely followed the negotiations and attended many negotiating rounds over the past eight years.

What was originally slated as China’s antidote to the Trans-Pacific Partnership Agreement (TPPA) leaves out some of the most controversial rules.

There is no chapter on state-owned enterprises or government procurement, no right for foreign investors to enforce special rights through investor-state dispute settlement (ISDS), some intellectual property rights for Big Pharma are absent or diluted, the electronic commerce chapter left out some rules and is not enforceable.

Moreover, RCEP delivers virtually nothing in traditional market access terms among 15 countries that have a vast web of similar agreements among themselves.

“The big deal, including for New Zealand, was the inclusion of India”, says Professor Kelsey.

“But India walked away last year because the price was just too high. The economy and workforce would have been swamped by Chinese imports and Australian and New Zealand market access demands would have devastated India’s 100 million dairy farmers.”.

Professor Kelsey notes that the usually ebullient Ministry of Foreign Affairs and Trade (MFAT) is even downplaying the deal, admitting that it failed to achieve its objectives.

“It’s time for New Zealand to revisit the failed hyperglobalisation model of the past four decades, especially after Covid-19 has exposed our vulnerability to deeply integrated supply chains we can’t control and ‘services exports’ that depend on international travel.”

“Even the Labour’s government’s Trade for All Advisory Board called for a rethink of the current approach” Professor Kelsey observed.

“Hopefully Minister Mahuta will bring a fresh eye to these challenges and help move New Zealand to a progressive trade agenda fit for the challenges of the 21st century.”