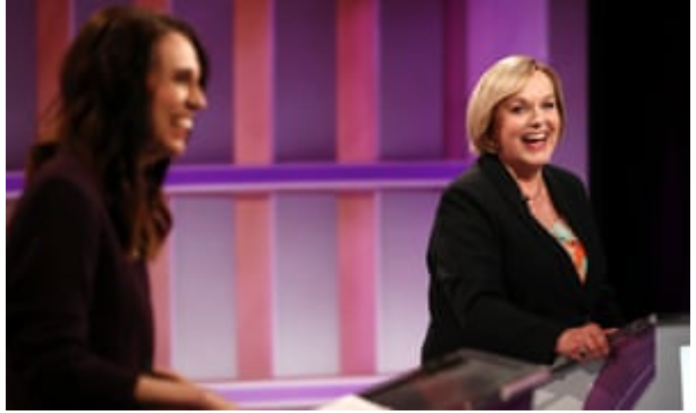 Last night I dreamed I had a nightmare. It was a Punch and Judy show on TVNZ. In one corner was Punch in the other Judy, except it was Judy who was punching Jacinda. Out the back pulling the strings was QAnon, recently outed as a Wall Street banker. Judy wore the death mask of a dying world pumping gas into the atmosphere. Jacinda, was dolled up as a marionette entertaining the mob, throwing kisses and licking her bruises. Out the front was the lolling crowd, lapping up the theatre of the absurd a day out from the next circus visiting town. It all seemed too much and I woke up.

On the early show on RNZ a Raglan teacher who had not voted once in his 41 years was allowing his 13-15 old students to use his vote. Most voted Labour followed by the Greens. No mention of Covid conspiracies, or marvel comic characters. Even the born-again Maori Party failed to show up.

I jumped out of bed and headed for the computer brain cells on fire. Staggering slightly as cannabidiol was still knocking me out. As I fell on the keyboard my head spinning, I imagined what Karl Marx would have thought of all this. He was a fan of Goethe and Shakespeare and late nights at the pub, but would he understand the Theatre of the Absurd.

Of course he would. Capitalism is an absurdity. Behind the proscenium arch lie the secrets of growth and degrowth. Capitalism is a parasite that can change color. A virus that attacks every organ and leaves you wasted. Healthy humans are rational, material beings. We know we have to work to live. We produce value out of our labour and consume only what we need. We do not hunt and gather for trophies but for food and shelter. In fact we conserve our labour energy by using tools to increase its productivity.

But the capitalist measures value by labour time and he makes sure we work longer than we need to live. Our wage is just enough to allow us to live to work long enough to create surplus value or profits. Energy flows into reworking nature not just to reproduce our labour but to create the profits of the employers. Now that is absurd because it blows back.

So, growth is essentially our reproduction as a species living in harmony with nature or else nature blows back and destroys us. That synergy with nature determines growth. Along comes capitalism and diverts the metabolism of the energy flow into the pockets of parasites, the landgrabbers who become Messrs. Moneybags or in today’s parlance Mr QAnon.

Growth is now measured by the amount of surplus labour extracted from natures bounty into the belly of the monster. This creates an edifice of wealth stolen from nature, a deficit which ultimately bites back as degrowth. So capitalist growth leads to compulsory degrowth?

This degrowth is called a crisis. Crises are breakdowns in production of value. Profits fall and investment in production ceases. A crisis is anything that stops production – recessions, depressions, pandemics, wars, and now the king hit – climate crash.  Clearly capitalism by its nature is a theatre of absurdity as the destruction of nature is the price of making a buck.

Judy’s ghostly death mask is a portent of the collapse of capitalist ‘civilisation’. Jacinda’s dangling dance is humanity in denial of its finitude and living in la la land. Growth as capitalist growth is impossible without total destruction. In fact, growth is the name of destruction. GDP is a fiction. It measures the price of everything but the value of nothing.

What are $20,000 dollar Covid flights to the Northern Territory; the shipping of poison gas to Bashar Assad; the Rocket Lab shooting up into the atmosphere the technology of space wars; the burning of the real Amazon so that the other Amazon can drone its high tech monopoly into our minds; what is Domestic violence that creates paid employment for cops, lawyers and university professors, but the Grotesque Destructive Parody of the production of useful value?

We need to destroy the Theatre of the Absurd and create the Theatre of the Real. We need degrowth not by means of depression, pandemic and wars, but by eliminating the extraction of surplus value that destroys nature and ourselves.

Maybe the kids at Raglan Area school, kids everywhere, fluent in Maori, empathy and justice, can arouse the woke sleepwalkers of the Theater of the Absurd, expose the real workings of the puppet masters, and replace them with the Theatre of the Real.  Humans working to live within the bounds of nature, saving millions of species including our own from extinction.

I want to dream about that.