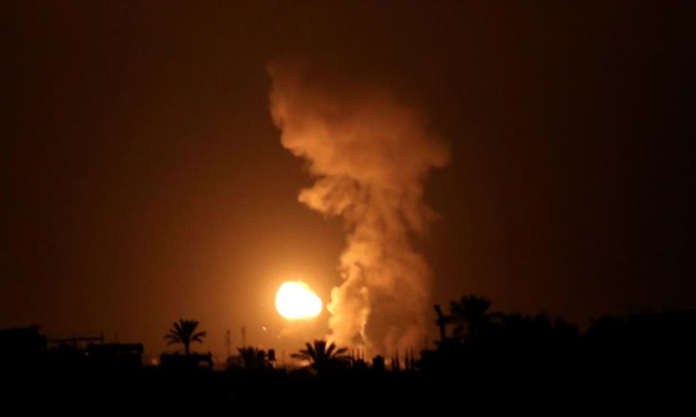 The same could  be said of mainsteam media’s coverage of the  bombing of Gaza.

Israel has shut down Gaza’s access to fuel needed for electricity  ,  stopped Gazans from fishing.

Medical facilities in Gaza were unable to cope before COVID-19. Medical supplies are less than minimal. Public water is unsafe.

The legal definition of genocide by the way, includes having the ‘intent’ to destroy a people.

What is the intent of the Israeli regime?

For that matter, why do they do it?

The Israeli regime will say that they are just ‘responding’ to incendiary balloons from Gaza. Just responding, ie, it’s the Palestinians’ fault, serves them right.

This is the line accepted unquestioningly by mainstream media.

No media would dare suggest that maybe the incendiary kites, which have caused no deaths, are a ‘response ‘ , say, to Israel’s barbaric siege.

NO! NO! NO!  Palestinians are not allowed to ‘respond’.

The bombing goes on and on. Why doesn’t it stop? Ramzy Baroud of Palestine Chronicle suggests that as Netanyahu and Gantz are in a political struggle, neither dares risk being branded as ‘weak’ by calling for a halt to the bombing.

And why does the outside world not object?

Quoting from the jewishvoiceforpeace site:

(March 30, 2020) — Over 30,000 people from around the world gathered online through Zoom (500) and Facebook (30,000 views) for a virtual rally to End the Blockade on Gaza. Palestinian speakers across three continents, from the occupied West Bank and Gaza, in the U.K. and the U.S., described conditions on the ground right now in Gaza, as the coronavirus continues to spread in one of the most vulnerable places on earth.

That was 5 months ago. Yet the bombing continues.

As far as mainstream mdia is concerned , this large rally ‘didn’t happen’.

In May of this year, more than 250 global artists and writers , including Naomi Klein and  Ken Loach, appealed to Israel to stop the “siege” of Gaza, saying the coronavirus epidemic could have a devastating effect in “the world’s largest open-air prison”.

“Long before the global outbreak of COVID-19 threatened to overwhelm the already devastated healthcare system in Gaza, the UN had predicted the blockaded coastal strip would be unlivable by 2020,” the online letter said.

A couple of years ago, I wrote  for the Green Party magazine, the following review of the book , NO WAY BUT THIS, In Search of  Paul Robeson  by Jeff Sparrow.

Jeff Sparrow describes working in a trade union bookshop in Melbourne where book collections belonging to  decreased unionists, peace actvists, an  “aging generation of progressives”, “stalwarts of the Old Left”, ended up. “They’d read so very, very widely”. “There were always, always, books about Paul Robeson. “

An avid reader himself, Sparrow became fascinated by Robeson , the son of a slave who became a superstar singer and actor, advocate for the oppressed, foe of racism and fascism , only to be destroyed,  ‘disappeared’, from public life.

Sparrow knew that the African-American singer had come  to Sydney, when the Opera House was under construction, to sing  to the workers  his most famous song, Old Man River.

Sparrow decided to travel , to learn more about Robeson’s background, ie, the politics and social structures that influenced him, as well as  the poets and other writers of his time. Sparrow’s investigations took him  to North Carolina, to Philadephia , to Harlem, to  England , to Wales , to Spain and to Russia.

Robeson became active in Welsh union politics after hearing unemployed poverty-stricken miners singing in beautiful harmony. Robeson realised that music meant as much to the miners as it did to African-Americans.

But it was the Spanish Civil War that had the strongest influence on Robeson. He explained, “ The artist must take sides. He must choose to fight for freedom or slavery.”  Trade unionists, as well as writers including WH Auden and George Orwell , feared that fascism would spread further if not  stopped in Spain.

Paul Robeson  maintained that  for the rest of his life, Spain had  altered him.

I strongly recommend No Way But This. It is very readable, hard to put down actually. And it raises questions. Why is it that the suffering of the Spanish raised so much passion at the time, that civilians volunteered to go to Spain?  Why were people  horror-stricken  at the of bombing of civilians, barbarity illustrated by Picasso’s Guernica?  Yet today high tech bombing of civilians is of little concern. What has happened to humanity?

The questions I asked at the end of my book review,  still haunt me.

The Spanish Civil War wasn’t that long ago historically. Have present generations  become indifferent to warfare and  bombing? Have we lost our sense of humanity? That’s a frightening thought.

Please let’s, all of us, demand that our  religious, academic, media and political elite join us  and refuse to look the other way. Every bomb dropping on Gaza is falling  on men, women and children….grandmothers, little brothers, baby sisters.

If we have any sense of humanity left, we need to mentally  paraphase Arundhati Roy’s comment re the war on  Iraq.

We need to believe that “Every Gazan child is our child.”