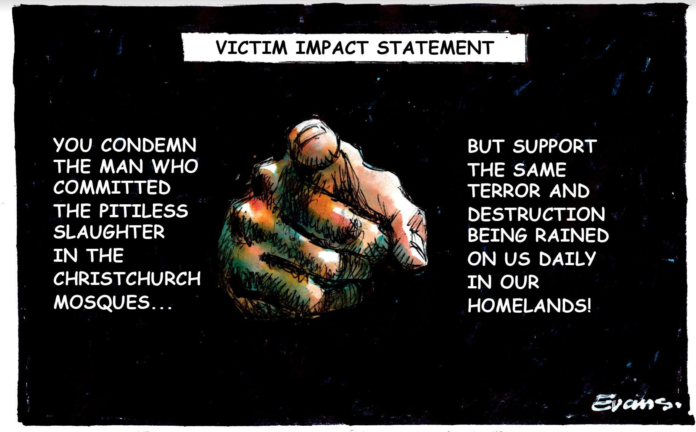 The curtain has fallen on a judicial process that has sentenced a characterless creature to life without parole, and yet still the ghost of Voltaire’s words hang over the stage; “It is forbidden to kill, therefore all murderers are punished, unless they kill in large numbers and to the sound of trumpets.”

Satisfied that we have delivered justice to the Christchurch Mosque victims and loudly proclaiming “we are one” with them, nobody seems to consider that we may have played a part in setting the stage for this atrocity.

Few victims of the pitiless Christchurch Mosque massacres would have been in New Zealand that day had they not fled here from even more terrible destruction, being rained on their homelands by a world superpower, with whom we are closely allied.

New Zealand has been involved in many wars in its short history, very few of which were ever justified by the reasons we were given at the time, but which were actually fought either in the interests of British imperialism then, or US imperialism now.

And many of our new Muslim refugee brothers and sisters, who now call New Zealand home, are here as a direct consequence of it.

When the pilot of the C-130H Hercules that carried its craven cargo to and from the Christchurch court, filled in the plane’s logbook, he could have leafed back and seen details of earlier flights which, back then, carried NZ troops to the varied homelands of the Muslim diaspora.

They say Covid19 offers us a good opportunity to reset our economy on a course to an even better future, and so too could the tragedy of the Mosque massacres, if we cared to consider what was happening behind the scenes in the prelude, and fix it.

With that in mind and considering that which goes to the heart of this matter, our understanding of world geo-political affairs, it’s clear we have been persistently told, in the words of the late Justice Mahon; “a litany of lies!”

From war with the Maori, to the Boer war, WW1, to Fiji and Samoa, to the Korean war, Malaya, Vietnam, Iraq, Afghanistan and Syria, to our support for Israel’s brutal suppression of the Palestinians, to the so-called “war on terror, and now Venezuela, China and Russia, our attitudes have been meticulously moulded by a particular view presented to us by the media.

Where else has our understanding come from?

World respected peace advocate Professor Noam Chomsky, author of “Manufacturing Consent,” which details how the media invents the many “truths” we hold dear, says we live in a society in which freedom of speech is indeed sacrosanct but, says Chomsky, only within certain clearly defined parameters, outside of which we must not look.

And so we might have continued to travel, smugly self-assured in the belief that our society and culture is the most righteous and that but for a variety of  evil foreign forces, which come and go depending on the situation, everyone could live as we do.

The fact is that’s a fairy tale!

A fairy tale that was exposed with the arrival of the Internet which suddenly laid bare the myriad falsehoods that have, to date, underpinned our understanding of the world and kept us, especially the poorest among us, cruelly subjugated.

And, based on meticulously gathered evidence, it’s clear the Mosque murderer was also influenced by the media’s incessant anti-Muslim propaganda, not to mention both the Australian and New Zealand governments’ support for it, implicit in their military involvement

Where else were his views formed from?

None of which should in any way be interpreted as a plea on behalf of a justly convicted murderer, but rather as an attempt to point out that in times of heightened tensions everything rises, including that of men’s most base behaviours.

And none of that will change until we rid ourselves of any alliance with a state whose primary objective is waging war itself, for the purpose of plundering another nation’s assets to secure its global hegemony – proof positive that Voltaire was right.

As long as our Government is guided by a brand of political pragmatism, measured only by the test of what best serves our economic interest, and not by one based on the principle that recognizes we are all one on this little planet, then how can we ever really consider ourselves kind?

But nothing will change as long as our media, owned, either wholly or in part, by those who profit from war, which President Eisenhower called “The Military Industrial Complex,” has anything to do with it – unless we fight.