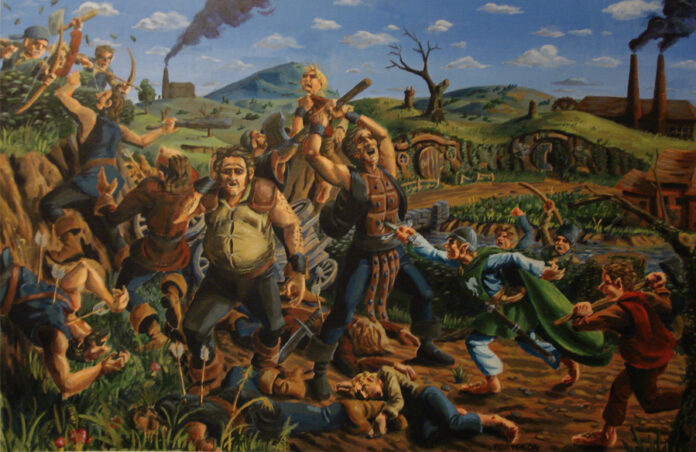 The ‘Scouring of the Shire’ from Lord of the Rings

New Zealanders overseas have noticed a rise in hostility to those having to make the decision to return home, a departure from the kindness the country has been encouraged to show.

Now with daily cases being caught in isolation facilities and high numbers of New Zealanders returning home, those returning feel less welcome than ever.

Some people online have called for flights from global hotspots to be scrapped completely, to limit the numbers of those returning home, or that they should pay the entire quarantine cost.

Clint Heine, who has been in the UK for more than a decade, said he has noticed more anti-returnee sentiment the past couple of weeks.

“From certain elements on social media and the press, no, it’s not so kind.”

I always felt that Peter Jackson left out the best part of our taxpayer funded Aryan fantasy documentary ‘Lord Of The Rings’ when he cut the ‘Scouring of the Shire’ where Frodo returns home to find the very evil he had fought to protect the Shire from had already settled in.

In short, homecomings can be complicated.

New Zealand never really ever mentions its diaspora. Jacinda proudly refers to us as the team of 5 million, but there’s another million NZers who fled Godsown whom we barely ever mention.

That’s 20% of us we pretend not to notice not being here. Empty chairs at Christmas, a curt nod and a wink to big ‘OEs’ that never ended.

And why wouldn’t you escape the clique clutch of NuZilinders if you had the talent to run?

The ‘Kiwi way of life’ is a low imagination horizon anti intellectualism based on exploitation of confiscated indigenous resources where ignorance & malice is celebrated by the rural volk while middle class attention is engulfed between school rankings, property speculation, & self-righteously retweeting Spinoff stories on social media.

Who the fuck wouldn’t want to escape such twee small mindedness when the cosmopolitan curvature of the globe is so brazenly flirting?

And the wheat separates from the chaff as it has always been.

As TDB has been pointing out endlessly, a new emergent trend from the Covid world is the sudden home coming for the NZ diaspora who see the intense cosmopolitan masses as fuel for plague, not globalised chic.

Returning to the land of the wrong white crowd, to clamber aboard the lifeboat of the gauche, to resettle alongside the unsophisticated and the the socially awkward who resent you for leaving Godsown in the first place will be a cultural friction waiting to erupt.

Returning Kiwis will resent any restrictions making their homecoming more difficult while locals will quickly start blaming the lack of affordable homes and the returning gridlock of infrastructure on these returning Kiwis who turned their backs on us to make their fortunes but who came running home when it wasn’t safe.

The only saving grace from the cultural frictions we are about to plunge into is Māori culture of whanau and Manaakitanga. Their cultural leadership is the only thing that will bridge this looming divide.