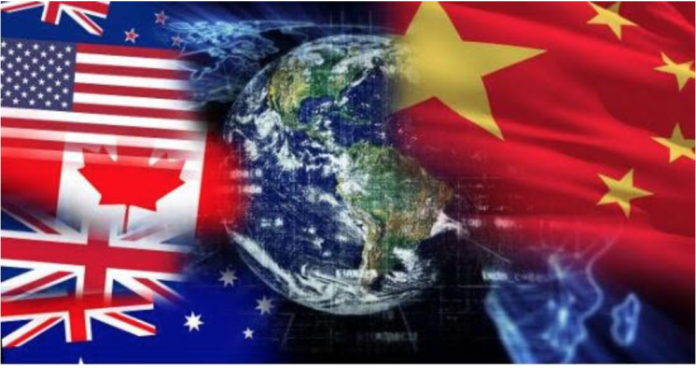 Is this really the sort of neo-imperialist company New Zealand wants to be seen keeping?

WE HAD TO be there, I suppose, at Tuesday’s Five Eyes videoconference. Had we not been there people would have talked: serious people; dangerous people. Even so, these Five Eyes get-togethers are fast becoming a “thing” – diplomatically and militarily. It’s a worry. Is this really where New Zealand wants to be? Hemmed in by the other Anglo-Saxon powers: the United States and what used to be called the “White Dominions” of the British Empire? With colonialist and imperialist statues tumbling all around the world, is this really the company we want to be seen keeping?

What does the rest of the world make of all this? Of these first, tentative, steps towards a fully-fledged military alliance of what Winston Churchill liked to call “The English Speaking Peoples”? (ESPs) What are they thinking in Moscow? In Brussels? In Beijing?

I suspect they’re all asking themselves: “Are these guys serious?” What year do they think they’re living in – 1900?”

Certainly, since the election of Donald Trump, and then Boris Johnson, it has become increasingly difficult to read the intentions of the two leading Five Eyes powers. In their worst moments, Russian, European and Chinese analysts must look at the steadily widening gap between the USA, the UK, and the multilateral institutions of the post-war world they played such a vital role in establishing – and shudder. You wouldn’t need to be all that paranoid to interpret it as proof of the American and British establishments’ determination to shake off the self-imposed restraints of multilateralism and strike out in a new (or, should that be an old?) direction.

NATO and the European Union no longer seem to engage the ESPs in the way they used to. Trump keeps denouncing his NATO partners for what he sees as their inadequate fiscal contributions to the common defence of Europe. Moscow can hardly have failed to draw the obvious conclusion: that a Trump-led America is not about to incinerate the world for Latvia, Estonia or Lithuania. It will be less certain about Poland and the Ukraine – but not that much less certain. The Russian Federation’s diplomats in the USA must be aware that the American people’s weariness with being the world’s “indispensable nation” is every bit as great as Trump’s.

After carrying the world on its shoulders for nearly 80 years, is the American Atlas about to  shrug?

But, even in Trump’s Washington there is still enough wisdom to know that some allies are better than none at all. And what better allies could the USA have than the four other countries who share a common language, a common culture and, at least as far as the past century is concerned, a common history? Since 1812, none of the Five Eyes partners have ever gone to war with each other. In two world wars, and Korea, they fought alongside one another. Which is why, as a diplomatic and military instrument, the emerging Five Eyes alliance strikes the neo-imperialists as having every bit as much to recommend it as a squabbling flock of free-riding Europeans.

For the Brexiting British, too, the emerging Five Eyes Alliance has a lot going for it. Indeed, it would represent the culmination of a grandiose global project first mooted by the likes of Cecil Rhodes and his fellow imperialists at the turn of the nineteenth century. Though the British Empire then bestrode the world, the more astute among its ruling class recognised the enormous economic power then building in the United States and understood the importance of keeping Great Britain alongside – rather than athwart – America’s ineluctable rise to great power status. While the German Kaiser dreamed of an Anglo-German alliance, the people who mattered in Britain always saw the United States as the more natural fit for a global duopoly.

Certainly, there is an unmistakable echo of that long-ago imperialist age in the communique released by the Five Eyes Defence Minister’s on 24 June:

The defence ministers from the Five Eyes nations (Australia, Canada, New Zealand, the United Kingdom and the United States) met via videoconference on 23 June.

Ministers reaffirmed their commitment to advance defence and security cooperation on matters of common interest to support and defend a stable, rules-based, global order that is increasingly being challenged.

Ministers recognised the role of regional partners and institutions in shaping globally and across the Indo-Pacific a stable and secure, economically resilient community, where the sovereign rights of all states are respected.

Ministers committed to meet regularly as part of efforts to address existing and emerging security challenges, and to advance their shared values of democracy, freedom and respect for human rights.

The degree of embarrassment experienced by Canadian and New Zealand diplomats (if not by this country’s Minister of Defence, Ron Mark) when confronted with this sort of world-ordering rhetoric is easily imagined. After all, the governments of both countries were equally unwilling to join the USA, the UK and Australia in challenging the “stable, rules-based global order” of 2003 by invading Iraq. The sheer brass-plated affrontery of the Americans, British and Australians in purporting to uphold “the sovereign rights of all states” is breath-taking. Not forgetting the matter of the USA’s and the UK’s slavish support for the Saudi Arabian monarchy – a major purchaser of US- and UK-manufactured armaments. Riyadh has not been conspicuous in its advancement of “democracy, freedom and respect for human rights”!

Beijing will be watching these new developments in the Five Eyes relationship closely. No one in the Chinese Foreign Ministry is in any doubt about how the expression “Indo-Pacific” relates to China’s national security. They will be watching Wellington closely for signs that Ron Mark’s neo-imperialist enthusiasm enjoys a wider currency within the Coalition Government. Beijing’s more paranoid analysts may even be wondering whether NZ First’s surprising decision to back Labour in 2017 was a decision made, if not in Washington, then with its wholehearted encouragement.