Any time in politics you end your day having to defend being white is a bad, bad day at the office.

With all the focus on Muller’s TVNZ Breakfast and Q+A train-wreck interviews, Ryan Bridges devastating interview on the AM Show was missed which was a shame because it was probably the best of the worst.

Bridges challenged Muller on his claim that National are the Party for small businesses by pointing out the startling fact that barely 20% of his Cabinet have any Business experience, watching Muller drown during that question is almost too much pain for even a masochist to endure.

But the whole race issue was handled even more appallingly…

Todd Muller quizzed on Māori MP rankings, says nothing wrong with being white

Muller was asked by The AM Show host Ryan Bridge whether he picked his team on merit or race.

“The National Party always picks on merit. When you look at that shadow Cabinet, it is extraordinarily strong, particularly when you compare against this Cabinet where you have three or four heavy-lifters and about 15 empty seats,” he said.

He was also questioned on whether he believed there was anything wrong with being white.

“Of course there is not. You just need to be who you are in this country and what is phenomenal about this country is that we accept people for who they are, for the essence of themselves and their values and what they bring to the country. Both people who have lived here for a long time, Māori, and those who are migrants who have turned up more recently.”

…it’s almost as if National’s new Leadership team simply didn’t expect to be challenged on it.

Look, I don’t think Muller collecting a MAGA hat is racist, unlike my woke comrades, I don’t see the MAGA hat as a literal burning cross, and Muller being a political geek enough to collect one was at least mildly interesting but his capitulation to dump it and his lack of defending it suggested he was blindsided by his own privilege.

Similarly with the shadow cabinet being whiter than white. It’s not that they selected a dozen white volk , it’s that they had no idea how that looked to everyone else. 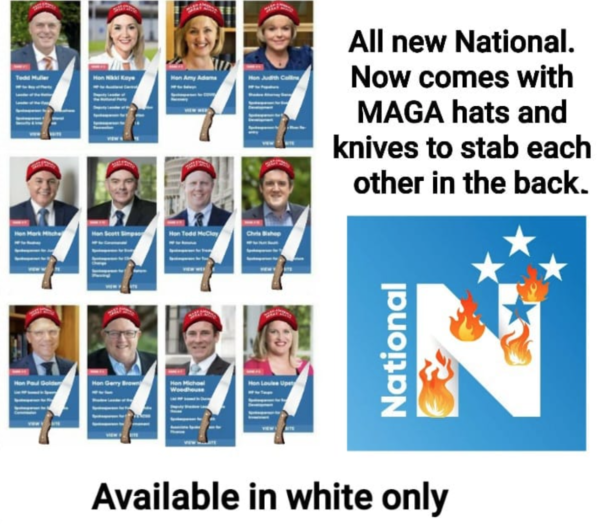 If you are gong to stand for meritocracy, then box that corner, but if you are going to select a dozen white people and then flay around trying to define Paula Goldsmith as Māori to defend that decision, then you have highlighted your own prejudice, you haven’t challenged the charge of bias.

It’s not that National are card carrying members of the KKK, it’s just that they are so privileged that they utterly fail to acknowledge ambition that isn’t white.

This coup was driven by self interest and the fear of unemployment – as such it has no real political depth or value other than self preservation and with their very white decisions, National have said more about the true nature of their selfishness and narrow view of the world they inhabit than anything the Left can paint them out as.