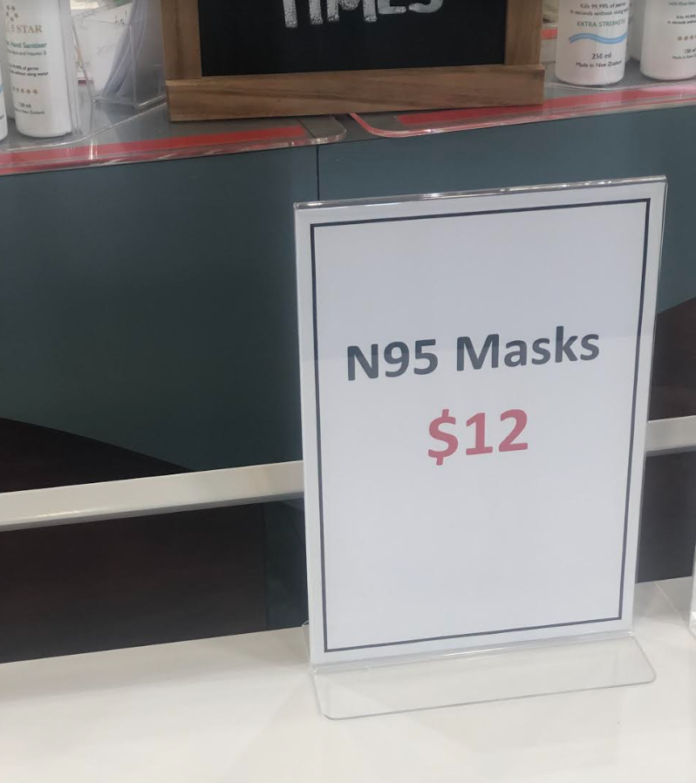 Just before Easter:  the above sign, advertising N95 masks in an Auckland retail outlet approved by government as ‘essential service’.

Currently, a cluster of ‘well off’ businessperson is shuttling 5 plane loads of medical equipment to NZ from China.  Apparently, they are doing this, “at costs” i.e. no profiteering.

The Warehouse founder Sir Stephen Tindall is using his China sourcing office and personally underwriting the cost of the PPE, being imported with help from toy company Zuru

These people must be, The Good Guys.

China is supplying!  Therefore, these guys must also be; The Good Guys?

This is the same China I blogged in, Who to Blame

and later in, If God defends NZ, Who Defends China?

Reading this link, the clear impression one is left with is, guards are necessary because of deviant conduct by other countries.

Trawl back a few days and we find NATO partners of the US: France and Germany, accusing the US of “piracy”.

An OBJECTIVE ANALYSIS (Man on the Clapman Bus) of the above might lead one to ruminate; “Who are the Bad Guys?”

According to the Herald 2 April:

I am currently negotiating importation of N95 masks.

Without the extrapolation of some of the hidden booby traps (e.g. border control China and Uncle Sam paying off bent Chinese bureaucrats to re-route what I have paid for, to The Land of the Free. Also, freight costs, NZ border costs of entry, and crap happens – as it often does; before costs of delivery within NZ and taxes); let’s just assume that I could land these in NZ at $5 per mask – which is what I’ve costed using approved freight agencies.

Why the markup?  In this particular case, for my costs of getting N95 to NZ and all the hassle and risk I take. Such as:

(a) pay up front at China factory;

(b) Get the goods through the labyrinth of deviants and bad guys in China – to NZ.

(c) Get through NZ border controls.

(c) End up with no masks and minus the capital I send to China.

If a ‘essential service’ retail point, buys from me at $6.00 a mask and then sells at $12 a mask, in this time of national tragedy and stress; who really are the bad guys?