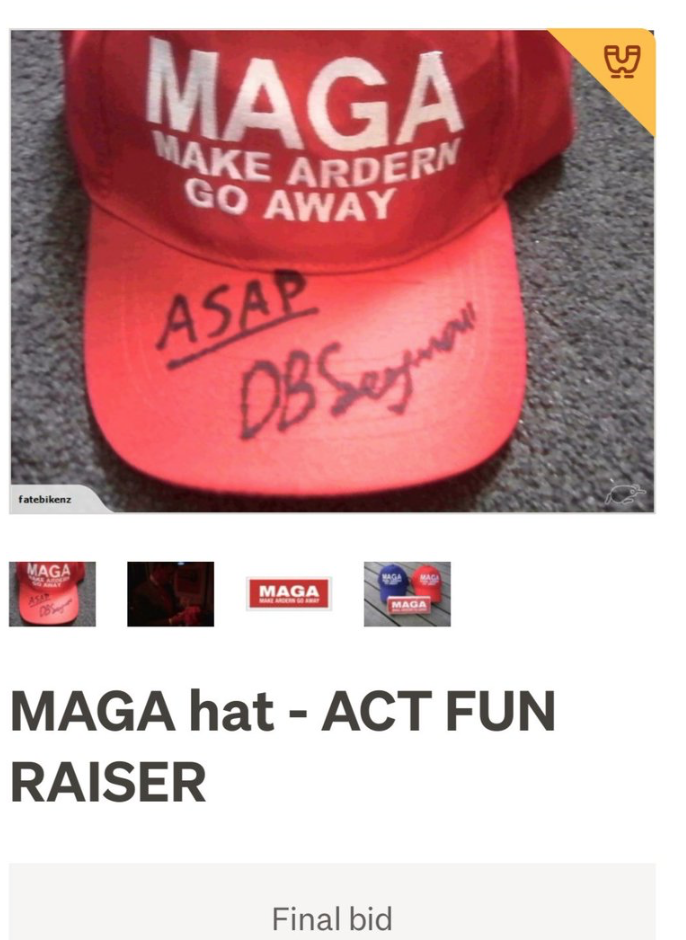 ACT Party leader David Seymour has come under fire after accepting a donation from a far-right extremist and characterising the man’s threats to destroy mosques as “a silly comment on Facebook”.

In October, Newsroom reported that a far-right extremist who had threatened to “destroy mosque after mosque till I am taken out” had made a donation to the ACT Party by auctioning a hat signed by Seymour.

Mike Allen is a Christchurch e-bike salesman whose parody Trump hats – which read “Make Ardern Go Away” – went viral after he was temporarily banned from selling them on TradeMe. Newsroom then reported that the proceeds from the hats went towards funding advertisements for far-right Facebook pages, including the now-deleted page on which Allen threatened to destroy mosques.

On Sunday, left-wing activist Byron Clark called for Seymour to pass the donation on to an organisation that could make better use of it, like the Foundation Against Islamophobia and Racism (FAIR) or the Holocaust Centre of New Zealand.

Clark, who regularly monitors New Zealand’s far-right, framed the call as a Twitter campaign with the hashtag #DonateDavid.

“David Seymour said before that he can’t control who’s going to vote for him and I understand that position, but he can control whether or not he takes money from the far-right. So I’ve challenged him to donate that money he received to a cause like the Holocaust Centre of New Zealand or the fund for the March 15 shooting victims,” Clark told Newsroom.

“People on the far-right who are seeing David Seymour accepting money from them are seeing it as a legitimisation of some of their beliefs, that a mainstream politician is not refusing to take money from them,” he said.

Other left-wing activist groups like Auckland Peace Action and Paparoa also rallied around the hashtag.

Look, there are plenty of good reasons to attack ACT, but trying to build a nobody into a Nazi supporter of ACT and claiming that ACT have somehow benefited from this far right relationship is just nonsense.

I’m no fan of ACT, I’m currently running a campaign in Epsom to get Labour, Green & NZ First voters to vote for Paul Goldsmith to lock ACT out of power because it’s increasingly apparent that the woke keep handing ACT free speech ammunition and that it could well be a National-ACT Government which no one with empathy, compassion or basic reading skills wants.

I’m also no fan of Trump like hats and I’m no fan of Muslim bigotry, but Newsrooms story on this right wing clown is just all over the place.

1 – If some dickhead wants to sell Make Ardern Go Away Hats, then you know what, this being a progressive liberal democracy means he can. Do I think it’s distasteful, sure do, but personal taste is not a good enough reason to ban him from selling dickhead hats.

3 – Regarding the whole burning down a Mosque thing, he was responding to a news story about a Muslim acid attack and said that if someone threw acid into his daughters face, he’d burn down a mosque. Not a nice thing to say, but within the context it doesn’t make him Adolf Hitler. Once you know the context of his comment doesn’t it make Newsrooms coverage of it as disingenuous as The Spinoffs coverage of the Labour Party sexual assault complaint?

4 – He said Islam is a problem, well lots of people say Christianity is a problem too. Personally I think the vast scientific, mathematic and astronomical break throughs we learned in the West from Muslim scholars was essential for our collective advancement as a civilisation and that the extremes we see are more to do with the radicalisation the West generates by propping up abusive regimes. But hey, we are all allowed to have opinions, even if they are ill thought out and dumb.

5 – ACT signed a hat and it was raffled for some nothing amount and Newsroom are trying to create a Nazi where one isn’t and trying to claim ACT are profiting from this straw man Nazi.

If I said, ‘If a dirty pervert Catholic priest molested my daughter I’d burn down every Cathedral I could find’ – should a political party return my donation?

This story and the attempt to build the protagonist up as a Nazi and ACT benefiting from Nazi donations is honestly such an embarrassing hot mess. There are plenty of good reasons to hate ACT, inventing them is lazy.

This is bullshit journalism and basic shit blogging. It is one sided manipulative news like this that is killing off journalism, not saving it.