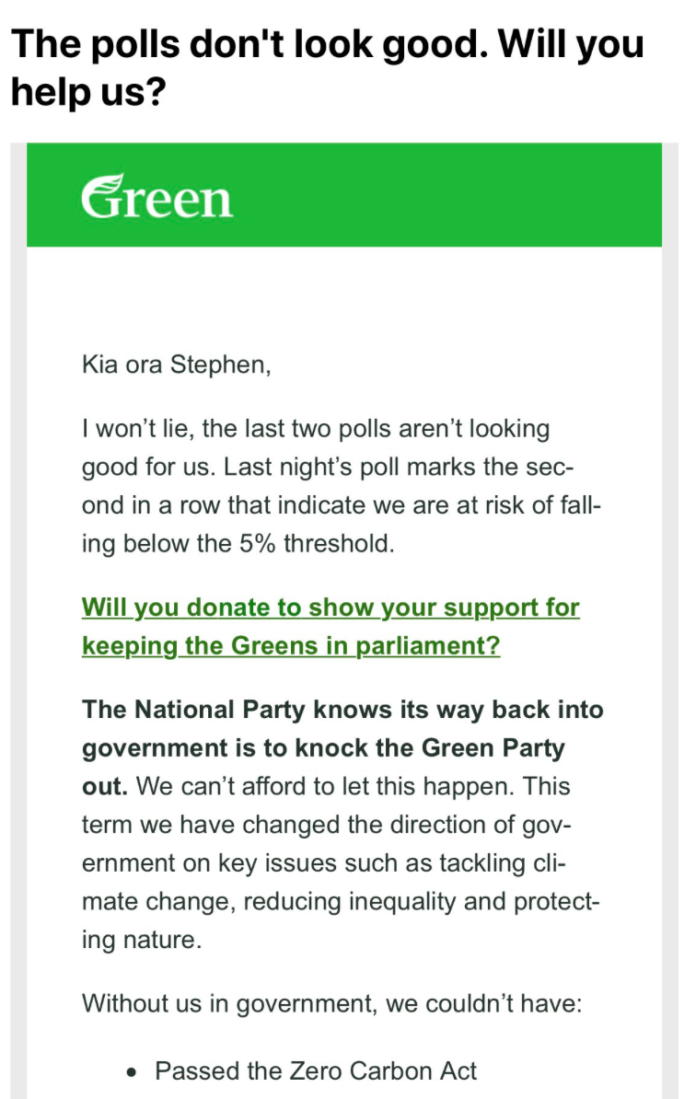 So Labour are forcing those in emergency housing to pay 25% rent, NZF are handing photos of journalists over to right wing hate blogs, and the Greens woke identity politics is so alienating it’s making them politically irrelevant.

The Greens are in denial about a looming reality the Daily Blog has been warning about for over 2 years, that their middle class woke identity politics is so alienating it will see them slip below the 5% threshold. A reality they are now urgently contacting their supporters about… 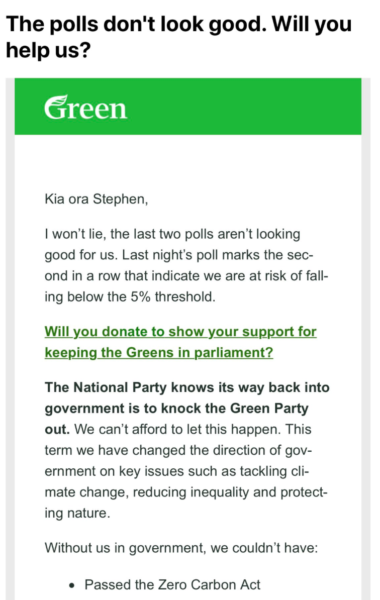 …Green supporters will explain away the slumping support as climate change becoming mainstream.

The Greens have gone backwards in every election over the last decade, their ‘solution’ of being carbon neutral in 30 years isn’t a solution, it’s a joke looking for a punchline.

The constant claim that it’s NZ First holding them back just suggests they have no tactical or strategic people in the back room with the smarts to deal with Winston.

The Greens have a cannabis referendum and had 170 000 on the streets as part of the largest protest in NZs history and the climate crisis exacerbated by neoliberal capitalism is the ONLY issue.

Instead of playing to those strengths, the Greens have lost themselves on woke crusades like inclusive abortion language, blaming white people for the Christchurch Terror attack, reclaiming the word Cunt and having a Conservation Minister like Eugenie Sage who simply does what the Ministry tells her to do.

The most painful part of this is that if they do slip under 5% they will refuse point blank to accept that maybe they had a hand in making themselves politically irrelevant, it will all be the CisHet Patriarchy’s fault. 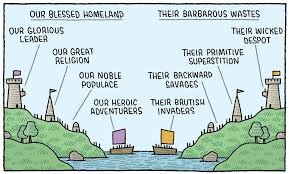 Watching tribal labour activists trying to justify why charging vulnerable people in emergency housing 25% rent is the righteous thing to do has to be this years winner for intellectual sophistry masquerading as political justification.

To equate state housing to a fucking motel room to explain forcing homeless people in emergency accommodation pay 25% rent is almost as much fun as watching National goons masquerading as the defenders of Journalism.

Labour didn’t expect to win in 2017, they had no 100 day plan to reform the right wing public service and as such their promises of ‘transformation’ are hollow and meaningless as the toxic cultures inside the neoliberal bureaucracy keep doing what they do.

Let’s be clear, the ONLY reason Labour are forcing vulnerable people in emergency motels to pay 25% rent is because the bloody Wellington Bureaucrats spoke out about the ‘anomaly’ of allowing emergency tenants free rent while charging state house tenants 25% rentals.

The total lack of vision and imagination could not be more set in concrete than the announcement they are borrowing $12 Billion to build more bloody roads when we could be  borrowing almost ten times that and it still wouldn’t damage our credit rating.

‪Labour promised billions in roads and only got a 2% poll bump – they should have done more than the cautious bare minimum. 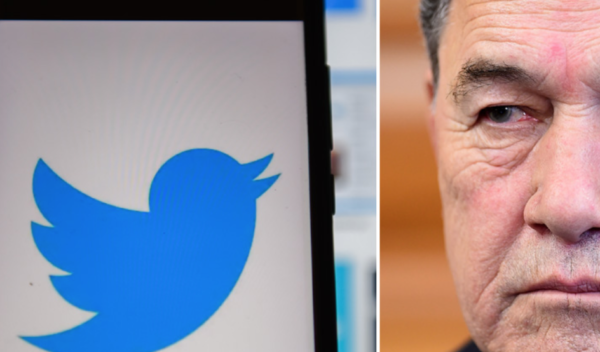 Doesn’t it smell like Simon Lusk styled dirty politics? Twitter bots praising the dear leader and taking photos of journalists who are investigating corruption and then passing these photos along to a far right hate blog?

NZ First has denied using Simon Lusk, however desperation drives people into the arms of dark agents and with NZ First now polling at 3% they are in enormous danger of not being returned.

We all have righteous grievance with the pitiful gains made under this Government, but they are made against the backdrop of nearly a decade of underfunding. They deserve a second term to try and implement the transformational change promised, but that second term is going to be bitterly fought and won.

We underestimate how easy it is for National+ACT to win this year.

If you live in Epsom and vote Labour/Greens or NZ First – consider this tactical voting strategy to prevent ACT having the numbers to form a Government with National in September.