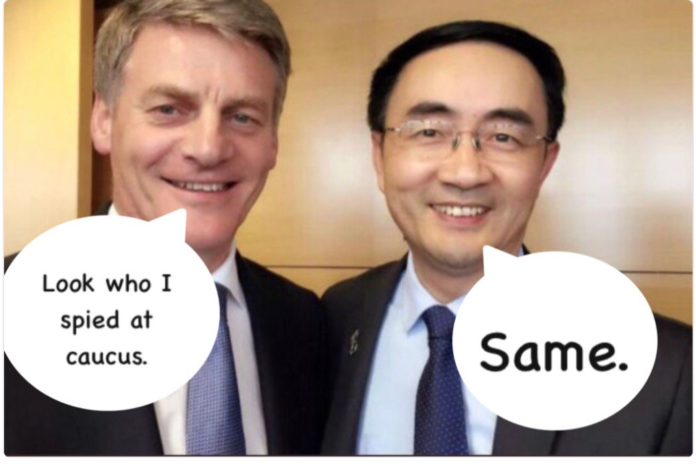 Hey everyone, how are you.

Look, I appreciate that anyone who questions Chinese influence in NZ politics gets outed on twitter as a xenophobic racist, but only the Spinoff really listens to the woke anymore and I think we are getting to a point in all of this where National’s constant acquiescence to Chinese Business is fast becoming a national security issue…

National MP Todd McClay has been accused of “echoing” the Chinese government to “justify mass detentions” in Xinjiang, in a damning new report about China’s growing global influence.

McClay is criticised in the report for how he has characterised facilities in China’s Xinjiang region – often described as “detention camps” – where it’s understood millions of Uyghurs and other Muslim minorities are detained.

At this stage, National is less a political party and more a front for Chinese business interests which are a front for the Chinese Government.

Right now we have an alleged Chinese Spy inside the National Party Caucus! Show the real level of outrage this generates inside you by signing the petition I set up this week demanding that Jian Yang be removed from National Party List.

The National Party and their private business relationships with Chinese business can’t be ignored any longer, it’s time to call them on it and demand change.