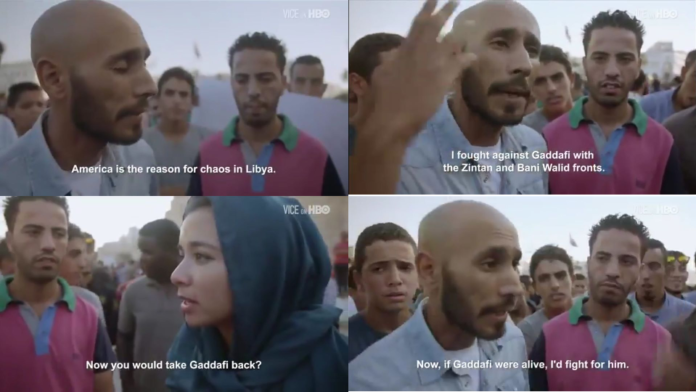 It has been said, with some justification, that you either die a hero or you live long enough to see yourself become the villain.

Yet while that might be the progression for a theatrical script or series … history occasionally moves with an internal logic that is downright the inverse. Men condemned in their own day may be judged more kindly with death and hindsight; not least due to their mortality giving vigorous illustration to that Chestertonian maxim of never tearing down a fence without first understanding why it was there in the first place.

Gaddafi himself made a direct statement to this effect – informing the E.U. that in his absence, there would be nothing stopping a huge wave of migration from Africa across the Mediterranean to the North.

Although that is not why I mention the principle here today. [And not least because Gaddafi using the above as an intentional threat and/or bargaining chip rather undercuts the maxim’s more ‘pure’ application, somewhat]

Rather, it is thinking about another figure a few countries over and cast in a not too dissimilar light – Saddam Hussein.

Now, I do not mean to make the case for Hussein the Hero. It would not be a good fit of a term. But as applies a fence that is up, the removal of which causes all manner of hell to break loose – well, that is much closer to an apt summation.

It is a matter of historical record that Hussein was strongly concerned about Sunni extremist currents – both within Iraq, as well as operating more broadly (he oddly enough put forward an offer of assistance to the Americans following the 1993 World Trade Center attack – I say “oddly enough”, because it was another World Trade Center attack, the World Trade Center attacks, almost a decade later which finally provided the intermediate-range impetus for his ouster); and felt that in his absence, the resultant chaotic turbulence would render his country not only utterly ungovernable for its own people, but an ongoing nightmare for any foreign imposer who might dare to deign to try.

In this he was largely proven correct – with the added interest that the Iranian influence that the West had so accomodatingly backed Hussein to counter in the 1980s … was also now expanding across Mesopotamia to an eventual high-water mark not seen since the height of the Sassanids, some 1,400 years before.

Why do I mention this? Well, in the newspapers this week there have been any number of ‘retrospectives’ upon the decade that is shortly to draw to its inexorable close. More than a few of these have – understandably – made reference to the Arab Spring events that dominated headlines in late 2010 on through 2011.

The general emotional tone and tenor of these brief blurbs upon faintly-footnoted hardly-even-history has been that it was an idealistic series of uprisings that – with the exception of Tunisia – basically either fizzled out, or were forcibly snuffed out. And even in those handful of instances wherein this didn’t happen, the resultant civil breakdown was held to be more than a bit unfortunate in practice. (Either because it didn’t remove Assad from Syria, and never mind all the other occurrences there; or because it didn’t just neatly stop being a breakdown in Libya with the ouster of Gaddafi; and I’m entirely unsurprised that I’m yet to see anything more than a brief mention of the word “Yemen”, as applies either Houthis or Saudi-authored humanitarian crisis there – it’s an inconvenient particular-narrative for the leitmotif of the anthology, one supposes)

There have also been frequent citations for ISIS in these roundups; which is again entirely understandable. Indeed, it would be more remarkable if there weren’t mention for the self-declared Caliphate and its actions. Rarely, since the Nazis, have any temporarily-prominent group of generally labelled “Evil” antagonists cast such an incredibly deep and looming shadow within the popular imagination.

And while the metanarrative on ISIS has thankfully moved on somewhat from the heady days of just a few years ago, wherein you’d occasionally encounter Western headlines defiantly insisting “How Saddam Hussein Gave Us ISIS” (seriously – that’s a real headline, from the New York Times in 2015) through to a subtly unspoken recognition that maybe, just maybe, it’s the lack of a Saddam Hussein more genuinely responsible for same …

… the “confession” has meant nothing.

It won’t be too many years into the new decade forthcoming – months only, perhaps – before we’ll find yet another chorus of bright-minded idealists (and it is a curious thing to consider, that George W. Bush was arguably something of a ‘liberal intergovernmentalist’ in these regards) clamouring for yet another oppressive Wall to be brought tumbling down.

Which, from rather far away, may indeed seem the ideal thing to do. Even as, from up much closer – where one is in danger of being struck by the rubble nor the shrapnel which naturally comes a-tumbling from such a de-walling – this is instead looked upon as a far more nightmarish scenario. Even before we consider what comes after in the gap where once the Wall might have redoubtably, if despotically stood.

The 2010s, much like the 2000s and the 1990s before them, were supposed to be a successive and ultimately successful era in the ongoing – allegedly inexorable – march toward a Borderless World. A reversal of whatever tottering, faltering stumbles had come to characterize the concluding years or months of the past one; with new, fresh enthusiasm and vigour marshalled towards the making up for lost time and of lost ground ensuing.

That’s certainly how it started, anyway.

But the signature thing of the Borderless World, is that it is a World wherein all manner of Fences have been torn down, helter-skelter and pell-mell. (Thus affording any number of opportunities for McWorld and its state-level bearers-of-premium-content to run rampant, bite off more than it can chew, and thence not-critically-reflect on just why it is that it’s facing push-back in any variety of forms)

Perhaps the 2020s may be different. It is certainly a combination of numerals at least semi-oftenly linked to clarity of vision, especially and particularly in hindsight.

I wouldn’t bet on it, though. If you’re convinced that the Eschaton has already become Immanentized – that you’re already living in the End of History, and you’re just waiting somewhat impatiently (and tantrum-throwingly) for everybody else to realize this and catch up … then the supreme Fence, that is really more of a suspended road-way girded by parapets and pylons, of understanding causes have effects, movements ripples, and the flows of events a narrative logic more powerful than their initiators … well, that’s all got to go.

Can’t have “progress” if you’re too overly concerned about what’s already there, and how it might dare to change un-directed in response to a bit of prodding, now, can you.

I have never been big on the notion that a lack of understanding of history dooms one to its repeating; but have instead preferred the notion that while history may not, strictly speaking, repeat … it sure does rhyme.

With that in mind, one would hope that the reflective – the opposite – of the removal of “Fence” would be “Sense”.

Yet far more often than not, its repetition regardless makes it “Hence…”, instead.