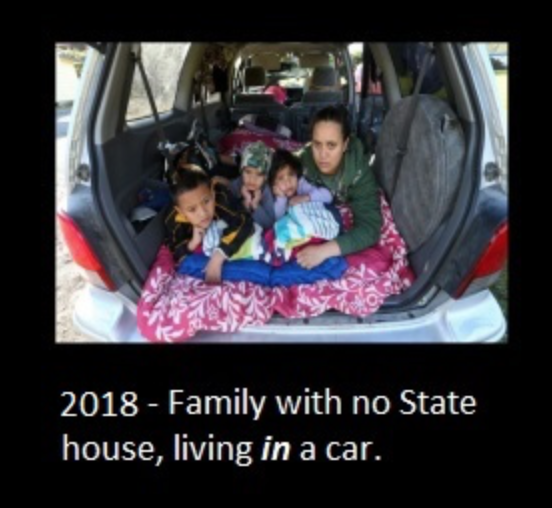 He’s promising the racing industry a multi-million dollar track that can be used even when its pouring with rain. Mr Peters says it is expected to cost around $10 million to construct.

It comes as several races throughout the country had to be abandoned.

The track could be in Waikato to boost the region and be closer to some of the breeders, with Mr Peters saying Waikato would be “a good option”.

The Minister says both taxpayers and the industry will be helping to pay for the new track.

Mr Peters is also promising tax relief for owners who are breeding horses for racing. He says the current legislation, which he delivered last time he was Racing Minister, isn’t working like it should.

This, at a time when homelessness in this country has been steadily rising since the 2006 Census;

The number of homeless people in New Zealand rose between the last two Census counts, a new study says.

The study used the Government’s official definition of homeless, which is people living in severely crowded houses, in motels, boarding houses, on the street or in cars.

Between 2006 and 2013, the rise in homeless people outstripped population growth.  New Zealand’s population grew by 4.8 per cent over this period, while the number of homeless grew by 25 per cent.

As Prime Minister Ardern said on TV3’s The Nation on 21 October last year;

“When you have a market economy, it all comes down to whether or not you acknowledge where the market has failed and where intervention is required. Has it failed our people in recent times? Yes. How can you claim you’ve been successful when you have growth roughly 3 percent, but you’ve got the worst homelessness in the developed world?”

For Winston Peters to be offering tax-breaks and taxpayer funded covered racetracks, at a time of critical need for boosting funding for housing, hospitals, mental healthcare, and other services is a return to the corporate cronyism we’ve experienced for the last nine years under National.

There is probably more. National’s nine years in office has been less free-market and more corporate welfare than Muldoonism at it’s height. They’ve simply been more adept at hiding it.

In 2013, when it came to throwing taxpayers’ dollars at The Hobbit, Winston Peters was scathing at National’s corporate welfare  largesse;

“Now the first movie has grossed more than $1 billion, Warner Brothers should repay the $67 million subsidy the movie moguls sucked from Kiwi taxpayers.”

After all the criticisms from Labour and NZ First at National’s corporate welfarism, the Coalition government has succumbed to the same folly of throwing money – our money! – at multi-million dollar businesses.

For an industry sector that turns over $1.6 billion, it beggars belief that they have their corporate hands out for taxpayer largesse and tax breaks. What other industry will be receiving tax breaks? Tourism? Wine and beer producers? Why not our nascent computer-gaming industry? Or Rocketlabs?

Key must be laughing his head off at this fiasco. After all the ‘stick’ given to Key and his National government for their corporate welfare, the Labour-led coalition have engaged in the same practice – only three months into their first term.

Was there no one with sufficient political nouse in Labour or NZ First’s Parliamentary offices to express reservations over this daft plan? That giving tax-dollars and tax-breaks to a “sport” enjoyed by predominantly affluent New Zealanders is not a particularly good idea? Especially when Labour and NZ First (and the Greens) made so much of New Zealand’s housing crisis during last year’s election campaign?

In effect, Peters has just handed the National Opposition a bloody big stick with which to whack the Coalition over their  heads. English and his minions will be gleefully strategising over how they can best use this corporate welfare to attack the Coalition.

Side-note: Interestingly, the website is done in Labour Party colours – not National’s own blue livery. The National Party is not even directly mentioned anywhere on the main page. (Though the “Privacy Policy” link will take you to the National Party website. The authorisation statement is by “G. Hamilton”, National’s General Manager – though few people would know that.)

The racing industry has complained that a covered race-track is essential to allow all-weather events to be held. If so, let the racing industry pay for it. The “Sport of Kings” should not be paid from the taxes of hard-working New Zealanders who expect essential services in health, education, conservation, housing, mental health, policing, etc from their hard-earned tax-dollars. Not enhancing horse-racing facilities.

For perhaps the first (and hopefully the only) time, I find myself nodding in agreement with far-right blogger and former Libertarian/ACT candidate, Lindsay Mitchell, when she wrote her own critique of Peters’ plans;

Today [28 January] Racing Minister Winston Peters apparently promised an all weather track at the cost of $10 million (double it for starters) and either promised or called for tax breaks because the industry (breeding in particular) brings in so much money.

Government picking winners is a recipe for corruption and injustice. We cannot expect New Zealanders who have not a skerrick of interest in the racing industry to disproportionately pay taxes to advance it.

Tax breaks are not subsidies if they are applied universally. Reduce tax period.

You are a guardian of public money Winston. Not a private investor.

On the upside, I am looking forward to our Prime anti-poverty crusader getting it in the neck today over her government’s support for “rich pricks”.

I, for one, will not be defending this policy from criticism from the Right. Because with thousands of New Zealanders homeless and struggling in poverty, it is indefensible. Absolutely, utterly, indefensible.

If the Coalition government wants to assist the racing industry, and they are incapable of raising their own funds, then a suitable compromise is  available. The State could easily borrow on behalf of the racing industry and on-lend to the appropriate racing club. Governments with good credit ratings can generally borrow at lower interest rates than from the commercial banking sector.

But it would have to be paid back.

The responsibility of this Coalition government is simple: Putting roofs over homeless families.

Not roofs over race tracks.

TVNZ:   Winston Peters announces a multi-million dollar all weather horse racing track is on the way

Fairfax media:  Peters – Hobbit subsidy should be handed back

Fairfax media:  Winston Peters back at helm of racing as a return to the old days is heralded

The Corporate Welfare of Tiwai Point – An exercise in National’s “prudent fiscal management”?