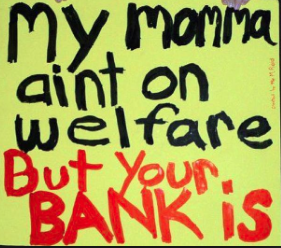 3 October 2007: Meridian and NZAS/Rio Tinto sign agreement for the continuous supply of 572 megawatts of power to the Tiwai Point smelter for 2013 to 2030.

10 August 2012: Rio Tinto CEO, Tom Albanese, warns that the smelter will be closed “if they cannot be viable, we have difficult decisions to make”.

8 August 2013: National government announces agreement to give cash subsidy of  $30 million  to Rio Tinto, and Meridian Energy to supply the smelter with cheaper (price undisclosed) electricity than agreed in 2007.

9 August 2013: Bill English confirms that he has not sought a guarantee from Rio Tinto that jobs will not be lost at the smelter.

There is no other way to describe events between October 2007 and February this year; we were conned by a multi-national mining/metals giant that exploited National’s core-policies, for their own gain.

How else to describe the above events?

Once National announced their intention to partially-privatise Meridian Energy and float it on the New Zealand  (and Australian) stock exchanges – Rio Tinto realised that the price of Meridian shares would be determined by the income they derived from selling electricity.

”Rio Tinto took advantage of Mr Key’s obsession with asset sales by threatening to derail the sale of Meridian by closing the Tiwai smelter, so Mr Key gave them $30 million of public money.”

Rio Tinto was Meridian’s biggest customer, supplying  Tiwai Point  with approximately 15% of New Zealand’s total  electricity output. As such, Rio Tinto had Meridian  (and by proxy, the National Government) by the balls. And on 7 September 2012 and 7 August 2013, Rio Tinto squeezed.

By making  130 workers redundant, it sent National, and it’s compliant  leader, a clear message; “Don’t f**k with us, Johnny-boy. These 130 plebes are an example of what we can do to screw you over“.

Had Rio Tinto followed through on it’s threats (and make no mistake – they were threats), it would have brought down the government. That would have ended Key’s career and his reputation would have been in tatters. No Knighthood or beersies for Johnny-boy!

Key had no choice but to capitulate. Key admitted as such when he said on 14 February,

“At the end of the day I think the Government took a modest step to ensure there was a smooth potential transition there – that we didn’t have a glut of electricity we couldn’t use or that thousands and thousands of Southland jobs are out at risk.”

The resulting loss of 700 jobs at the smelter,  and a further 2,500 downstream throughout Southland, would certainly have been embarrassing for Key and damaging to National .  But this is a government that has overseen the sacking of approximately 3,000 state sector workers (up to August 2012) and 29,472 few jobs in the manufacturing sector, since 2006 (2013 Census results), so unemployment per se is not a problem that overly concerns right-wing government ministers.

This shabby, self-serving, politically-expedient exercise, has cost us – the tax-payer – $30 million, plus an even cheaper electricity deal than probably anyone else in this country gets. No wonder the contract price is even more uber secret than the goings-on at the GCSB – the public would erupt in fury if they came to know what our electricity was being sold for, whilst the rest of us have mounting power prices, year after year after year.

To which our well-heeled Prime Minister responded thusly,

“It’s one of those things we’d love to do if we had the cash. As the country moves back to surplus it’s one of the areas we can look at but I think most people would accept this isn’t the time we have lots of extra cash.”

Interesting. Key and his Cabinet cronies found $30 million to throw at a multi-national corporation – which only six months later posted a $4.43 billion ($US3.7 billion) annual after-tax profit.

But no money for the lowest paid, hardest-working people (predominantly women) in our community. Key responded to Russell Norman’s criticism of the $30 million welfare handout,

If only we could believe Key. But considering that thousands lost their jobs since the Global Financial Crisis, and National has not bailed out any other company, the Prime Minister’s protestations ring hollow.

In fact, it’s fairly well obvious that the taxpayer-funded payout to Rio Tinto had nothing to do with jobs or the Southland economy – and everything to do with the state assets sales. As David Hargreaves wrote on Interest.co.nz,

“So, it will cost you, I and him and her a combined NZ$30 million of our hard-earned to keep the Tiwai Point aluminium smelter open just long enough so that the Government can flog off 49% of Meridian Energy.

That’s about the size of the deal struck between Meridian and the company controlled by global giant Rio Tinto, with additional sugar coating supplied by the Government, courtesy of us.

From the point the Government first stepped in earlier this year in an attempt to ‘help out’ it was always obvious tax payers were going to be forced to front up with some readies for the pleasure of keeping the always controversial smelter running for a while longer.

I have no doubt that the smelter will be closed in 2017, which is now when the owners get the first chance to pull the plug.”

The most asinine aspect to this deal (and there are many) is that Finance Minister,  Bill English, told Radio New Zealand on 9 August 2013 that “ensuring the safety of those jobs was not part of the deal and no undertakings were sought on the operation of the company”.

No guarantee for preserving jobs?!

Question: So what, precisely, did $30 million buy?

This was a most odious, repugnant deal.

Every New Zealander contributed some of their hard-earned cash, which ended up in Rio Tinto’s shareholder’s pockets.

All done to achieve the sale of state assets which we own.

John Key gave away our money; which ended up in shareholder’s pockets; to sell assets we own; to other share investors.

This is the crazy side of National’s economic policy. This is  corporate welfare and crony capitalism rolled into one. Which begs the question to National’s supporters; is this what they see as “prudent fiscal management”?

How “prudent” is it to pay a subsidy to a multi-national corporation, that posted a multi-billion dollar after-tax profit,  that will most likely close the smelter regardless in some near future date (2017?)?

And why was that $30 million not invested in other job creation industries in Southland, so that a multi-national corporation could not hold this country to ransom? After Rio Tinto and Warner Bros – who is next to hold a gun to our collective head demanding a taxpayer subsidy/payout?

This was an odious, repugnant and wasteful deal.

This should not be allowed to be forgotten this election.

Interest.co.nz: Govt pays NZ$30 mln to smelter owners in a deal that will clear the way for the float of Meridian Energy

Interest.co.nz:  Opinion: There was a certain inevitability the long-suffering taxpayer would be ‘invited’ to cough up for the pleasure of keeping the Tiwai Point smelter open