Labour are getting played by National over Child Poverty legislation….

National leader Bill English has continued to slam a “pathetic attempt at bipartisanship” from the Government on child poverty but acknowledged today a briefing was offered in 2017.

Prime Minister Jacinda Ardern said on Tuesday that she had written to English on the 13th of December outlining the bill and offering a briefing on her new child poverty measure, which the Government intends to write into law.

She was responding to English’s criticism on Monday that the Government was talking up bipartisanship around the issue but didn’t offer a briefing on the measure until Wednesday, when the legislation was due to be introduced.

…by playing up the bi-partisanship desires, Labour have opened the door for English to criticise Jacinda for effectively lying and not being genuine in her offer.

Here is the actual timeline… 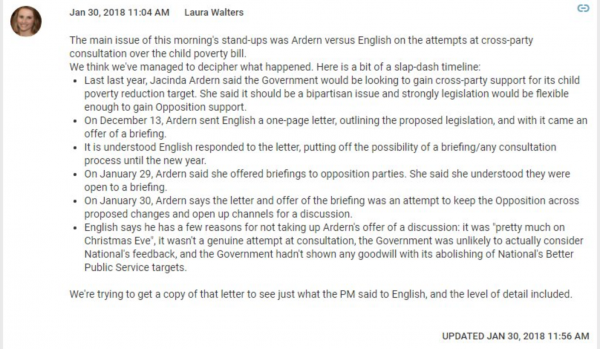 …instead of championing a new Child Poverty legislation while flaying National for implementing failed right wing experiments that hurt those kids in poverty, we are arguing about whether Jacinda is being honest with Bill English!

This is not the debate the new Government should be having! Their desire to be inclusive only works when you have an Opposition that is genuinely constructive, at what point will the Labour leadership team comprehend that National are vicious power hungry born to rule pricks?

When does Labour learn you can’t work with National?

How many times does National need to spit directly into Jacinda’s face before someone realises that bi-partisianship simply makes the new Government look weak?

When National lied directly to the country’s face about the $11.7billion budget hole? Was that a good time to appreciate National aren’t constructive?

When National tricked them into believing  they didn’t have the numbers to elect Trevor Mallard as Speaker simply by Simon Bridges having a puzzled look on his face? Was that a good time for Labour to appreciate National will deceive and manipulate to win?

When National forced Labour to give them more seats on select committees dooming any legislation to being roadblocked through the process, was that a good time to realise National are the danger?

Instead of championing the new Child Poverty law we are arguing about Jacinda’s offer of bipartisanship.

It’s time the new Government started getting a tad more ruthless and direct with its agenda and looking like winners rather than looking weak with all the bipartisanship virtue signalling.