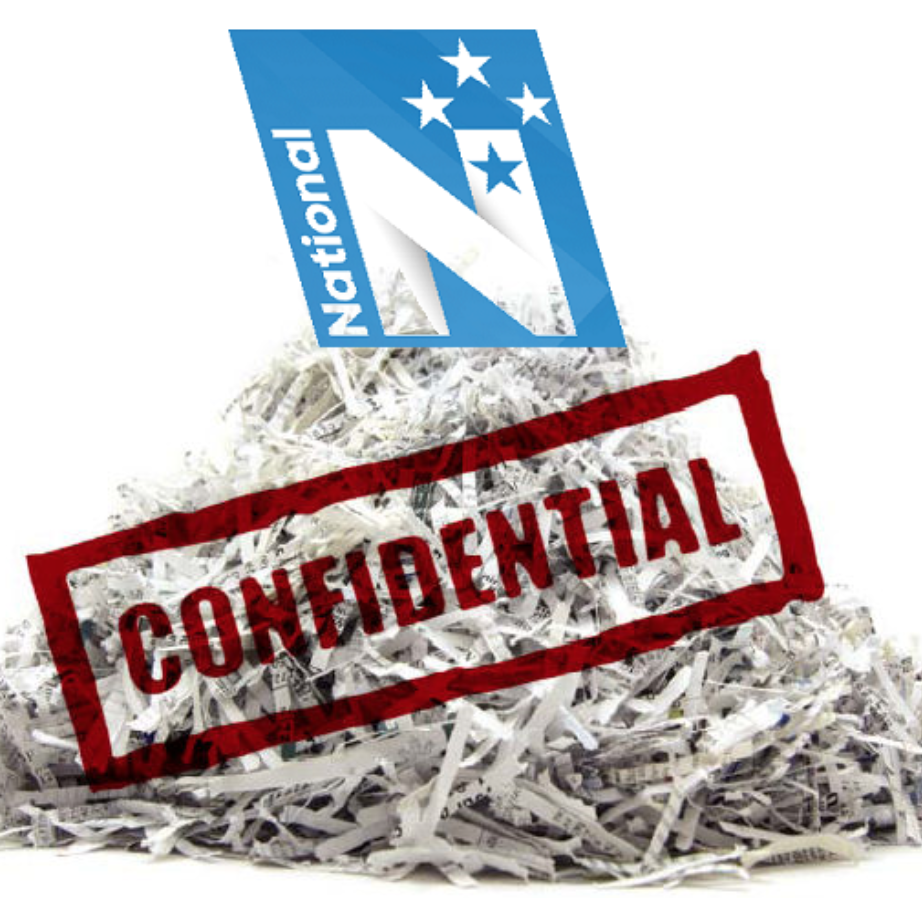 Bill English has been kicking up a shit-storm, demanding that Labour release what they have been describing as a “secret coalition agreement” between Labour and NZ First.

“This is a government that said it would be more transparent and more open. The document is clearly there somewhere, it must be important because it’s 38 pages and it’s come out of the agreement – people deserve to see it.

It sounds like there might be quite a lot more in this other piece of paper. If it’s at the core of how the Government’s going to run, it’s in the public interest.”

English defended his insistence that the coalition notes be made public by comparing the Coalition with his own previous administration “transparency”;

Which is a patently dishonest claim considering that the last nine years of National governance has been one of secrecy; obstructing OIA requests; increased state surveillance; and misleading the public.

Former Dear Leader, “Sir” John Key was brazenly open only in one respect of the OIA. He openly conceded that his administration regularly and willfully delayed releasing OIA requested information for purely political purposes;

To which  Chief Ombudsman, Dame Beverley Wakem, responded by reminding Key and his colleagues they were were not permitted to flout the OIA legislation by deliberately delaying up to the  twenty-day deadline;

During it’s nine years in office, National has widened the powers of the GCSB to permit it to spy on all New Zealanders; mis-used GCSB surveillance to secure leadership of the World Trade Organisation; spied on our Pacific neighbours; and unlawfully harassed National’s critics such as Nicky Hager and Martyn Bradbury.

But when challenged on whether the GCSB was conducting mass surveillance on New Zealanders, Key simply point-blank refused to comment.

Who can forget National’s obstruction and prevarication – including contradictory statements – over the SAS-led attack on two villages in the Tirgiran Valley in 2010 which caused fifteen injuries and the tragic deaths of six innocent Afghan civilians, including a young child;

Just recently, it was revealed that an OIA request by Radio NZ, for details regarding the business case for a proposed new multi-million dollar Auckland City rail-line, was met with deliberate stone-walling from then-Minister, Simon Bridge’s “office“;

Initially, his officials opposed the document being released, saying it was part of an unsuccessful budget bid, but were told by KiwiRail on Thursday that the law was clear it should be released.

After consulting its legal team, KiwiRail told Mr Bridge’s office it would struggle to justify not releasing it.

But on Friday Mr Bridges’ office again urged KiwiRail not to release the business plan.

This time it used a scatter-gun approach – arguing the report was only a draft, was on a misleading template and that its proposed release was making them “extremely uncomfortable”.

… said KiwiRail made it clear the business case did not need to be kept secret and that the minister’s behaviour was worrying.

Chief Ombudsman, Peter Boshier, was obviously frustrated and disturbed by National’s attempt to suppress the Kiwirail Report and their continual flouting of the OIA;

“It’s so important that we get this Act flowing better than it has been and it hasn’t necessarily flowed that well.

And that’s why I’ve used this as an opportunity to exhort the Prime Minister to help me and support me in getting the roles crystal clear.

We are coming down increasingly heavier where we see instances where the Act is not being compiled with – and in some cases, where it’s been flouted.

I think there’s an understanding that we mean business.”

Hardly the hallmarks of an “open and transparent” government when a Minister’s “office” is prepared to conspire to break the law by circumventing the Official Information Act. Also not helped when the ombudsman’s office has to write a scathing letter to the Prime Minister demanding they obey the law.

As if to underscore National’s mania for secrecy, in 2011/12, New Zealand’s ranking in media freedom by Reporters Without Borders fell from eighth place  in 2010, to  thirteenth, in the world.

The Herald’s senior reporter, Matthew Backhouse, wrote at the time;

The report did not say what was behind the fall – but it comes after a year in which newsrooms were searched by police, the New Zealand Herald was temporarily banned from the parliamentary press gallery and a proposed new law sought to give police greater powers to enter newsrooms.

The report said journalists were struggling with the Official Information Act, which gives government agencies long periods of time to respond to requests. Sometimes journalists were asked to pay for information.

“In August 2016, the government revealed a grim future for whistleblowers, announcing a bill that would criminalise leaking government information to the media and would dramatically increase the surveillance powers of the intelligence services. Journalists, bloggers, and civil society representatives would be among the potential targets of the proposed law, which could be adopted in 2017.”

“Our lower standing is due to the growing list of government agencies trying to hide information by thwarting the Official Information Act, and these agencies are ruining our reputation.”

What is even more grimly ironic is that having been thrown out of office, National persists in refusing to disclose information to the public.

“This is a government that said it would be more transparent and more open. The document is clearly there somewhere, it must be important because it’s 38 pages and it’s come out of the agreement – people deserve to see it.

It sounds like there might be quite a lot more in this other piece of paper. If it’s at the core of how the Government’s going to run, it’s in the public interest.”

On at least two occassions, Ms Ferguson asked Bill English if he would be releasing the text of coalitions negotiations with NZ First. English first replied;

“Well again, I’m not going to be discussing that. It was part of the negotiations and New Zealand First actually required, rightly, confidentiality about those negotiations.”

When pressed, English was adamant that there would be no public disclosure;

“I’m honour bound to stick with the confidentiality agreement. As are the other parties.”

Note English’s reference to “the other parties“.

That would be Labour. No one else was in the room  with Peters and NZ First. So when it suited English, he was more than willing to point to “the other parties” to validate his refusal to release National’s own coalition discussion papers.

TAME: “So are you prepared to release what your coalition negotiations with NZ First if the government does the same?”

ENGLISH: “Well, look, I don’t know if it’s a record of negotiations. We conducted ours under a confidentiality agreement. That was very clear right at the start.“

We asked @RtHonBEnglish if he'd release National's coalition negotiation paperwork, if Labour does the same. https://t.co/HoW21H8s1z via @1NewsNZ

Kudos to Jack Tame for being the only journalist (to my knowledge) to recognise and point out English’s double standard on this issue.

English’s refusal to come clean with the New Zealand public whilst demanding “transparency and openess” from Labour is a stark reminder of National’s toxic track record of paranoia, secrecy, and do-as-I-say-not-as-I-do arrogance. Every time English or one of his National Party parliamentary colleagues opens their mouths, we are reminded of their own hypocrisy.

They are political charlatans not to be trusted.

For the first time in our political history, it has become the role of the Government to hold the Opposition to account.

Introducing the first (but not the last!) Paula Bennett Award for Hypocrisy. Named for the National party politician who used the Training Incentive Allowance to gain a free, tax-payer funded university education when she was a young mother on the domestic purposes benefit. Later, in 2009, as Minister for Social Welfare, one of her first actions was to  scrap that Allowance, thereby denying other solo-parents the same opportunity for advancing their lives.

The first Award goes to Bill English, for saying one thing and doing another. Congratulations, Mr English! 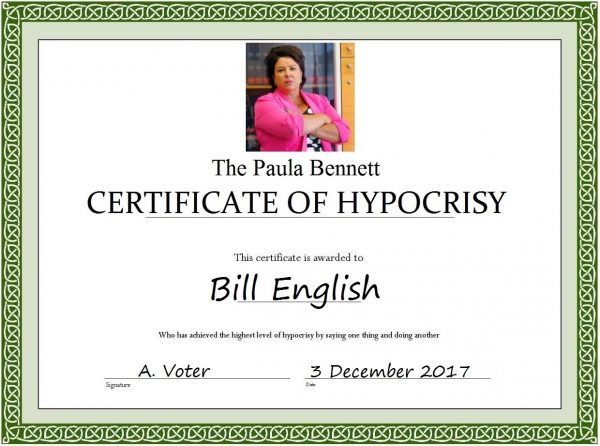 My thanks to a Radio NZ producer for locating specific audio that provided much-needed information for the completion of this story. I am indebted for the significant time and effort it took to assist me on this project.

Radio NZ:  New govt has ‘no follow through’ – National

NZ Herald:  NZ slips out of top 10 for freedom in the media

The Standard:  Key and Mass Surveillance – Was this the reason for the Golriz distraction?

TDB:  Now we know Key lied about mass surveillance – let’s remind everyone what our msm said at the time

National whines about Cullen’s appointment – they should know about cronyism

National’s $11.7 billion hole is right where they left it