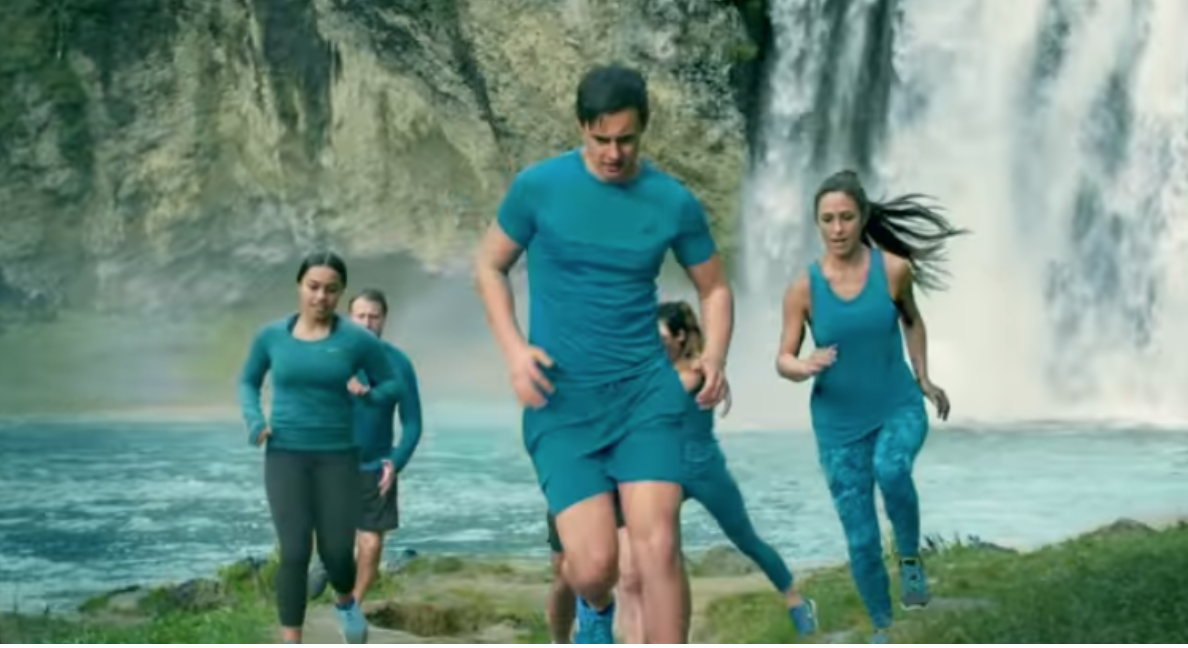 Nearly everyone has seen National’s “running ad” – a variation on last election’s rowing-boat advertisement – but without the plagiarised and illegal use of an artist’s music.

The full advert can be seen here, on Youtube.

The messaging is fairly uncomplicated and straight-forward; the blue (actually, more like teal) team is a metaphor for National running together as a team, whilst other “joggers” – representing Labour, Greens, and NZ First – are limping along. It’s about as subtle as burning a cross on a Black American’s front lawn.

But, take another, closer look as the Teal Team does it’s cross-country running…

First, the obligatory Clean and Green and 100% Pure message;

With not a hint of  cows defaecating in the background creating polluted, unswimmable waterways;

Yup. New Zealand as we imagine it in our fantasies.

It becomes pretty clear though, that National is strong on presenting an image – an Aryan image;

With the brown folk somewhere in the background, and very bloody happy with their lot in life;

The jog takes them along a deserted country highway. By now the “jog” is beginning to look very much like inmates from one of  National’s boot-camps, enduring a  forced run;

Back to wide-open scenery – as the runners jog across a dammed river or lake;

Is this really National’s vision of an unspoiled, 100% “Pure” countryside – with a dam across it?

But here is where it really starts to get creepy with an unintended subliminal message beamed out to every household in the country. The Teal Team approach runners from a mixed Red (Labour), Black (NZ First) and Green (ditto) team. The other Team are clearly struggling;

The Teal Team run past;

As they do, the Mixed Team begin to  stumble;

The Mixed Team stumble and collapse, falling to the ground;

And down they go;

The Teal Team seem apparently (?) oblivious to the situation and continue to run on;

So the “message” from this advert is that National will readily ignore other people in obvious distress and carry on their merry way?

The subliminal theme presented by the Teal Team is one of callous indifference.

This may not have been National’s intended message. But it sure ties in with child poverty, homelessness, income inequality, and other dire social problems ignored by National. Not  until the media spotlight is focused sharply on the plight of families living in garages, cars, or tents, does National react.

The focus groups presented with this advert clearly didn’t understand the subconscious meaning  within these images when they gave it their ‘thumbs up’. Or maybe they did – but just didn’t care.

As at 1 September, the National Party runners ad scored 570 ‘Dislikes’ as opposed to 173 ‘Likes’.

On Youtube at least,  the Nats have already lost the election.

The Real Green ‘Jogger’ who tried

The doom of Metiria Turei  was well and truly sealed when the Establishment Media (aka, Media Elite) and assorted right-wing bloggers and commentators ripped her reputation to shreds like a pack of blood-crazed pit-bulls in a feeding-frenzy.

Some of the public understood her situation.

Many did not. The conservative public passed judgement on Ms Turei because, well, passing judgement on someone elses’ perceived moral ‘lapses’  makes the Judger feel so much better about him/herself.

Ms Turei’s sacrifice appears to have struck a chord with a significant number of  people;

The Dominion Post, however, barely reported the story in a meaningful way;

Former Greens co-leader Metiria Turei has received the most nominations for the 2018 New Zealander of the Year Awards so far.

Support for Turei increased after her resignation following her admission she’d lied to Work and Income to receive higher benefit payments in the 1990s, the awards organisation said.

The nominee with the second highest number of nominations is the Australian deputy prime minister, Barnaby Joyce – although his eligibility to win won’t be assessed until nominations have closed.

Joyce was recently revealed to be a New Zealand citizen because his father was born here. The revelation came during a spate of Australian senators having to step down after checking laws preventing them holding dual citizenship while in office. Since then, Joyce has renounced is New Zealand citizenship. Stuff has contacted Joyce’s office for comment.

The NZ Herald  barely mentioned the fact  that Ms Turei was leading nominations with it’s story;

Despite Turei’s fall from grace after she publicly admitted she lied to Winz about her living circumstances in the 1990s she has received the most nominations.

In an act of casual minimisation, both papers made sure their stories did not reflect any degree of public support for the former Green Party co-leader.

One thing seems  clear – there is an under-current of support for Metiria Turei.

Anyone wanting to add their voice to nominate Ms Turei can do so on the New Zealander of the Year website.

Fran O’Sullivan… takes a jump to the Left

Following on from several political parties expressing varying degrees of a gradual move back to state-funded tertiary education, Fran O’Sullivan – the doyen of the Right and nominally an “impartial” journalist writing for the NZ Herald appeared on TVNZ’s Q+A on 27 August as one of it’s regular panellists.

She had this to say about sales of land and property to off-shore investor/speculators; land-banking in Auckland, and current policies that drove house-prices, gifting a tax-free gain for speculators;

“… when he [Phil Twyford] talked about property speculators, what and how […] what exactly are you going to do there? Are you going to bring in place capital gains taxes? Because I say that because right now, including our government officials, we’re being marketed internationally as a hot place for property investment. No capital gains tax. No stamp duty.

In China and elsewhere, the people coming out of the US buying the big stations, that sort of thing. This is a global property play we’re in and we’re being marketed as a very good place for that. We need to have a much more holistic view I think than what we got today.”

“Well I was actually quite stunned that people are talking in the range of $500,000 to $600,000. For first home owners I think that’s quite ridiculous. I think it needs to come down further.

I think there needs to be very large state intervention on the land bankers. Just to free up is not enough, I think they’ve got to take a haircut […] what happened to people after the war, farms were sold at fixed prices so people could come back in. We have a national crisis and I think, you know, speculating, and land.”

A pro-National, ostensibly pro-free market commentator loudly voicing support for seizure of privately held land?  Make no mistake, this is heresy against the supreme core neo-liberal tenet of the supremacy of individual land-owning “rights”.

What Ms O’Sullivan was advocating is a giant leap to the Left.

In effect, private land ownership has not only failed to deliver affordable homes to young New Zealanders – but is actually an impediment. Our aspirations for families to own their own homes has been confounded by unfettered capitalistic greed.

Ms O’Sullivan appears to have experienced a Road-To-Damascus conversion that neo-liberalism is not the answer. Like any inflexible, dogmatic ideology, it is part of the problem.

She joins former National PM, Jim Bolger in his own personal discovery that the neo-liberal so-called “reforms” he over-saw in the 1990s are a failure;

On 18 August, our putative “Environment’ Minister, Nick Smith, voiced his concerns that New Zealand-based company, Rocket Labs, may be impacting environmentally on our ocean floor. The concerns were that debris from rocket launches from Mahia Peninsula in Hawke’s Bay could be harming the ocean floor;

“The preliminary work indicates the environmental effects are small, but after 100 launches we may want to have a fresh look as to what is the future regulatory regime beyond that.

By the time we have had 100 lots of debris hit the ocean, fall to the seabed, we will have a better idea [of the environmental impact].

Right now we are not able to get advice on exactly how much of the jettisoned material will actually make it to sea level, or whether it will burn up prior to hitting the ocean.

When we have that information we will be able to refine the regulatory regime.”

Meanwhile, National  has permitted granting of a consent to Trans-Tasman Resources  to mine 50 million tonnes of iron ore sand off the coast of south Taranaki each year, every year, for the next 35 years.

The process would involve mining;

“…50 million tonnes of sand from the seabed off the coast of Patea in South Taranaki, extract the iron ore from it using a giant magnet, and then put 44 million tonnes back”

The damage to ocean life in the surrounding sea and ocean floor cannot even be imagined. The zone of mining would most likely become a dead-zone – uninhabitable.

Unbelievably, consent was given by the so-called Environmental Protection Agency, despite receiving 13,417 submissions demanding that Trans-Tasman Resources’  application to be declined – and only 147 submissions in support.

Meanwhile the Ministry for the Environment has determined that any impact by Rocket Labs on the seafloor would be minimal;

“Overall, our view is that the risks to the environment and existing interests from jettisoned material falling into the EEZ are low and that the development of a space vehicle launch industry will have significant economic benefits for New Zealand, at a national and regional level.”

One has to wonder where Nick Smith’s priorities lie?

At the bottom of the ocean floor, by the looks of things.

Dominion Post:  Metiria Turei has most nominations for 2018 New Zealander of the Year

New Zealander of the Year:  Nominate

Fairfax media:  The 9th floor – Jim Bolger says neoliberalism has failed NZ and it’s time to give unions the power back

Mediaworks:  Trans-Tasman Resources gets consent to mine iron ore sand off south Taranaki

Manawatu Standard:  Call for moratorium on all seabed mining amid ‘secretive’ application