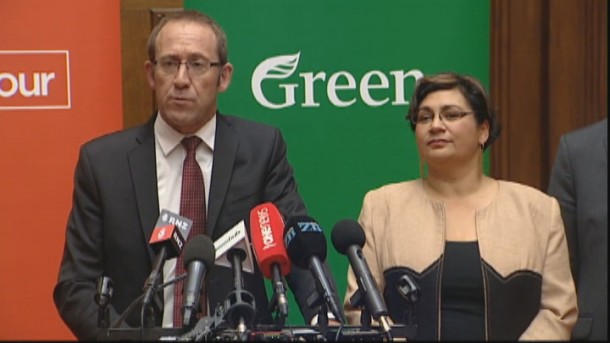 Last week’s memorandum of understanding between the Labour and Green Parties will prove to be a wise move if it helps the combined Labour-Green vote to reach 48% or more. It seems a hard ask though, even in the event that the economy tanks next year.

In 1931, after the economy tanked big-time late in 1930, a conservative government nevertheless was returned; it took five years of the Great Depression for voters to dislodge the conservatives (who had been in power for 23 years from 1912 to 1935). Even in 1935, it was disunity on the right that handed victory to Labour, with the new right-wing Democrat Party splintering the vote as a protest against Finance Minister Gordon Coates’ centrist pragmatism.

There is a tendency – in both New Zealand and in the United Kingdom – for voters to turn against parties which allegedly “prop-up” bigger parties. In New Zealand the Maori Party – which has never propped-up National – has suffered nevertheless because of the prop-up taint. (The Maori Party has always joined a government to make a difference, to make that government a better government than it otherwise would have been; it has never played a clinching role in the formation of a government. It has never been the median party, despite having been close in 2008, 2011 and 2014.) Pity the Liberal Democrats in the United Kingdom, who had no real choice in 2010 but to form a government with the Conservatives. As a result, Lib‑Dem voters turned on their party, directly causing their worst nightmare, the coalition government to be replaced by a Tory-only government. They just didn’t get the maths.

In New Zealand in 2011-14 and from 2015 (after Northland), puny United-Future has been the median (“king-maker”) party. In 2017 the odds are that, under the present configuration of parties, either New Zealand First or the Maori Party will be the median Party. The politics of 2017 will become very interesting if Green-Labour-Maori have enough seats to put together a government. (Indeed the most effective possible electoral accommodation Labour could do might be to campaign for the party vote only in the Maori electorates.)

Unlike the Greens, the Maori Party have a strategy of being a part of government, whether centre-left or centre-right. At risk of being misunderstood, they are a party of Government, not a party of Opposition. (Indeed I voted Maori last time with the very specific aim of helping to elect a Maori Party list MP; I take my share of the credit for bringing Marama Fox into Parliament.) I would rate it about a 25 percent chance that we get a Green-Red-Brown government next year.

If the Green-Labour bloc cannot get a majority in Parliament with the help of the Maori Party, then Green-Labour will need the Black party; Winston Peters’ New Zealand First. The issue becomes what Winston will ask for, and what Green-Labour is willing to concede. In 2005 Labour conceded to Winston by sidelining the Greens who had positioned themselves into a position of strategic weakness, agreeing unconditionally to support Labour on confidence and supply.

A repeat of 2005 seems a very likely possibility in 2017. And, if Green-Labour does not make sufficient concessions to Winston, then a repeat of 1996 becomes the next most likely outcome. Either way, Winston Peters will probably press very hard to become Treasurer or Prime Minister. (Actually, when he was Treasurer, he was for the most part a very good Treasurer.)

If the election makes New Zealand First the median party regardless of whether the Maori Party positions itself to the left or to the right of New Zealand First, then there will be only one way to break a 1996-style impasse (I am assuming that Red-Brown-Black could not make it to 50%). It would be for Green to reposition itself into the median position; to redefine itself as a strategic centre Party. It could be quite a messy divorce from Labour, and with the risk of a 2020 anti-Green backlash (like the anti-Lib-Dem backlash in the United Kingdom).The possible outcome would be a Green-Blue government, which many people – including National Party people – may prefer over a Black-Blue government.

I want to see the Green Party spelling out what it would do in the event that the party vote split is similar to that of 1996; quite a likely possibility. The Greens should make it clear that, if at all possible, they will form a governing partnership with Labour (and hopefully, Maori) after the 2017 election. That would be Plan A. They should make it equally clear that, if such a government is not possible, then they will commit to contesting the centre ground, meaning that a Green-National government becomes a possibility. If the Greens explain this ‘Plan B’ properly, they will minimise the ‘messy-divorce’ version of Plan B; facilitating a strategic amical divorce instead.

While unconditional love may underpin a good marriage, it makes for weak politics.