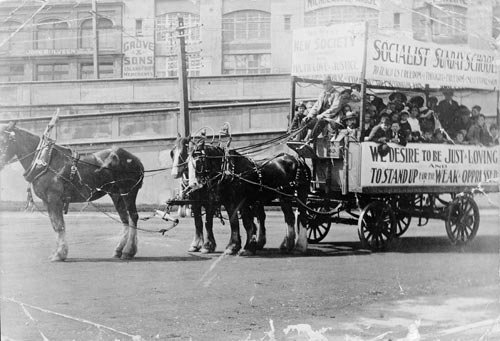 There is much that could be said about the Future of Work and the Labour Party’s rather insipid response to the challenge it has set for itself.

Here I’ll restrict myself to rebuking the lack of historical context around the current conversations about work; murmurings that fall well short of a debate. At the Labour Conference of March 23-24, I was alarmed by initial statements suggesting that an exogenous technological revolution, on a scale that is a degree of magnitude more than anything the world has ever seen before, is in its incipient stages; and will inevitably transform the world economy into something we can barely imagine.

I don’t think anything can beat the extent of change witnessed by my maternal grandfather Ernest (1884 to 1969). Wikipedia dates the invention of the automobile at 1886. Electric lighting and the telephone and the bicycle also started to transform our lives in that decade. The Wright Brothers flew their first aeroplane on Ernest’s 19th birthday. Television was first patented by Boris Rosing at St Petersburg in 1907. These last two inventions really transformed our lives in the 1960s.

In the months before my grandfather died, the Concorde supersonic airliner and the Boeing 747 first flew. Apollo 9 flew in the test flight of the Lunar Module the month before he died. The first moon landing took place that same year. From horse and buggy to supersonic passenger flight and to the moon. Can the next 84 years – to 2100 – be as dramatic? Yes, maybe dramatic, but possibly more like something from the Book of Malthus than from the Book of Jobs. (We know how to avert Malthusian calamity, but probably do not have the wisdom, collectively, to embrace that knowledge.)

The inventions in the decades before World War 1 led to economic transformation in the 1920s and 1930s, especially in the years from 1926 when the problems of inequality and inadequate aggregate demand created a destructively competitive economic environment, when cost-cutting became imperative and capital displaced labour as part of that process. That transformation – from 1926 to 1936 – turned out to be a mix of bad and good. One of the good bits was enhanced knowledge about how economies actually work (and don’t work); knowledge largely ignored today.

It was on the farm that the problems first became apparent. Falling global prices of agricultural commodities led to economic crises in New Zealand in 1927 (compounded by the British general strike of 1926), and then in all other countries and regions whose economies were based on the export of food and fibre. Mortgaged farmers responded by trying to produce even more, despite lower prices. They cut their costs by both over-burdening the land, and by continuing to substitute capital for labour.

In New Zealand the 1920s was the first boom-bust of dairy. More dairy farms failed in 1927 than any other year. The youth of the New Zealand countryside migrated en masse to the main urban centres, due both to technological redundancy on the farm, and to farm bankruptcies. New Zealand’s urban economies initially grew rapidly under the impulse of cheap young labour.

Unemployment in New Zealand had clearly expanded rapidly, but was not measured in any meaningful way. There was no shortage of commentary in 1928 though, an election year. Things got a little better in New Zealand in 1928 after its 1927 annus horribilis; not enough, however, to save the government from electoral defeat. In the meantime, across the Tasman Sea the economic crisis had escalated in 1928. An unusually large number (for that decade) of Australians came to New Zealand looking for work. Thus, the two big issues of that election year were trans-Tasman migration and technological unemployment.

In the rest of the capitalist world, ten years after World War 1, the issues were much the same. The United States’ farmers were damaging their land big time, creating the preconditions for the dustbowl of the 1930s. Factory productivity increased substantially in the 1920s, with Taylorist mass production, and a whole new range of consumer goods being produced for workers whose wages were not reflecting those productivity gains. To complete the scene, 1928 was a year of property and equity bubbles. Inequality was booming just when the economy needed well-paid workers willing and able to buy all the stuff coming off the production lines.

Something similar was happening in Germany in 1928, with massive high-productivity factories being built so that Germany could be a super-competitive exporter of then-modern manufactured goods. While exporting on a large scale was something Germany was required to do to meet the challenge of the war debts imposed upon it, Germany – since its imperial unification in 1871 – always saw itself as a ‘mercantilist’ or ‘ordoliberal’ exporting state.

Five years after 1928 the USA, Germany, Australia and New Zealand (and many others) were at the nadir of the global Great Depression. It wasn’t caused by adoption of new technology; rather that adoption was to a large extent a feature or symptom of a cost-cutting environment created by a huge deficiency of aggregate demand (spending) relative to the supply of industrial and agricultural products being offered for sale. And the crisis was a symptom of high and rising inequality. Inequality meant that the people who these ‘wage goods’ and services were being produced for – the masses – could not afford to buy them.

The capitalists responded by firing more workers, just as the capitalists more than ever needed the workers’ purchasing power. Consumer debt – especially in 1928 to 1930 – helped to delay the full impact of the crisis. But when the then global financial crisis really hit – in 1931 – only government debt could solve the problem. Thanks to the innate myopia of governments – even ‘progressive’ governments – governments did the very opposite of what was required of them; they mimicked the private sector and slashed their own spending. Those persons and organisations who would spend couldn’t; and those who could spend wouldn’t.

From the late 1920s, the labour force became increasingly casualised – in New Zealand and elsewhere – starting with the young. One frustration of doing research about the period is that, more than anything else, people wanted to know how many people were unemployed. They were posing the unemployment question with a 1970s’ mindset about the labour market. In New Zealand there was unemployment in the depression on as great a scale as in the other more industrialised capitalist countries, but not in a way that could be captured by late 20th century concepts of unemployment. In our 21st century terms, the early 1930s was a crisis of mass underemployment; highly precarious employment became ubiquitous.

In reality, almost everyone (male and female) aged above 15 was in the labour force in 1933; only the very rich could choose to not undertake income-gathering activities. Most would have taken work as employees if that were possible. The more common conditions were those of casual self-employment, and of short-time or short-term employment. New Zealand has much history of casual labour markets to draw on for insights about what (especially but not only) young people face in a world of rapid technological change. But most of us are completely ignorant of that history.

The other important outcome of these events was the transformation of economic thought, with the name of John Maynard Keynes to the fore. Keynes understood that the Great Depression was a problem of inadequate aggregate demand – especially demand for ‘wage goods’. He understood that the rapid uptake of new technology, new industrial methods, and new management systems was an essentially good thing – creating the possibility of a new era of abundance if we had the nous to grasp that opportunity. We did not. Keynes (who wrote ‘Economic Possibilities for our Grandchildren’ in 1928) in the 1930s became as concerned about the unemployment of machines (‘robots’ in our 2010s’ terminology) as he was about the unemployment of people. Further, Keynes showed how governments could be a big part of the solution to this unemployment problem, rather than being a big part of the problem.

I didn’t once hear the words ‘Keynes’ or ‘Keynesian’ at the Future of Work conference. The issues we face today were all apparent and widely discussed in the late 1920s. The debate in 1928 was equally off the mark. Then, as now, we responded to a crisis of inequality and environment by, as individuals, trying to be more ‘competitive’ and arguing about immigration. The glorification of competitiveness is – as Guy Standing noted on 23 March – central to today’s problem. It was equally central to the unease of 1928.