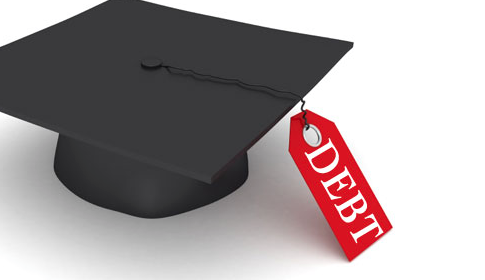 As reported in a previous blogpost last year (Steven Joyce – Hypocrite of the Week);

Fun Fact #3: Approximately 1.2 million people – roughly a quarter of the population –  have taken out  student loans.

Fun Fact #6: The student fees/debt system began in 1992. Prior to that, students  had access to Bursaries and Student Allowances and tuition fees were minimal.

Fun Fact #8: On 17 May 2013, National announced new legislation would give the IRD powers to arrest loan defaulters at “the border” (ie, airports) if they are “about to leave or attempt to leave New Zealand after returning from overseas”.

Sources: Ministry of Education, Beehive, NBR, and The Wireless

Prior to 1992, tertiary education at Universities was mostly free, with minimal course fees. On top of which, a student allowance plus part-time paid employment, was usually sufficient for students to graduate with minimal debt hanging over them.

This allowed graduates to start their adult lives, careers, and families with only as much debt as they chose to take on. This was usually in the form of a mortgage and business start-up costs (if they elected to be self-employed).

Those that earned more in a professional capacity, paid a higher rate of tax. This ensured that those who stood to gain the most, financially, from a near-free tertiary system, paid more in taxation. This – in part – assisted funding for future generations to move through the tertiary education system.

Those that did not achieve high income-brackets could contribute in other ways.

When National’s Ruth Richardson became Finance Minister in 1990, the social contract between generations “paying it forward” was broken. University fees were increased; student loans were made available to cover payment for increasing user-pays;

Ironically, Ruth Richardson herself was a beneficiary of New Zealand’s then near-free tertiary education system. In 1972, she graduated from the University of Canterbury with a Bachelor of Law  (Honours).  She immediately went to work – debt-free – for the NZ Department  of  Justice  (NZ).

She has made herself a Limited Liability Company, ostensibly to minimise her tax “liabilities”.  According to her website, her husband is General Manager of “Ruth Richardson Ltd”.

Though the tertiary education system was far from perfect – for example polytechnics could charge higher student fees – it offered near-free higher education and taxpayers were ultimately beneficiaries of a system that produced doctors, engineers, scientists, and other skilled professionals to take New Zealand into the 21st Century.

Even those who went overseas in pursuit of lucrative work gained valuable experience which benefited the country as a whole, upon their return.

Unfortunately, the social contract between generations was broken as the Lange-Douglas Labour Government implemented neo-liberal policies that included user-pays as a new concept upon which to base State/individual transactions.

Labour did not implement user-pays in tertiary education – but it laid the fertile ground for the following Bolger-Richardson National government to radically change University funding for course fees.

For the right-wing Labour (of the 1980s) and National, smaller government meant tax-cuts, and from 1986 there were no less than seven cuts to taxation;

Each cut to taxation has meant less revenue for the government and resulted in either reductions to social services, and/or increases in user-pays.

The ballooning of “voluntary” school fees to over a billion dollars since 2000 is the clearest example yet of  tax-cuts making way for the covert rise in user-pays for what is supposedly “free” schooling in this country.

The under-funding of schools and desperate need for parents’ “donations” has become such a pressing problem that Patrick Walsh, of the Principals Association of New Zealand,  has openly suggested that the ideal of  free education should be abandoned;

“I think the basic principle is you undertake a study … of what it costs to actually run a school, all the operational costs including staffing, and you either fund it to the level it actually costs, or you say the pie isn’t big enough to support that and we will now allow schools to charge parents for some of the services.”

Perhaps Walsh has a point. It would at least acknowledge the current semi-user-pays system as a reality, rather than fooling ourselves with dishonest and quaint notions of “school donations”.  Only then might New Zealanders clearly comprehend how we have arrived at a toxic mix of tax-cut bribes and implementation-by-stealth of user-pays in education, and other state services.

Education is not the only state service suffering from lack of adequate funding, as recent media reports from Canterbury and Waikato DHBs indicate. The increasing waiting times for public operations, and painful suffering of people with debilitating medical conditions,  is a telling indicator that our health care system is ailing through lack of funding.

Taxation has fallen – as have once-free services which New Zealanders took for granted. At the same time, population growth has put pressure on (reduced) government revenue and spending.

We are spending less, for more people, to meet expectations that are simply unrealistic after seven tax cuts.

Rather unsurprisingly, the consequences of successive tax-cuts have been predictable, and well-reported in the media;

According to the most recent data, taken from the 2013 Credit Suisse Global Wealth Databook, 44,000 Kiwis – who could comfortably fit into Eden Park with thousands of empty seats to spare – hold more wealth than three million New Zealanders. Put differently, this lists the share of wealth owned by the top one per cent of Kiwis as 25.1 per cent, meaning they control more than the bottom 70 per cent of the population.

New Zealand’s wealthiest individual, Graeme Hart, is ranked number 200 on the Forbes list of the world’s billionaires, with US$7 billion. That makes his net worth more than the bottom 30 per cent of New Zealanders, or 1.3 million people.

January 31st marked a giant step Kiwi-kind that – if endorsed by voters – could prove to be the the first nail-in-the-coffin for user-pays.

Labour leader, Andrew Little, announced a policy that, while seemingly radical in the 21st century, was common-place policy in this country pre-1980s.

“… that the next Labour government will invest in three years of free training and education after high school throughout a person’s life.

Three years of free skills training, of apprenticeships or higher education right across your working life.”

He then pointedly explained not just where the money would come from – but that bribes in the form of  successive tax-cuts had under-mined our once-proud cultural expectations of state-provided services;

“The money is there – the Government just has it earmarked for tax cuts. We will use that money instead to invest in New Zealand’s future.”

In effect, this would be a massive admission of failure in user-pays, and the beginning of rolling back thirty years of New Right doctrine.

The Neo-Libs Strike Back

The response of the National Party and it’s front-organisation, the so-called “Taxpayers’ Union“, has been utterly predictable.

Judging by the angry responses on Joyce’s Twitter account, his comments were more provocative and self-defeating, than achieving any ‘hits’ on Labour’s policy-announcement.

John Key fared little better after his jaw-dropping gaffe on this issue;

Aside from the usual tactic of playing on low-paid workers’ dire plight to criticise free education (or free anything provided by the State), links were quickly drawn to Key’s on-going assault on waitress Amanda Bailey, in Auckland’s Rosie Cafe;

Prime Minister John Key has drawn a barrage of criticism after questioning if Labour’s fee free study policy was fair on waitresses who would be paying tax to subsidise students.

His comments also drew a quick response from some critics on social media who drew the link with Key’s repeated pulling of Auckland cafe waitress Amanda Bailey’s ponytail.

“How much should the waitress.. how much of her taxes should go to a student who will absolutely earn a lot more?”

The question could equally be put;

“How much should the waitress.. how much of her taxes should go to…”;

But the main question should be;

“How much should the waitress.. how much of her taxes should go to paying for tax-cuts for the top 1% of  New Zealanders.”

When National cut taxes for high-income earners in 2010, and raised GST from 12.5% to 15%, this was essentially a transfer of wealth from low-income earners to the uber-wealthy. Low income earners pay disproportionately more in GST than the wealthy.

People like Ruth Richardson can structure their tax-affairs by registering as a limited liability company (or using Trusts and other accounting trickery) – which allows her to claim back on GST – this puts the rest of us at a distinct disadvantage.

As for criticisms from the so-called “Taxpayers Union” – this is a front-organisation for National. It’s organisers are party apparatchiks from National and ACT;

Jordan Williams is closely connected to the likes of David Farrar, Cameron Slater, and Simon Lusk – all of whom are hard-Right National/ACT supporters and apparatchiks.

Right-wing blogger, David Farrar, is one of the  Board members of the Taxpayers Union. He has been a member of the National Party since 1986, as his candid Disclosure Statement on Kiwiblog reveals.

Publishing criticisms from the “Taxpayers Union” is simply another PR statement from National, masquerading as independent analysis.

Both men were recipients of free, tax-payer-funded, University education.

Has Key re-paid any of his University education? One suspects the answer is a firm “no”.

And with seven tax cuts, neither did he pay for it with taxation, as high-income earners paid less and less since 1986 – five years before graduating.

In Joyce’s case, as first reported on 6 August 2015, in a previous blogpost;

Joyce completed his University studies and gained his degree eight years before the Bolger-led National government introduced student fees/debt in 1992.

One wonders how Joyce reconciles his free tertiary education – as well as benefiting from seven tax-cuts, along with John Key – with justifying National’s  issuing warrants-to-arrest for loans defaulters;

“Just because people have left New Zealand it doesn’t mean they can leave behind their debt.  The New Zealand taxpayer helped to fund their education and they have an obligation to repay it so the scheme can continue to support future generations of students.”

Key and Joyce never paid for their free University tuition.

Yet they expect other New Zealanders who followed in their foot-steps to pay for theirs.

What does it say about us as a nation, when we elect hypocrites as our elected representatives, who bludge of the tax-payer?

If this does not fly in the face of New Zealanders’ values of fairness and giving everyone a fair go – then we are not the same people we once were.

Can we take it from the Tertiary Education Minister that his own university education “achieved absolutely nothing”?

The Wireless: Getting by on a student budget

Teara.govt.nz: National Party – The ‘mother of all budgets’

NZ Herald: GST rise will hurt poor the most

The Daily Blog: John Key said WHAT about waitresses’???

The Daily Blog: Why does Steven Joyce hate education so much?

Shafting our own children’s future? Hell yeah, why not!

Budget 2013: How NOT to deal with Student loan defaulters

Anne Tolley’s psycopathy – public for all to see

Letter to the Editor: Steven Joyce – Hypocrite of the Year

This blogpost was first published on The Daily Blog on day month year.