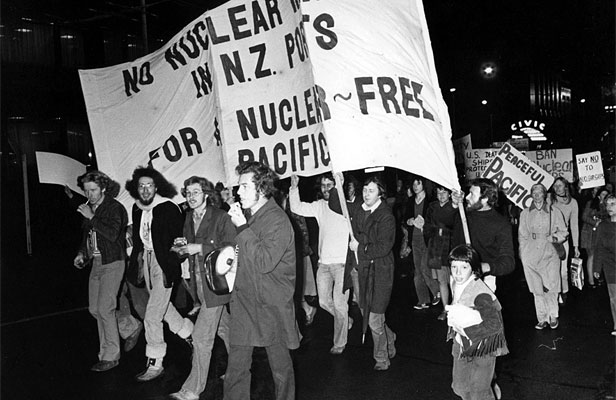 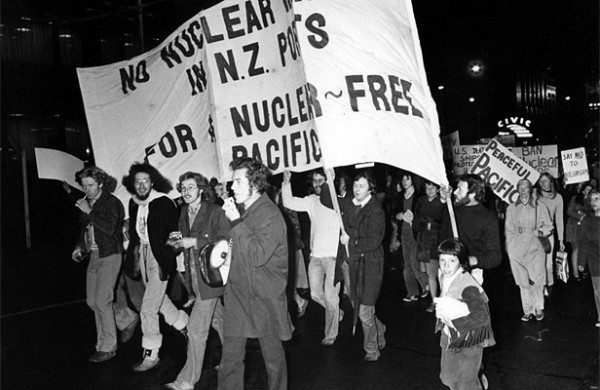 Politicians, journalists and commentators who cannot understand why the TPPA marks the end of bipartisan support for similar international commerce agreements have missed the crucial point.

This is a nuclear-free moment in New Zealand’s history. It is a turning point. When New Zealand went nuclear-free in the 1980s with huge public support, it broke a previously bipartisan policy towards the US. The forces resisting change took to scaremongering to try to turn back the tide.

David Lange wrote in his memoirs: “The sum of the advice I received from the ministry … was that pursuing our nuclear-free policy would lead to a breakdown in New Zealand’s relationship with the United States… It could have severe economic consequences if the United States took action against New Zealand’s trade.” This echoed the blustering of opposing political and business leaders.

What did happen? Relationships changed. But the net damage was ruffled feathers. Instead it was ‘nuclear-free’ that became bipartisan policy because it made sense for New Zealand in a changed world.

That is how we should see this TPPA moment. All opposition political parties plus the Māori Party now firmly oppose it, along with a broad spectrum of society.

The TPPA is an agreement from the 20th century, not one for the 21st. It attempts to entrench the free-market trickle-down policies of the 1980s and 1990s. That is why conservative parties support it. It prevents future elected governments from making progressive change.

This is symbolised by National entrenching in the TPPA its policy of allowing investors from any country to buy our houses, no matter how much it pushes up prices. It has embedded its own government procurement policy. And so on.

These are the remnants of ideology from New Zealand in the 1980s and 1990s, Reaganism in the US and Thatcherism in the U.K. Agreements like the TPPA continue them when electors and international experience have rejected them. They ignore the most important issues of today.

These policies favoured the rich at the expense of the majority, creating a huge increase in inequality. Inequality is one of the top issues concerning people in New Zealand and internationally. Yet the TPPA is likely to increase income inequality according to at least one economic evaluation. It will increase inequality of power through provisions that allow overseas investors to sue governments for huge sums in unaccountable offshore tribunals of corporate lawyers if their profits are threatened.

The free-market policies directly led to the Global Financial Crisis that began in 2008 at enormous cost to the great majority of people. It was the latest and largest of a series of similar crises. Yet the TPPA does not help in the uncompleted task of reining in the banks and the rest of the financial sector. Worse, it removes tools that would enable governments to control the international movement of capital which rapidly spread the crisis. It continues an obsession with liberalising the financial sector, entrenching its ability to create “toxic” products and spread them across borders.

Does it deal with the biggest question of our time: climate change? No – it is unmentioned, and the ability the TPPA provides for corporations to sue governments could undermine actions against climate change. The environment chapter, experts are clear, is ineffectual window-dressing – as is the other nod to public concerns, the labour chapter.

And what is the pay-off? According to the study commissioned by the government itself, it is an increase of less than one percent of GDP in 15 years time: 0.9 percent. Even this tiny amount is strongly contested by economists. A few may well get most of it, increasing inequality.

Proponents will claim unquantifiable gains from greater international competition, increasing productivity. New Zealand’s recent history is not kind to that argument. Others (including Rod Oram and myself) will say it will just intensify our reliance on low-value commodities. The bottom line is that it embeds a theory of economic development which we have great cause to worry does not work.

Against concerns that the TPPA will cost sovereignty, the commentators protest that New Zealand lost sovereignty in previous agreements such as the WTO and with China. Why should we worry about losing more sovereignty now?

At what point do we say: no more? Because the end point is a central government with little more power than a town council.

This is a turning point in New Zealand’s history. The old guard complain it is not like we used to do it. But New Zealanders wisely learned the nuclear lessons leading up to the 1980s. All that we have learned since the 1980s leads to the stand that increasing numbers of citizens in New Zealand and other countries are taking on the TPPA and its like.

The TPPA is the wrong path to take for a fair, sustainable, secure and prosperous future.

Dr Bill Rosenberg is the CTU Economist and Policy Director