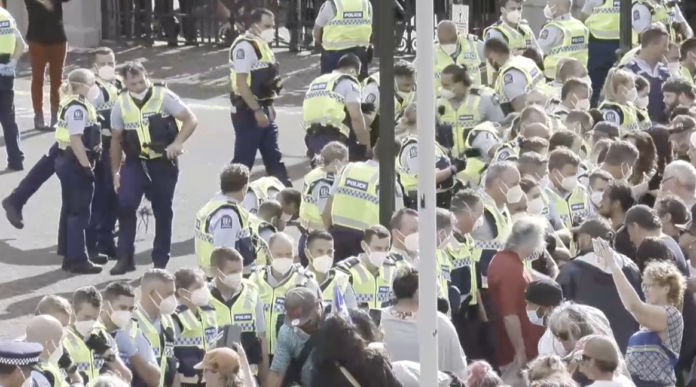 So far there are a range of opinions on TDB about the Convoy occupation of Parliament Grounds. Chris Trotter calls for the police to remove the protestors. John Minto sees this as a revolt of workers fed up with neoliberalism and the failure of their political leadership. Bomber is sort of neutral tolerating the ‘clowns’ and against using the cops to recruit more ‘clowns’. Somewhere in all this the distinction between the petty bourgeois leadership and the ugly mob is lost.

Let’s go further. This is an ugly mob that demands their individual rights without reference to the rights of others. But clearly the mob is one of mainly workers who are the victim of decades of antiworker attacks. But what Bomber sees as ‘clowns’ is a populist mob hyped up by fascist demagogues into a confused and distorted expression of the class struggle.

The struggle that is represented by the Convoy on the Parliamentary lawn is not about the use of violence, or whether most of the mob are workers. It is about how an international fascist movement is using declassed workers as fascist fodder to win state power to launch systematic fascist state violence against the working class.

Appearances are always deceiving. There is much more to the Convoy than a legitimate protest of angry workers. It is the creation of the international rightwing project of Bannon and Trump for a white supremacist fascist movement. The NZ Convoy is part of a global plan to save the white European world from the rising flood the poor black and brown masses.

So it is not a question of the mob vs the capitalist state. They are part of the same problem which is how to monopolize state violence to smash the working class. Fascists are not against the capitalist state, they want to control it. They want to remove the ‘communist’ Jacinda just like the January 6th attempt by a populist mob to force the US Congress to give Trump the election victory over the ‘liberal’ Biden.  Fascism is a long story.

Fascism is the last ditch attempt by the capitalist class to hold onto power in the face of rising mass resistance against its destruction of society to hang onto its wealth. The effect of this destruction is the collapse of all the gains that workers have won over generations. Many millions of working people are thrown out of work into poverty. Having nothing to lose, their potential power to overthrow capitalism becomes a revolutionary threat. ‘Potential’ because that threat has first to be organised before it can be realised.

So while globally workers can unite to overthrow capitalism with strikes and occupations halting the production process, workers are divided as a class by income, nationality, religion, race and gender. Identity politics is one result which erases class identity, ‘declassing’ workers as bourgeois individuals in the dog eat dog market. Unless workers are united and mobilised against the ruling class and its state, the class enemy will make use of these divisions and recruit workers as fascist fodder to smash those workers who so retain their class solidarity and consciousness.

Since WW2 capitalism has undergone a long structural crisis of falling profits where the share of value produced going to workers has shrunk relative to the share of profits. Increasing labour productivity has casualised labour, weakened if not destroyed trades unions and thrown many workers into self-employment. The declassing of workers sees social democracy move right into the liberal center, and those left behind become prey to populist demagogues who recruit them as fascist fodder against organised labour.

The  upshot is what we have today. Capitalism facing terminal crisis, layers of workers declassed and turned into fascist fodder, prey to petty bourgeois ‘leaders’ who blame the crisis on the working class, and any govt that is labelled ‘socialist’ or ‘communist’ even ‘liberal’ targeted by a populist mob to get fascist leaders in power.

Once an ‘event’ such as the occupation of Parliament grounds by Convoy is understood in terms of the class struggle, the task of revolutionary socialists is clear – build a workers’ antifascist movement!

Fight all attacks on workers on the streets, expose and discredit the bourgeois funders of fascism like Bannon and Trump, ridicule the puffed up petty bourgeois leaders like Eftpostle and Demented who want to bring down the Labour Government.

Because the ruling class is preparing an international fascist movement to take state power, we have to defend bourgeois democracy. But only as a means to advancing the struggle, not as an dead end. We never appeal to the bosses’ state to defend our rights.

We do it by class struggle methods. We show how parliamentary democracy is a sham. That the ‘human rights’ demands of the populists are a delusion. Only a workers’ state can deliver ‘democracy’ and ‘freedom’ from exploitation and oppression.

So once the socialist left has got its arse into gear, builds independent fighting anti-fascist militias to dispense with fascism, we have to move on to the task of smashing the capitalist state and replacing it with a workers’ state.