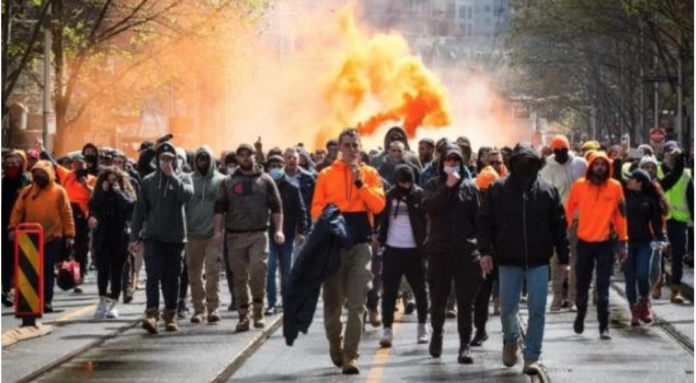 THE LAST PLACE a young, well-educated, socially-liberal, mask-wearing Melburnian should be found today (22/9/21) is on the streets of downtown Melbourne. All morning, squads of increasingly angry and frustrated riot police have been clashing with groups of even angrier and more frustrated young men – most of them construction workers – protesting furiously against mandatory Covid-19 vaccination, and Labor Premier of Victoria Daniel Andrews’ decision to shut down Melbourne’s construction sites for a further two weeks. Anyone looking like a supporter of mandatory vaccination, Andrews, or even the “sell out” CFMEU – the construction workers’ union – who fell into these protesters’ hands, would be in for a very hard time indeed.

It is most unlikely that Andrews and his advisers anticipated the explosion of anger that has followed their decision to make vaccination mandatory for construction workers. Pandemic decision-making is driven by the data – which showed a very low vaccination rate among this group of workers. Superficially, their reasoning was sound. By making the jab mandatory, unvaccinated tradies, desperate to get back to work, would be quick to comply. Where was the advantage in resistance?

Unfortunately, reason had nothing to do with it.

In the minds of an alarming number of the young, fit, Aussie males who dominate the Victorian construction industry, the so-called “Covid-19 Pandemic” is a crock of shit: nothing but a smokescreen laid down by the “elites”, whose unholy intention has always been to crush the spirit of hard-working working-class men by robbing them of their freedom. Why else did these high-viz demonstrators make a bee-line for the CFMEU’s headquarters as the protests kicked-off? Because if there’s one institution guaranteed to stand up for a working man’s freedom, then it’s his union. Right?

The CFMEU bosses, also acting reasonably, wanted to get their guys back to work as soon as possible. The building sites had been far too quiet for far too long. The members were running out of money. If the price of getting the construction industry up-and-running again was not objecting to a compulsory jab for all the lazy bastards who’d failed to get one during the weeks of lockdown, then the CFMEU would keep its mouth firmly shut. After all, which freedom was more important? The freedom to be a bloody idiot? Or, the freedom to get out and get earning again? It shouldn’t have been that hard a choice to make!

And by the time the union bosses realised that way more blokes than they ever expected were not only refusing to get jabbed, but also blaming the union for not defending their right to say No, it was too late. There were hundreds of them right outside their front door. In vain did they demand the right to be heard. These anti-vaxx unionists were in no mood for explanations. First they hurled insults, then bottles, then rocks. Pretty soon all the CFMEU officials could hear was the chant every union boss dreads: “You sold us out! You sold us out! You sold us out!”

Sensibly, they retreated. This was something for the cops to sort out.

Well, yeah, usually. But these guys are very different from the middle-class sons and daughters that Melbourne’s finest are usually called upon to police during protests. Very few of those kids are willing to mix it up with the coppers – even if they were capable of such non-verbal communication. Young construction workers on the other hand: blokes who know how to handle themselves; they are a whole different story. What’s more, they’re Australians. Mixing it up with the coppers is as old as Ned Kelly – and practically an obligation. No red-blooded, working-class Aussie is going to run away from the Police – until the shooting starts.

And that’s the problem – isn’t it? The last thing Premier Andrews needs right now are half-a-dozen young construction workers bleeding-out on Flinders Street. What’s more, the protesters know it. The Riot Squad can squirt all the pepper spray, and fire all the rubber bullets it likes but, so long as their numbers hold-up, these protesters ain’t going anywhere. Hell, they’ve even drawn up a batshit crazy list of demands – just like the miners at the Eureka Stockade. And if the cops actually do start shooting? Well, who’s for an irrational revolution?

So, where the bloody hell does that leave the political leadership of Victoria and Australia? Where has all this batshit craziness come from? Best guess? It’s come from nearly forty years of working-class blokes being looked straight through – as if they weren’t there. It’s been born out of the yawning chasm between the people who get the respectful nods, and the people on the receiving end of the contemptuous sneers. Between the classy types who talk knowledgably about good wine and boutique breweries, and the guys who drink the same brand of beer as their dads’. If you shove a whole class out of sight, and make it crystal clear that nobody who matters gives a rat’s arse what they think about anything, then winning their trust when it really, really matters, is bound to be a struggle.

After all, the bosses have been telling them for forty years that all these bad things that keep happening to them cannot be helped. Yes they may be painful, but they are also necessary. And besides, there are no alternatives. That was shit forty years ago, and it’s still shit. So, when the working-class hears the people in charge spewing out the same old rhetoric about painful but necessary adjustments – for the good of all – is it any wonder that the first response of a fair old chunk of them is scepticism?

Especially when there are YouTube videos and Facebook posts telling them that this whole Covid thing is a hoax – just another trick by billionaire vampires to deprive them of what little freedom they have left.

Especially when the “nice” people get to work from home on full pay, while the gates to the city’s building sites remain firmly padlocked.

Are all these protesting construction workers right, then? No, of course not. Covid-19 is not a figment of Daniel Andrews’ imagination. Neither can one help speculating, just a little that, mixed-in with all this working-class fury, there might also be a pretty large dose of toxic Aussie masculinity. What is absolutely indisputable, however, is that the ignorance and aggression on display on the streets of Melbourne has not materialised overnight, out of thin air.

As W.H. Auden wrote on the eve of the Second World War:

I and the public know
What all schoolchildren learn,
Those to whom evil is done
Do evil in return.