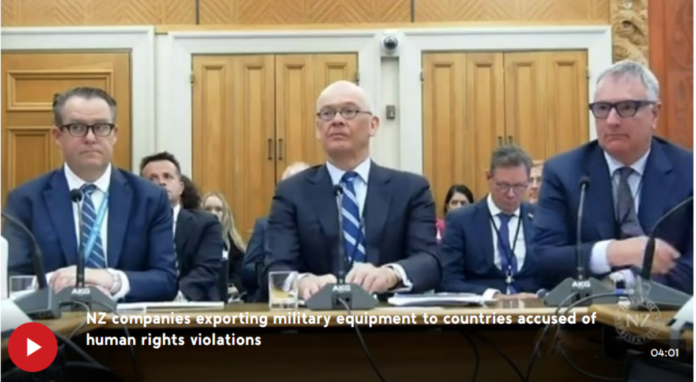 Revelations that foreign affairs officials have approved the sale of military equipment to a host of human-rights-abusing countries, including Israel, is an outrage.

In recent years senior foreign affairs staff have advised successive ministers of foreign affairs to prioritise trade above other considerations such as human rights. They have been given approval, rather than government ministers, to decide which countries will be able to receive New Zealand exports of military equipment.

The tragic outcome was seen in Friday night’s Television One story which includes this:

In the last three years, the ministry has received 256 applications for military exports to 41 countries and territories it has declined just one, that was an export to Saudi Arabia in 2019.

1 NEWS understands that was rejected because Saudi Government assassins had recently murdered the journalist Jamal Khashoggi at their consulate in Turkey.

Among the list of approvals are Indonesia (guilty of murder and mayhem against the indigenous people of West Papua who are fighting for independence and self-determination) Israel (guilty of grave abuses of human rights and war crimes against the Palestinian people) the United Arab Emirates (a medieval despotic regime) and Turkey (its democracy has been seriously degraded in recent years with numerous breaches of civil, political and human rights)

In Israel’s case the situation is even more galling because New Zealand has also been importing military equipment from Israel which has been “battle-tested” on the civilian Palestinian population.

In 2012 the New Zealand Superfund withdrew investments from Israel’s largest weapons manufacturer, Elbit Systems Limited, because it was involved in grave breaches of international law through building Israel’s “apartheid wall” which the International Court of Justice declared in serious breach of international law.

Despite this the New Zealand Defence Force continues to purchase military equipment from this violator of international law and human rights.

Meanwhile these same unelected officials pressure successive governments about which human rights abuses around the world to ignore and which ones to highlight.

Their advice has led Minister of Foreign Affairs Nanaia Mahuta to go softly on Israel’s human rights abuses against Palestinians and Indonesia’s bloody campaign against the people of West Papua while continuing to allow the importation of “blood phosphate” from Western Sahara. Ironically these three cases involve struggles for self-determination by indigenous people against colonisation – something Nanaia Mahuta said would be a point of difference for her.

The government needs to wrench control of official advice from the trade-first and US-first-at-all-costs mandarins in the Minister Foreign Affairs.

We should speak clearly against human rights abuses wherever they occur. Ethics and morality should be the guiding principles we follow rather than sycophancy to the biggest schoolyard bullies.