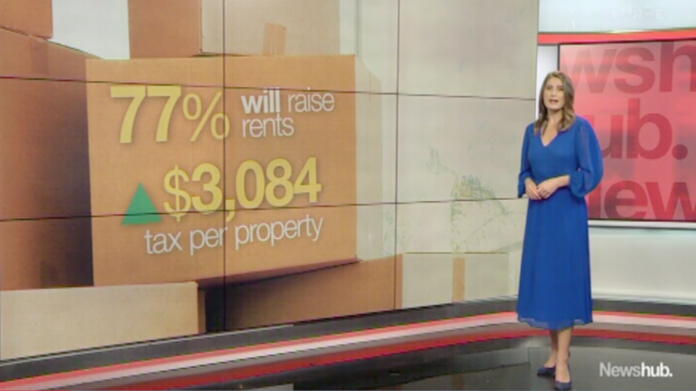 They are on social media gloating that they will punish renters and they should be immediately arrested for cartel behaviour!

Landlords could face jail if they form rent cartels

Landlords teaming up to raise rents en masse in response to the new tax rules could potentially end up behind bars.

A new law in effect from Thursday criminalises cartels, with anyone convicted facing up to seven years behind bars.

“The introduction of possible imprisonment for cartel conduct underlines just how serious and harmful this offending is.”

This is a class war the scumlord property speculators are trying to start, this is a political attack on renters!

These scumlords have had massive Government subsidies with the accommodation allowance on top of tax free gains on top of tax loop holes, now they are having those tax loopholes closed, they are starting a class war against renters.

Grant can not shovel $60billion into the pockets of property speculators, have the house prices explode, frantically close tax loopholes, and then just wash his hands like Pontius Pilate and say, ‘it ain’t my fault’ when scumlords fulfilled their vengeance promises against renters…

Finance Minister Grant Robertson, the face of the Government’s housing changes last month, argues reforms to interest deductibility should not be causing any landlords to evict their tenants yet.

…and yet they are Grant!

You have to protect renters because they sure as hell will blame Labour if rents go up!

Not all landlords are scum, there are great, kind landlords who deserve respect and support, but there are an enormous amount of scumlords and if Grant won’t protect us, then radical action against scumlords will be required!

Scumlords, once identified, should be open to a range of radical responses that will include breaking into any home once tenants have been kicked out and destroying the property so that scumlords are stuck with enormous cleaning costs every time they kick out a renter.

I’ve said it once, i’ll say it a million times more.

We need a Ministry of Works to build 50 000 green State Houses to remove the desperation in the rental market and crash Landlord privilege.

Grant either steps in to protect renters, or radical renters will arrange vigilante teams to fightback themselves.