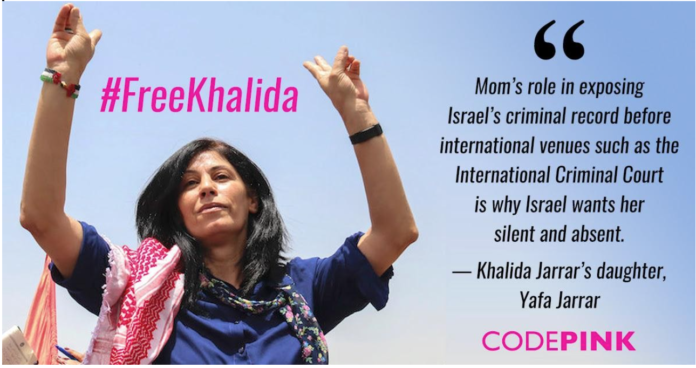 Khalida Jarrar, a Palestinian feminist,  lawyer, educator, elected parliamentarian,   has been a human rights activist for many years.

Her activism  in support of Palestinian prisoners, as the director of Addameer, a Prisoners’ Support and Human Rights NGO in  Ramallah West bank,  draws the ire of the Israeli regime.

But it’s her efforts over the years to take Israel to the International Criminal Court (ICC) that especially angers the regime.

Her first of several arrests began on 8 March 1989 when she was detained for participating in a demonstration on International Women’s Day.

A few days ago, on 01 March, she was sentenced to 2 years imprisonment..just in time for International Women’s Day 2021.

Khalida has been arrested many times.

The current ‘legal’ situation began on  2 July 2017, when she was  detained by the Israeli regime for an alleged offense related to national security.

In June, 2018, her detention was extended for another four months,  then renewed  until 28 February 2019. She was released on 28 February 2019 after 20 months in ‘administrative detention’, ie without any charge or trial made against her.

But the Occupation regime was not through with her.

Khalida Jarrar  was rearrested on October 2019, by over 70 armed Israeli soldiers who invaded her Ramallah home. She is currently held, as usual, under an  Israeli law known as ‘administrative detention’. This law, used frequently against Palestinians,  is inconsistent with international law, inconsistent with the most basic requirements of fair trial in democratic countries, as prisoners are incarcerated for prolonged periods, without charge or due process.

The recent sentence means that the 57-year old lawyer,  human rights activist, with serious health problems, will not be released until the end of October 2021.

Isn’t it long past time for the West to stop ignoring the many atrocities committed by the Israeli regime? Silence is complicity.

International Women’s Day 2021 should be the day that Kiwi women demanded that Khalida Jarrar be released..demanded too that our women MPs showed some backbone and passion too, by  demanding that the Israeli regime release this woman.