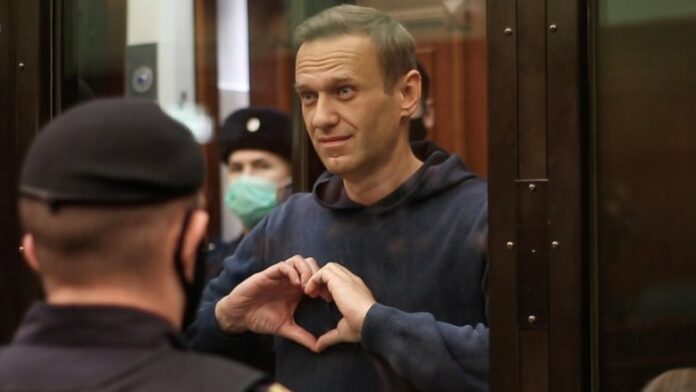 So Alexei Navalny is sentenced to three and a half years for being poisoned.

The Russians like to kill enemies of the State in unique ways which make it clearly identifiable that it was them, while they stare grimly into the face of global condemnation and sing a dead eyed karaoke performance of, “It wasn’t me”, by Shaggy.

So you can imagine Russia’s rage when someone has the temerity of surviving a poisoning and has the audacity of breaching bail conditions by flying to Germany for treatment and then returns to Russia.

Jailing Navalny for breaching his bail conditions because he flew outside Russia to get medical treatment for a poisoning that was most likely carried out by Russia is such an extraordinary outrage the people of Russia have protested in the tens of thousands and have beaten and arrested in the thousands.

There comes a point when the irrationality and contempt of the State becomes so great you simply can’t tolerate it any longer. Imprisoning a critic of Putin for breaching parole conditions because they flew out of the country for medical treatment from an attempted assassination is pretty incredulous.

I’ve always sided with Russia on most things because the hypocrisy of Western Imperialism is sometimes too great, but on this, Putin only displays the fragile grasp on power all ruthless regimes face when their abuse of power becomes too contemptuous for the common person on the street.

Social media allows that rage to gain focus, we saw that with the Orange Lives Matter Insurrection.

China will be watching with great interest the speed of opposition to Putin and attempting to learn from any Russian mistake that allows the system to be challenged because China runs the risk of internal dissent as well.

Increasingly there is an argument that while there was no grand conspiracy to bioengineer the Covid virus and that all the science tells us the virus originated in animals, there is a possibility that the virus leaked accidentally from a Chinese lab from infected animals.

The cables had been sent to Washington in 2018 after the officials had visited the Wuhan Institute of Virology—the first lab in China with a Biosafety Level 4 rating, meaning it has the security for working with the world’s most dangerous pathogens—and been told of safety concerns there. “During interactions with scientists at the WIV laboratory, they noted the new lab has a serious shortage of appropriately trained technicians and investigators needed to safely operate this high-containment laboratory,” one of the cables said, urging the government to send additional support to the lab and stressing how important the WIV’s work was for “future emerging coronavirus outbreak prediction and prevention.”

…Trump didn’t end up actually doing anything to bolster funds for these labs and the rest is history. The reality is that there is a long list of accidental releases from these types of labs…

The modern era of pathogen releases can be said to have begun in 1973 in England, when a lab assistant working with smallpox infected herself and spread it to three others, two of whom died. Four years later, smallpox was almost officially eradicated from the wild, yet the following year a medical photographer at Birmingham Medical School mysteriously died of the disease. It turned out that researchers in another part of the building were experimenting with smallpox, and the virus most likely reached the photographer through the ventilation system.

There’s already been one lab-caused mini-pandemic, in 1977, when a strain of influenza erupted in China and swept the globe. (Luckily, it was a mild one.) Flu strains are famous for constantly mutating, but this one was nearly identical to one last seen in the 1950s, meaning it had been held somewhere in suspended animation. Suspicion fell on the Soviet Union’s robust bioweapons program, but researchers concluded the pathogen had more likely been released during a vaccine trial gone wrong. Nobody fessed up.

The Soviets got their moment in 1979, when a cloud of anthrax spores escaped a secret bioweapons lab when an air filter wasn’t properly replaced after maintenance. The spores killed at least 66 people in the adjacent town of Sverdlovsk. The Soviets aggressively denied it, but American intelligence was suspicious. The incident was only confirmed in 1992, after the fall of the Soviet Union, when President Boris Yeltsin invited an independent team of scientists to investigate.

The best protocols in the world can’t eliminate human error, which is the cause of most accidents in high containment biolabs. Official incident reports read like something from the Springfield Nuclear Power Plant in The Simpsons. A wrench got caught in the lid of a centrifuge and kicked over a tray of pathogens. An animal cage containing bedding potentially contaminated with novel SARS coronavirus got knocked over by a freezer door and spilled its contents onto the floor. Liquids aerosolize. Lab mosquitoes can escape. Lab rats bite. Lab technicians attempting to inject lab animals accidentally hit their own fingers. Often, as the Laboratory-Acquired Infection Database reveals, there’s no smoking gun explaining how the researcher got infected. Nature finds a way.

This happens even in well-run labs. The National Institute for Allergies and Infectious Diseases estimates that, at their labs, a lab-acquired infection will occur once for every 600,000 hours of work. That’s really low, and if there were just a few scientists working with these pathogens, the odds of an accident would also stay low. But with hundreds, maybe even thousands of such labs proliferating around the world, even low-probability events can become relatively common.

…because of the prevalence of these types of labs and with human error factored in, there is an 80 percent chance of a a dangerous pathogen escape every 12.8 years.

So the possibility that Covid accidentally leaked from the lab that was studying this very virus in dead bats is actually not that impossible.

Seeing as China are already on the hook for lying about the true extent of the pandemic, had secretly bought up all the global safety equipment while telling us it was ok and grossly under reported the deaths, any evidence that Covid accidentally came out of a lab will have Chinese citizens demanding angry answers and a planet demanding angry compensation.

This could be the real reason China have aggressively upped their rhetoric for war. A country desperately wanting to distract a planet away from their culpability in a global pandemic will want to lash out first.

China will be watching how Putin stamps down Navalny protests because they may have to be be doing it soon themselves.