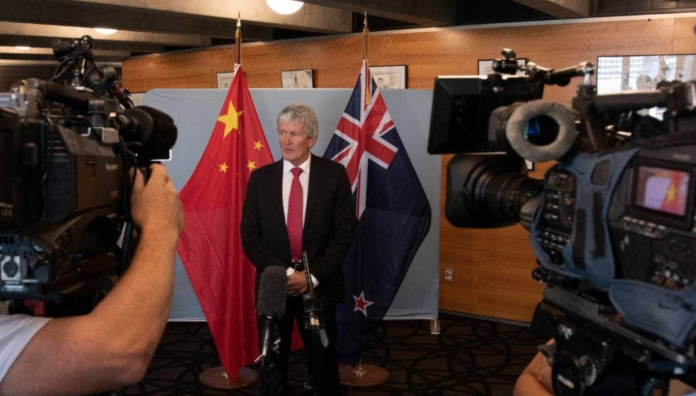 Damien O’Conner ends up being an apologist to Chinese aggression…

O’Connor on Tuesday sparked trans-Tasman tensions after saying Australia “should follow us and show respect” to China in a broadcast interview, weighing into a worsening rift between the two countries.

Strategic studies professor Robert Ayson​, of Victoria University, said while there would be ministers and officials who think Australia has been a bit hard on China, “that doesn’t mean you say it”.

…there are 3 main domestic reasons for the desire to drop Australia in it with China.

Australia is America’s stooge & 5 Eye failure to warn: There is a deep feeling that Australia is simply America’s stooge, this reached crescendo in the Bush era and there is a deep suspicion that Australia would knife us in a second if America asked them. So any attempt to ratchet up conflict by Australia with China is viewed as coming from Washington. Add to this the deep anger many NZ Officials feel at the lack of 5 Eyes warning over the Covid and there is a feeling that Australia and America are arrogant arseholes whose friendship to us is as meaningless as honesty is to Trump.

501s & Treatment of Kiwis in Australia: The second class citizen treatment of Kiwis in Australia has always created deep tension, especially because we don’t treat them like that, but what has really soured things of late has been the forced repatriation of Australian Kiwis under the 501 law. This has seen an unprecedented culture change in the NZ gang scene with feral 501s using a level of violence the domestic Gangs in NZ never used previously. We now have almost 2000 dangerous and criminally violent expats being forced into our country and the tsunami of gun violence over the meth trade has lit a civil war on NZ streets.

Kiwi’s are woke cocks and economic cowards when it comes to criticising China: One thing in China’s favour with NZ is that we are economic cowards AND we are woke cocks. The activist woke see their own skills as globally transferable so protect migrant rights because they are their own economic rights meaning anyone critical of China is immediately racist. This inane micro aggression policing to protect one of the largest abusers of human rights in the world would be hilarious if it weren’t so fucking stupid. When you see everything through the identity politics lens, you lose the far bigger picture. At the beginning of the pandemic, many NZ woke were screaming anyone complaining about China were racist, this at the time when China were lying about the virus, were secretly buying up all the PPE and were still allowing their sick and infected to travel to the West.

So there are 3 main friction points between NZ and Australia when it comes to China, but if a negotiation with Australia over the 501s can be established, maybe NZ should be standing up with our neighbour against Chinese AND American hegemony.

China: The fear of domestic insurrection is driving China’s antagonistic Wolf Diplomacy. China needs to quell internal dissent by establishing Nationalistic fervour. Xi is warning his people about an upcoming event,  China is refusing to recognise British passports and are preparing for war in the South China Sea to establish their territorial lies. Whether we like it or not, China is gearing up for conflict, now we don’t want to get involved in any crazy military confrontation with Beijing, but China’s aggression can’t be appeased. NZ needs to think more about a united front with Australia because Australia is FAR preferable to us as a regime than China ever will be. Economically decoupling from China and getting closer to Australia is our only way forward if China is gong to start military aggression in the South China Sea.

Facebook & Google (America): Australia is threatening to tax Google and Facebook, ring fence that tax and redistribute it for journalism It’s the argument I’ve been making that we need to do in NZ to reset our media landscape and regulate it. Facebook and Google are retaliating by threatening to cut connections to Australia, and we should be again standing shoulder to shoulder with Australia and pledge the exact same tax and work alongside them to implement it because fuck Google and fuck Facebook.

The turning point I think for NZ will be any information that concludes Covid was accidentally leaked from a Chinese lab, then and only then will the woke be forced to shut up and that information going public would probably force China to respond aggressively.

Facebook has already shown itself to do little more than inflame extremism and Google is a digital monopoly – both need to be broken up.

NZs desire to be an independent voice amongst a sea of Titans is admirable, but I fear events themselves are going to force our hand.