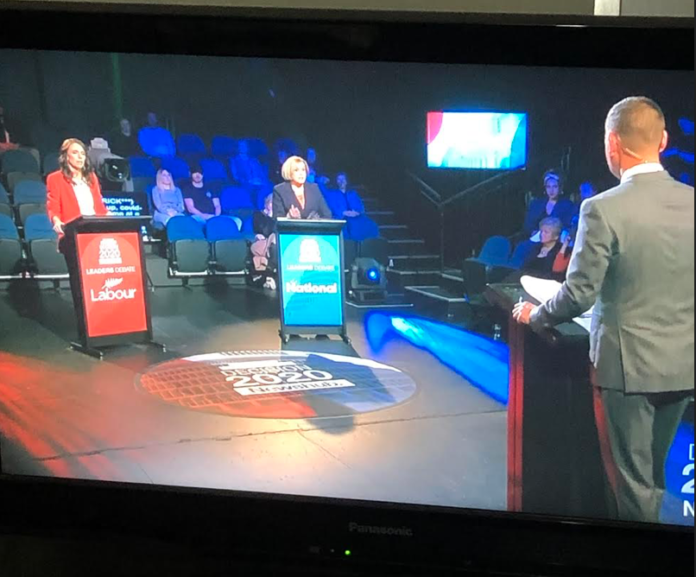 The winner of the Leaders Debate is Paddy Gower – such insightful, hard, interesting & well researched questions – it was a GREAT genuine battle of ideas because of his skills as a broadcaster – standing ovation Paddy, what a remarkable piece of democratic service you crafted.

This was excellent broadcasting.

Compare the genuine insight managed here to the horror show that was Trump vs Biden.

Congratulations to Mediaworks, this beats everything else so far.

Jacinda Ardern came to fight and she did.

She punched, jabbed and pushed Judith around the studio.

Judith spluttered, bumbled around and got genuinely angry a couple of times.

Jacinda was assertive without being rude, and she worked the actual vision NZers are demanding to hear.

Where are we going with a closed border?

How does tourism that was servicing 4million per year now going to serve a fraction of that?

Same thing with migrant workers and international tourists. The junk cheap economy we created around exploitation have all evaporated, Jacinda talked about pricing in our Covid Free status and it was the first time anyone has actually acknowledged that’s our advantage.

The issue of tax cuts when so much needs to be spent by the State seemed juvenile as a response by Judith.

Jacinda reminds everyone that every country has taken on debt and that we are in a far better place than everyone else.

When Judith starts losing the debate she starts interrupting and reminding everyone how mercenary she is.

It didn’t come across as tough, it came across like being a dick.

Judith was a bit of a dick, she knew this was a different gear Jacinda she was facing and it showed.

National’s insane decision to push ahead with removing the right to silence is just bullshit. You don’t throw out a 500 year legal right just because Judith is in a shitty mood.

Jacinda’s lack of leadership on cannabis is woeful.

Judith’s lack of leadership on everything else is slightly more woeful.

Both looked bad on the lack of Pharmac funding for drugs that really do need to be funded to alleviate the terrible suffering those kiwis are going through.

Judith seems to think that not eating meat is communist???

Gower hounded Judith on her climate denial roll backs on all environmental regulations. It was good.

Judith was no slouch, but Jacinda’s improvement had her head and shoulders over the Crusher.

Jacinda showed she could take a punch AND throw a punch. Judith was solid, but her jaw looked glass a few times.