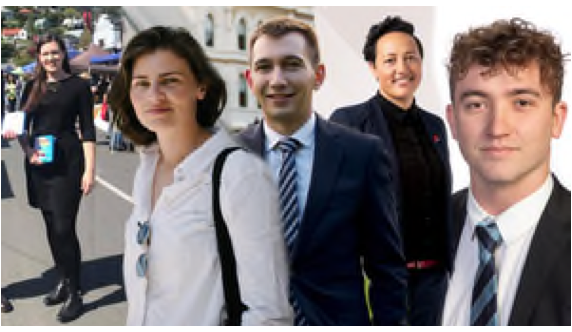 TVNZ were trying to be so hip they couldn’t see over their own bum.

They got down with the kids tonight in a Yuff debate that was as painful as it sounds.

Jack humiliated each of the candidates with photos of them as 18 year olds, which is funny because Jack hasn’t physically aged for 25 years.

Kiri Allan is so great. I want her as Minister for Youth Affairs. She’s choice as.

Simeon Brown is uptight and whiter than pink volcanic salt.

Brooke van Veldon is Head of Slytherin House, ACT wants to side with cancer because fighting it is state intervention in metastasising tumours rights to spread.

Chloe is a fucking legend. I will be so genuinely upset ion the Greens doing get back in, she is easily the best voice of the entire youth generation.

Robert Griffith is some wide eyed NZ First believer. He has a thick neck, he looks like a Rugby Captain from some fancy provisional private boys college. He gives Jack some lip and smack back which is remarkable over confidence for someone with that thick a neck. Robert mouthing off at Jack wins him no friends.

Chloe won the debate hands down.

Kiri Allen was a really close second, she is a star in Labour.

Brooke van Veldon was delusional in her free market nonsense but at least had what you could call a working ideology where as Simeon had no clue what he had to say other than bullshit managerial talking points about ‘making a plan’.

Robert is a cock.

If Kiri and Chloe are the future political leaders of tomorrow, we are lucky.

Brooke is so cold blooded she makes crocodiles look warm, Simeon is the new Nick Smith and Robert is a cock.