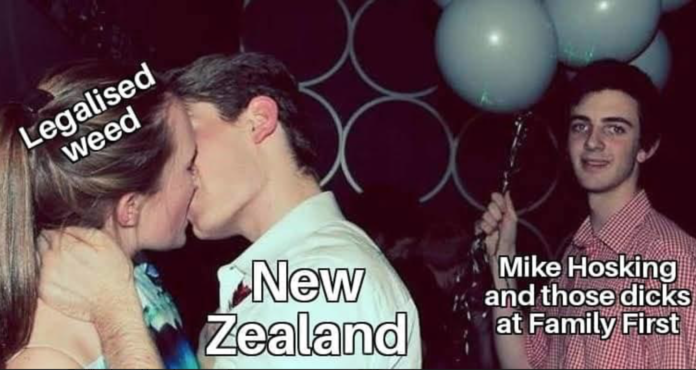 Just as we are debating the cannabis referendum and the madness of continuing the failed war on drugs, synthetic cannabis pops its head up again…

AMB-FUBINACA, a synthetic cannabinoid 100 times stronger than weed, is back in NZ

A synthetic cannabinoid drug said to be up to 100 times stronger than the real thing is back in New Zealand, just weeks after apparently being wiped out.

AMB-FUBINACA has been linked to dozens of deaths, providing a massive hit that can leave users acting like “zombies”.

“The synthetic cannabinoid AMB-FUBINACA has been detected in a number of locations across New Zealand,” an update on the Government’s (DIA) High Alert website said on Tuesday.

“This is particularly concerning as AMB-FUBINACA has been one of the most deadly illicit substances in NZ in recent years, having been responsible for the majority of [drug] fatalities in 2017-2019.”

NZ passed a law to legalise the synthetic cannabis market, Key got cold feet over testing on animals, no guidelines were established, product hundreds of times more powerful than the originals flooded the unregulated market, the media breathlessly highlighted those loopholes, the Parliament panicked and made them illegal again, the market was forced under ground and dozens and dozens and dozens of NZers died from overdoses because it was run by gangs with no quality control.

And the sickest part of all of that is the synthetic cannabis was far more deadly than just ordinary cannabis!

WE WOULDN’T HAVE HAD A SYNTHETIC MARKET OF THE REAL STUFF WAS LEGAL!

MPs panicked last time and it saw more than 70 die from overdoses.

Their continued cowardice in the face of the war on drugs is why we can’t get actual progress.

A regulated cannabis market would stop any demand for synthetic cannabis, what is wrong with the NZ Public that they can’t see the difference here?

Vote yes in the cannabis referendum!