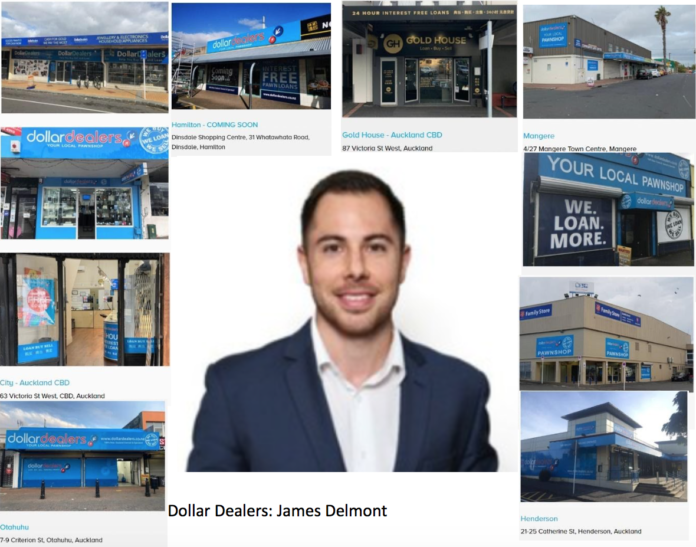 This morning we were supposed to be in Mediation with James Delmont, the boss of Dollar Dealers – the Auckland pawn shop chain. But he’s a no-show. Apparently, he’s made other plans.

Delmont has managed to worm his way out of fronting for sacking two workers during the first COVID 19 lockdown. The Mediation Service told us at 4pm yesterday they no longer had a mediator available in Auckland. They offered a zoom conference call instead, with a mediator from Christchurch. Delmont quickly latched onto this opportunity, insisting it had to be face-to-face or nothing. Pathetically, the Mediation Service offered him a time seven weeks from now.

When I got back to my office and was told this, I went off my head. Delmont sacked two workers, without notice, pretending it was a redundancy issue. He then pocketed their wage subsidy. This was 20 weeks ago in May. These workers have been waiting since then to have Delmont attend a mediation and explain his actions. However, Auckland’s Mediation Service are so disorganised they blithely decided these workers could wait another 7 weeks. That would mean the workers would have to wait 6 months just to get to the first step. I have another case where the bosses are taking a worker to mediation. They got a date within two weeks. Disgraceful. I wasn’t having any of this crap. After a very ‘assertive’ discussion with the Mediation office, they managed to find a mediator after all.

Although the whole process, since we were advised there was no mediator to then finding one, took less than two hours, Delmont said he had made other plans that couldn’t be changed. Really? Maybe he had a hair appointment that had opened up.

However, he did find the time to try and contact one of the workers from his cell phone. He was advised from the start he wasn’t permitted to contact a former employee once the legal process commenced. In the criminal courts it’s a crime to contact witnesses. It’s called intimidation. Of course he didn’t respond to me when I asked him to explain himself. Some people like Delmont believe rules and good behaviour don’t apply to them.

I met the two workers last night for our prearranged meeting and advised them the mediation was off. They were obviously very upset. One hasn’t been able to find work during the COVID 19 pandemic, and the other had taken a day off from work to attend the Mediation and wouldn’t be able to work today. Just the cost of getting to my office is a burden. Delmont and his ilk who abuse others are oblivious to this reality for working class people these days, and if they did know – they wouldn’t give a toss.

After debriefing with the two workers, I realised the case against Delmont and Dollar Dealers is even worse than I thought. When we first raised the dismissals in May, some unnamed “HR” person sent an extensive, elaborate redundancy process they claimed they had used. Last night the workers tell me nothing of the sort happened. They were the only two employees the company had spoken to about potential redundancies. Originally, Dollar Dealers said they would pay them the COVID wage subsidy. This was our tax money, which we gave to bosses so jobs could be protected. But Delmont told them at their termination meeting that he had changed his mind and he “would keep the money because he could.” They got just four days’ pay in lieu of notice and walked off the job immediately.

Right from the start, I wondered why these two women were targeted. Last night it became clear. When the lockdown started Dollar Dealers announced all employees would have to use their accrued holiday leave. Both these women had challenged management’s right to do this without consultation. Shortly after they were told they were being made “redundant”.

When my union got involved it became apparent Delmont had concocted an elaborate fabrication that it was a legitimate redundancy due to COVID 19. I never believed it, because no business with 69 employees would go through an entire redundancy process just to make two workers redundant. Especially as their normal monthly staff turnover is three. Advertising vacancies on SEEK within a month gives the game away.

The women say since my previous Daily Blog article they have received dozens of stories from current and former employees on the outright dishonesty and corrupt practices carried out by this company. I have asked they send this information to me for future publication.

In summary though, it works like this. Desperate people come in with family jewellery and other expensive heirlooms to use as collateral for short term loans. They get the loan for a fraction of what the items are worth. After deducting an ‘administration fee’ they get charged 35% interest. Many can’t meet the payment schedule and their goods are forfeited. They can be then resold for up to ten times the loan made to the former owner. In the US, they used to call these people the Mafia. It’s legal here.

Skimming through social media pages show the extended Delmont family are clearly part of the ‘rich and famous’ lifestyle crowd. It seems their beautiful lives and privileges have been largely possible through the misfortunes of the poor. I note all the Dollar Dealer stores are in working class areas, whilst members of the extended Delmont family live in palatial mansions in the leafy suburbs.

When you absorb what types of people would run a business model like that, it’s easy to see why Delmont would have no problem sacking two employees and then pretend otherwise.

As you’d expect under the COVID 19 climate, business is booming for loan sharks. Dollar Dealers is soon to open up a new store in Hamilton. Our UTU bus should be up and running by then. We are looking forward to attending the launch party to expose their practices to the good people of Hamilton.

I was always prepared to reach a fair outcome for these workers. Clearly it’s not in Delmont’s character to consider that. I presume that’s because his whole life is about taking advantage of other people, so why would he stop now.

I’ve written to him this morning (attaching this article) and amended our claim for the two workers. We will claim compensation for their normal wages from the time they were sacked (that’s $16,000 each in lost wages for the last 20 weeks) and I will add their normal weekly wage $800 a week until this matter is settled. For the stress and fear he has caused these two women he’s going to have to do the right thing and compensate them for $10,000. I’m adding the 3% monthly interest, he charges his clients. Workers should never have to pay to get justice from an unscrupulous boss, so he’ll get our invoice too.

If you have any information on James Delmont or Dollar Dealers, or would like to help, contact us at justice@oneunion.org.nz

We have our campaign bus ready for action to support a campaign to end exploitation. We are looking forward to visiting Hamilton for Dollar Dealers’ opening of their new store. We would appreciate any koha to get on the road. Click here.

Matt McCarten is the National Director of One Union and a Trustee of UTU For The People. 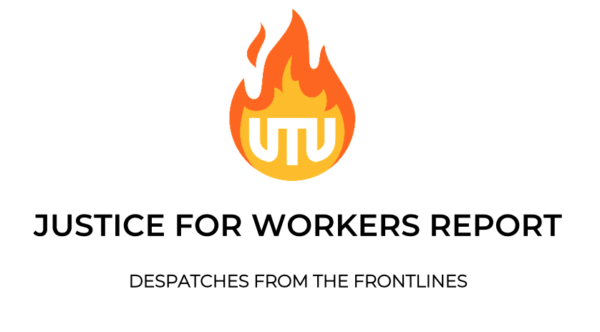