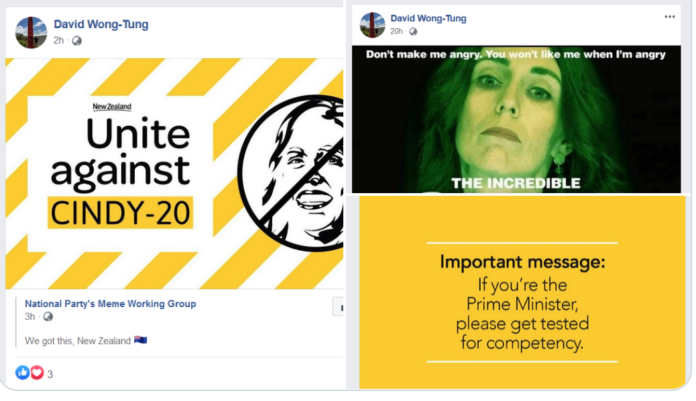 National Party leader Judith Collins has responded to criticism of her husband David Wong-Tung sharing anti-Jacinda Ardern memes on social medial, saying it’s not something she would do.

“We’ve been together for 41 years. I’ve never been able to get him to do anything I tell him to do so,” Collins said on Monday. “I’ve just said to him, well it’s not something I would do, but he’s an adult and he makes his own decisions.”

So Judith is the reasonable one?

Look, David Wong-Tung has every right to post whatever he likes within the law, this is a liberal progressive democracy and Clarke isn’t shy about getting political in his social media feed either.

So Wong-Tung posting isn’t the issue.

How much of an immature arsehole must you be to be pulling stunts like this?

Does he graduate to pet kidnappings in his 70s or calling ZB Talkback as Merv?

Faster than you can say ‘Kauri-swamp-logs-Oravida’, David has helped remind us all that replacing Jacinda with Judith wouldn’t be the only trauma of National winning in October, we would gain a childish octogenarian as the First Gentleman as well.