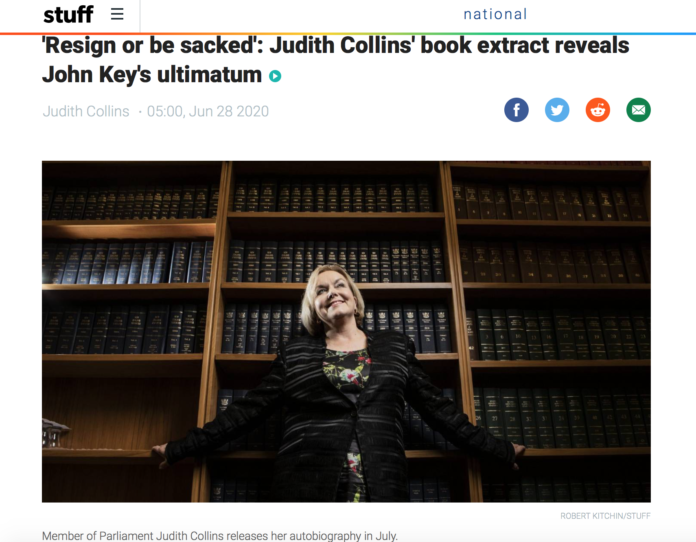 According to Judith Collins, “Key threw me under a bus” – according to Stuff reporting on her memoirs which I have not and won’t read.

At a time when National is striving to make ground as a united front after the bloodletting of Bridges and Bennett, one might conclude that this book release at this time of the election cycle, comes perilously close to, throwing National under a bus?

I was never a fan of John Key, but I am politically astute enough to understand that this former Prime Minister, now safely ensconced on various high-powered boards, still has a network of believers inside caucus – Mr. Luxon, former Air NZ boss, being one who readily comes to mind.

Logic suggests to me, that pay-back by Judith against John Key at this point, won’t go down well within the Blue Bastion.  Which raises the question: Has Mz Collins figured out that she has missed the bus (excuse the pun), so has nothing to lose?

Speaking of being thrown under a bus.

In 2018 when I spoke to the Head Hunters I was at the time on the Executive Committee of Judith Collin’s electorate and specifically was appointed to (a) her reselection sub committee and (b) the fund raising subcommittee. [I have witnesses to these appointments.]

When I spoke to the Head Hunters, based on her comments which followed in the Herald, Collins appears to have taken umbrage at me having the audacity to exercise my rights to speak to whomever I chose.   Sometimes it has been Rotary, other times Lions and on this occasion, a gang.

The NZ Herald, quote Collins reference to me:

Meurant wasn’t – as had been reported – on the committee. Instead, she said he was an “active party member” who “has a role but it’s a very small role”.

His views were not her views, she said. “They couldn’t be any more different.”

Her comments were inaccurate to say the least.  But rather than start a public scrap to defend my honour, I put the National Party ahead of the indignity I endured; said nuffin – and quietly walked away.

Today however, speaking as we are of being thrown under a bus, I thought it might be an appropriate time to put the record.