Alpha CEO clad in Lycra ambition, Todd Muller’s unusual excitement at winning his long coveted dream to usurp the  democratic process by House of Cards machinations and rule forever got off to a rocky start as he accidentally tripped and fell into the lava chamber of Mt Doom.

All National Party Leadership spills have traditionally been held in Mordor and Todd’s was no different, but the moment he had the leadership he started madly dancing around on the lip of the Wellington volcano screaming, ‘My precious, my precious’.

He is said to have accidentally tripped on Matthew Hooton’s tongue and fallen back first into Mt Doom’s famously hot liquid magma.

As he fell under 30%, he spluttered something about beating Jacinda in September and thanked the Father, the Son and the Holy Farmer for his win.

His last gasp before being swallowed by a river of golden basalt slag was, “I even wrote a book as a 10-year-old that saw me elected vice president, become president upon the very unfortunate death of the then-president and then go on to serve 13 consecutive terms.”

Todd Muller is survived by his ego. 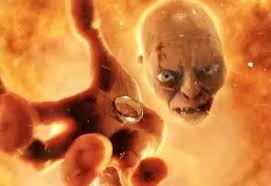