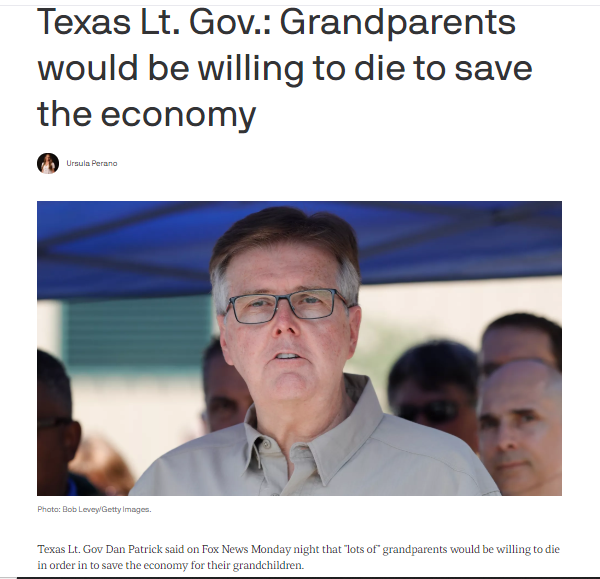 There is a quotation often attributed to Lenin, in which it is said that when it comes time to hang the capitalists – they will fall over each other to attempt to sell their executioners the rope.

Now, I do not invoke this axiom to attempt to urge a death-sentence against this Texan. Going by his own words, he seems more than eager to initiate such a thing upon himself, in order to secure the delusory promise of a few days of scrounged together economic ‘stabilization’.

For that is all that would likely eventuate were America to turn upon the proverbial dime and ditch physical/social distancing and lockdown protocols to go back to “business as usual” (as Trump appears now keen to do) … isn’t even a temporary uptick in economic activity – it’s just a brief arrest of the ongoing crisis-pandemic furthered decline.

Followed by an even more dramatic medium-to-long-term negative impact as the directly attributable result of heightened pressure upon their healthcare system and their workforce through illnesses, disorder, and deaths.

Some Americans in the political and financial spheres, are more afraid of the malaise of a significant downturn in economic activity (or even doing things differently when it comes to economic activity all up), that it is preferable to talk of quite literally “sacrificing” an entire generation in pursuit of its desperate avoidance.

They love largely illusory money (for that is, ultimately, what so much of their stock-market, with its one point five trillion dollar devouring snackatite, actually is), and are prepared to fight to the death to defend it. Human blood and human deaths, in exchange for filthy, filthy lucre.

To be fair and sure, Lt. Gov. Patrick deserves some minimal modicum of ‘credit’ for being prepared to place himself – rhetorically at least – upon the chopping block.

And the issue is not his own willingness in principle to do something daft for his grand-children; because there is something instinctual in the desire to protect one’s progeny and future lineage.

Dependent upon your personal ethical position, you may or may not also have a problem with his endeavouring to force his personal choice in this matter upon every OTHER grandparent in the nation.

But for me, it is quite simple. Doing as these economic right-lemming kinds would wish, does not offer “sacrifice” in exchange for meaningful improvement in circumstances – either for their own generation, or for ours. It shall not leave their country better off a week, three weeks, ten weeks, or twenty eight weeks later from now.

On the contrary, it shall almost certainly extend the misery. Because ‘delayed gratification’ rather than degraded prefrontal cortex critical-thinking-child seeking pseudoconomic sugar-rush-‘stimulus’, is not how their minds appear to work in practice.

This, presumably, is a large part of how we seem to *keep* finding ourselves, every few years, crushed under the weight of “too big to fail” billion-dollar outfits and operators who can’t seem to keep themselves ticking over between largely self-authored crises sans massive government intervention upon their behalf. A variable that requires no globe-spanning contagion other than the ideological one to repeatedly ensue!

And lest this seem like an anti-American beatup … it is important to note that many Americans find all of the above absolutely and axiomatically abhorrent. And, perhaps more concerningly, that it is not only an American ‘disease’ of the mind of which we are speaking.

It was just a week ago that the European Union’s leadership was speaking about the necessity of a balancing act between preventing deaths on the one hand (assumedly also encompassing to a certain extent deaths particularly amidst the older and less wealthy or physically hearty – you know, those for whom the capitalist mill has increasingly less use for as time goes on … both their time in a personal sense, and the general time of the advancement of the economic epoch we presently endure) … and preserving “The Market” and its accompanying actions and profits on the other.

It may be undeniably true that on a long enough time-line, everybody’s survival rate drops to zero … yet these kinds of “acceptable losses” wherein the time-lines of many are foreshortened considerably in order to secure temporary reprieve for the stock-portfolios of the few, is not so much “natural selection” as it is “utterly inhuman”.

Perhaps, in the not too distant and nightmarishly, overbearingly close future, it may be possible for finance-capitalism to exist sans humans. It already seems to do largely well enough with just computers and the hive-like inhabitants of Wall Street, so some might suggest it’s endemically close enough.

Yet until that happens – and, indeed *especially* should that happen, it makes no sense whatsoever to value dollars above lives in the manner these demons are proposing.

If there is to be a “sacrifice”, turn it around – sacrifice a certain modicum of financier-cheque-book, to support the lives and the quality of lives of many ordinary and older people.

Except most peculiar, curious thing – it never seems to get offered like that, does it. It’s always just the other way around.