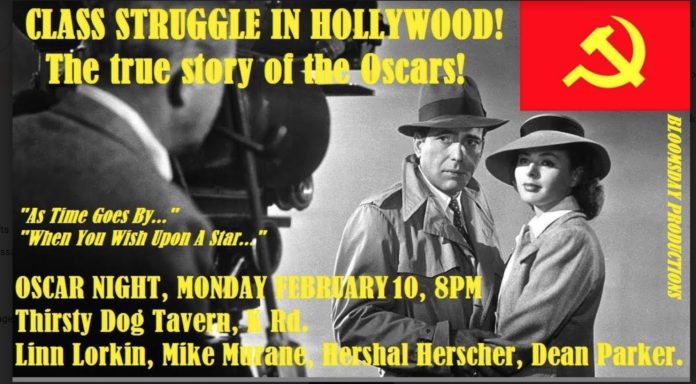 “Trying to get [union] representation from the Academy,” said New York screenwriter and wit Dorothy Parker, “was like trying to get laid in your mother’s house. There was always someone in the parlour, listening.”

Class Struggle in Hollywood! The True Story of the Oscars, coming up at the Thirsty Dog on Karangahape Rd, is a musical show that combines the story of the unionisation of Hollywood in the 1930s and 1940s—particularly of the writers—with a musical backdrop of songs that won Oscars.

The show has been put together to coincide with the first Oscars of the new decade, the 2020 Academy Awards on Monday, Feb 10 (NZ time).

The Academy Awards were set up in 1929 to convince Hollywood writers, actors, producers and directors they were all part of one family and had no need of unions.

After a battle with the studios, Hollywood was finally unionised.

In the 1940s, reaction set in with a witch-hunt conducted by the alarmingly entitled House [of Congress] Un-American Activities Committee. A stream of Hollywood writers and stars were famously subpoenaed before it and asked, “Are you now or have you ever been a member of the American Communist Party?”

“As Time Goes By”, from 1942’s Casablanca, is probably the best-known movie song but didn’t qualify for an Oscar nomination as it wasn’t original—it was written for a 1931 Broadway musical.

Hollywood always has its fascination and Hollywood writers of the 30s are the source of startling biographies and much gossip.

The Auckland Oscars audience will hear it all.

Telling the “Class Struggle in Hollywood” story will be Dean Parker, formerly NZ Writers’ Guild delegate to the Federation of Labour and Council of Trade Unions, and a screenwriter himself (Came A Hot Friday).

Class Struggle in Hollywood! The True Story of the Oscars will be performed straight after this year’s Academy Awards—Monday night, February 10, 8pm, at the Thirsty Dog tavern on Karangahape Rd.