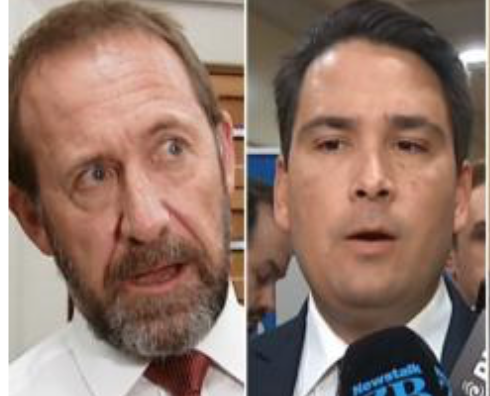 Simon Bridges is grandstanding over the Terrorism Suppression (Control Orders) Bill and Andrew Little has gloriously referred to it as being ‘dicked around’.

Ironically they are fighting over who can be tougher and who can steal headlines, they aren’t discussing the actual civil rights issues highlighted on TDB…

But like with anything the bloody Government suggests, it’s not until you have a deep dive into the fine print that you start seeing a law that has a terribly large amount of worrying holes in it.

The Government want to allow secret evidence to find people guilty of future terror attacks they didn’t know happened using the balance of probabilities as the evidential threshold?

…while Simon is dicking Andrew around, he’s also dicking Radio NZ around by not commenting on a failed technology project eh spent years talking up…

Mr Bridges called a multi-million dollar project the firm was involved in, a revolution.

But it failed, and any benefit to the taxpayer remains unclear. The NZTA unit Connected Journeys Solutions, which approved high-tech projects, was closed down in March this year after flouting public sector controls.

Simon Bridges has declined an RNZ request to talk about his interactions with the Silicon Valley firm, aside from an interview he gave in August.

…come on, Simon, this marvellous tech project that sounds like it gobbled up lots of money for nothing is something you need to front on.

And stop dicking Andrew Little around, if this is about the security of NZ, petty games is beneath the civil rights issued that have been raised.