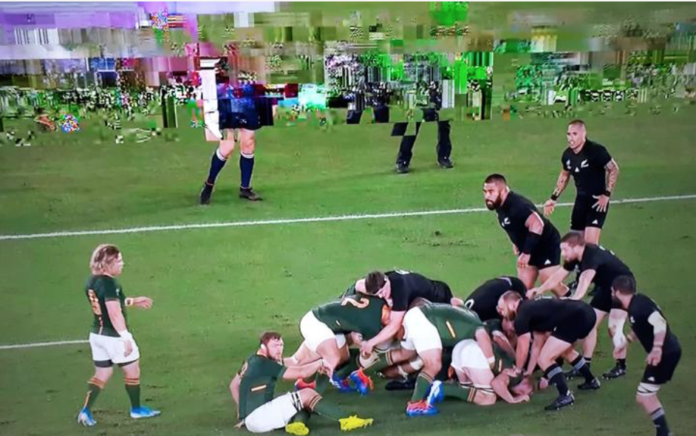 Look, I don’t care about Rugby.

It’s still just fucking around with a ball right?

I mean in terms of human development, there’s not really that much difference between kicking, running, passing, catching skills now than when prehistoric cave people did it.

It’s literally not rocket science or brain surgery is it?

That all said, I get that many of my fellow New Zealanders love Rugby and I will put aside my deep cynicism about a country that defines itself by playing a game that barely anyone else plays to watch the World Cup once every 4 years.

My favourite bit is the Haka. I don’t care much about the game.

But I get that you all love it, and that it is a disproportionately enormous part of how you all define yourselves as New Zealanders. Disappointing as that is, it’s part of our cultural identity and as such it deserves to have some type of broad based access, that’s why I’ve always supported the NZ First policy to make the big matches free to air on public broadcasting.

Winston has fired up and is screaming at Spark because old people get frustrated, confused and angry about the internet the way they do when confronted by Sikhs, Burqa and Women who vote for the Green Party.

New Zealand First has put forward a free-to-air members bill which would have free broadcasts of all rugby, cricket and football world cup events played by New Zealand, domestic rugby tests, and the Olympic and Commonwealth games.

A similar measure is already in place in the United Kingdom, where FIFA men’s World Cup matches, Wimbledon, and the Rugby World Cup final are included.

Across the Tasman, an “anti-siphoning” scheme prevents a pay television company from buying the rights to a major sports match before free-to-air broadcasters have an opportunity to.

But Labour wasn’t willing to back the bill in its coalition agreement, and it hasn’t gone anywhere since it was introduced to Parliament in August 2018.

National party leader Simon Bridges has questioned why Peters is talking a big game, and won’t push the bill forward.

Broadcast minister Kris Faafoi has the answer. He said on Tuesday the “horse had bolted” and there was little interest in pushing free-to-air.

“Times have changed and rugby has become professional. It’s going to be difficult to unscramble that egg.

…Labour are so neoliberal, it even extends to bloody Rugby!

If we all begrudgingly acknowledge that Rugby is part of our cultural identity then allowing corporates to milk that for their own profit margins while robbing the public who make it such a powerful cultural phenomena their connection to it is outrageous.

Make the big games free to air and let’s start investing large sums of money into an Artists Benefit where artists, musicians, writers, poets, dancers, sculptors, carvers, actors are all paid a weekly benefit to produce and make art.

An explosion of art and people paid to produce it would do more for the depression rates, poverty rates, inequality rates and pull us away from the never ending economic growth model fantasy than anything else.

We started with Labour’s neoliberal attitude towards rugby and ended up with an Artists Benefit, I said you wouldn’t see that twist coming.