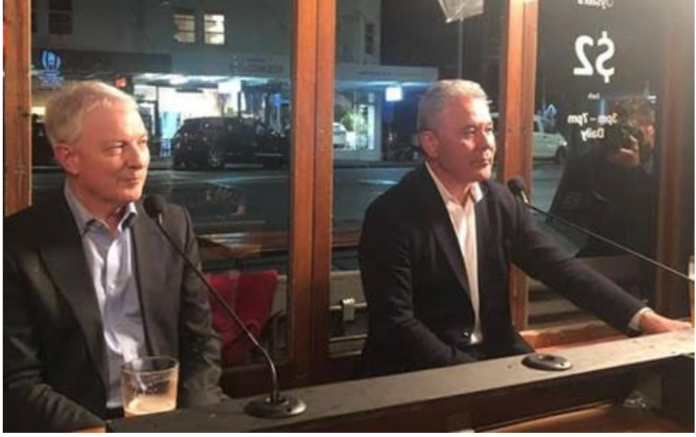 GODWIN’S LAW hardly covers it. Drawing a comparison between the person, or persons, you are arguing with and the Nazi dictator, Adolf Hitler, was identified by US lawyer Mike Godwin, way back in 1990, as the point where meaningful debate ends. There can’t be many in John Tamihere’s mayoral campaign team who would disagree. JT’s “Sieg Heil to that!”, blurted out in response to a Phil Goff soliloquy on Auckland’s diversity has definitely become the takeaway comment from last night’s (17/9/19) bruising Pub Politics Mayoral Debate.

The elation in Goff’s camp may be easily imagined as they watch social media light up in indignation at Tamihere’s intervention. Just when JT’s notoriously right-wing, sexist and homophobic stains were beginning to fade back into his ‘colourful’ past, “there he goes again”, handing his enemies a very large stick and inviting them to beat him to death.

To make the whole debacle even worse, Tamihere explained his “Sieg Heil” quip by referencing Goff’s claim to have de-platformed Stefan Molyneux and Cheryl Southern – the two far-right Canadians prevented from holding a public meeting in Auckland in 2018. Given the views of the banned speakers, the comparison with Hitler was ideologically absurd. If Goff really did harbour Hitlerian tendencies, then he would have welcomed Molyneux and Southern with open arms.

If JT had to make some quip, “Long Live Chairman Phil!” would have sufficed. After all, it’s not just Nazis who censor their opponents, the Reds also have ‘form’ when it comes to putting a muzzle on free speech.

The other factor JT failed to consider before blurting was that, in the grim shadow of the 15 March mosque massacres in Christchurch, Goff’s impulse to de-platform the likes of Molyneux and Southern seems much less high-handed than it does prescient. Speaking up for the free speech rights of alt-right Valkyries and “scientific” racists was a lot easier before one of their gruesome tribe gunned down 51 innocent human-beings in their houses of worship.

So, why did he do it? What was he thinking?

The host of Pub Politics and Daily Blog editor, Martyn Bradbury, put his finger on it in his review of the Goff/Tamihere clash: “Trump and Brexit won by tapping into a deep resentment within the electorate, that resentment exists within Auckland and if JT wins, it will be because he understands that.”

“And because”, Martyn might have added, “he gives it a voice.”

Long before the Internet and its lawmakers, New Zealanders used to describe that all-too-familiar Kiwi stereotype – the authoritarian boss who thinks he knows everything and takes great pleasure in making the lives of everybody below him on the pecking order miserable – as a “Little Hitler”.

Those hard-bitten Kiwi soldiers returning from the Second World War weren’t overly tolerant of such people, and in the days when the trade unions still had some kick, they weren’t frightened to let them know. Blokes of a certain age, and blokesses too, will have no difficulty in recalling those moments when one of these Little Hitlers, having rattled-off their orders, provokes one long-suffering staff-member to raise their arm in a mocking “Sieg Heil!” salute to his retreating back.

And why might a working-class Maori from West Auckland consider Phil Goff to be a “Little Hitler”?

Could it have something to do with an Auckland Council that appears to only have ears for the bicycle-riders and the public transport theoreticians – by refusing to listen to the men and women who are forced to drive half-way across the city to work every morning in a car that gets harder and more expensive to warrant with every passing six months, and whose gas tank cost more to fill – thanks to Phil.

Could it be because when the Mayor waxes eloquent about diversity, the people in his mind’s eye are the wealthy property speculators and business investors from Asia – the ones who pour hundreds-of-thousands of dollars into the pockets of the New Zealand political class. That’s not the sort of diversity that trickles down the walls of those dank dwelling-places where the Maori, Pasifika and poor immigrant workers of Auckland live. Liberal Neoliberals like Mayor Goff don’t run into very many of them at their fundraisers.

At the doors of the Waipareira Trust, however, John Tamihere meets many such people. They come to see the doctors at its medical centre; the dentists at its dental practice. Many come for help with housing (far too many) or for a food parcel to see their kids through the week. Waipareira serves them all.

John Tamihere doesn’t ask for donations from the rich – he provides services to the poor. Has done for thirty years. His words may leave a lot to be desired at times, but you cannot fault his deeds.